DFW Psychics Warn Us of the Red Flags in Fortune Telling 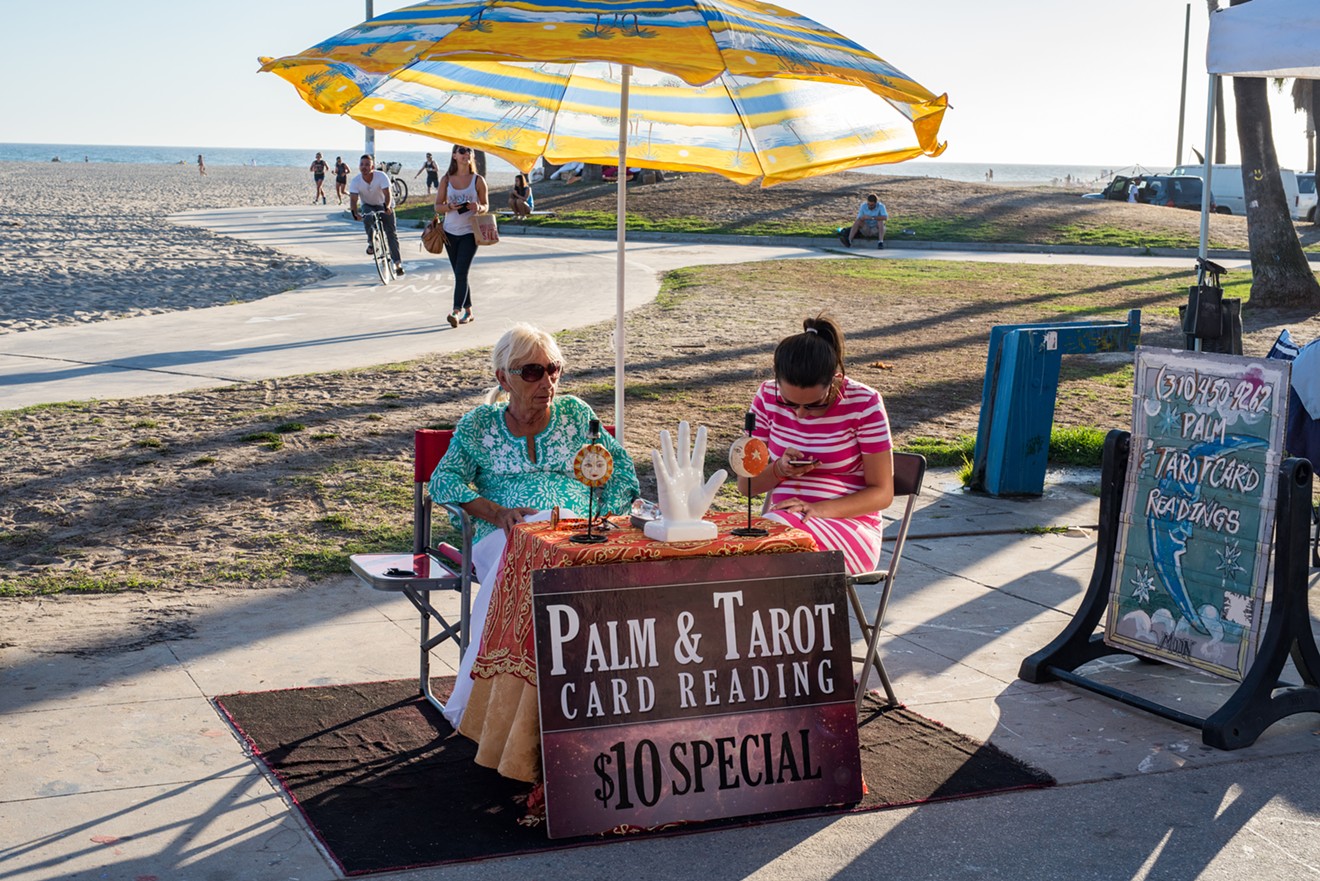 Good psychics aren't typically in a storefront. iStock
Humans have always desired to peer into the future or dive into the afterlife to speak with dead family members. This is increasingly prevalent today, especially in DFW with its monthly Dallas Psychic Fair. However, anyone who has done extensive research on getting their cards read or fortunes told has no doubt scrolled past detailed stories of psychic nightmares. These stories generally consist of unsuspecting victims being told they have a curse or trauma from another life that can only be cured by metaphysical means.

Unfortunately, these spiritual antidotes are not free. Sometimes they cost hundreds of thousands of dollars. Bob Nygaard, a private investigator, has recovered more than $3.5 million in 12 different cases of psychic fraud. We asked some local psychics, mediums and fortune tellers about themselves and to weigh in on the issue of fraudulent members of their industry. (For readers who think that all psychics are frauds and are about to tell us so in the comments, we're making a distinction here between money-grubbing con men and those who sincerely believe in metaphysical oddities, like tarot cards, astrology and God. Now comment.)

Angela Lusk
Lusk says she has been a psychic her whole life. She just did not know it until about 25 years ago when she predicted her mother’s death. Standing in her kitchen one day, sipping a cup of coffee, a powerful voice came to her that said her mother was going to die in three months. Though her mother was not sick, Lusk began calling family members asking if they could check on her. Three months later, she called her mother, who said she felt as though she was coming down with a cold. She asked if she could call Lusk back after laying down for a nap, but she never woke up. This led Lusk to do extensive research into metaphysical practices and fine-tune her psychic muscles.

What she often tells people is to look for psychics who feel comfortable using their full name. If someone claiming to be a reader is using a stage name, they generally have something to hide, she says. Additionally, some of these scams involve the alleged psychic attempting to extend the duration of a reading to get more money out of a client.

“If they give you a definitive price, for a definitive service, then you can guarantee to some degree that you’re dealing with someone who’s not trying to sucker you,” Lusk says.

Her services include psychic readings, spiritual guidance and counseling, and can be booked through her website.

Megan Benanti
Much like Lusk's, Benanti’s psychic journey began with a tragic prediction. In 2000, she knew without a doubt that her unborn child was going to die. After finding out she was right, her friends took her out to The Inwood Lounge to try to cheer her up. There she met a psychic reader who told her she would be good at this practice. She went out the next day and got the materials the reader suggested to her. Every single door to this practice began to open up for her as she began studying it. Even when she would start to lose interest, a friend would approach her with a new set of tools, thrusting her back into the metaphysical industry.

Benanti says people should treat getting a reading like any other service. They should make sure to do their research on their potential psychic, seek out referrals from friends and know the going rates for psychic services.

Though she says she is intuitive without them, Benanti prefers to work with tarot cards, working with her own version of a Celtic 10-card spread. Her rates can be found at tarotdallas.com, where clients can book a reading.

John Cappello
Named American Psychic and Medium Magazine’s Man of the Year in 2017, Cappello says he entered the world of metaphysical practices kicking and screaming. He never thought he would be a psychic. After his father died, Cappello took over the family business. While in his father’s building, people began to say they still felt his presence. For fun, Cappello decided to have a few psychics come in to investigate. He ended up tagging along with them and taking some of their classes, realizing he had some affinity for the work. After running for mayor of Dallas and practicing his new craft for five years, he began doing psychic work professionally. Cappello is not just a psychic. He is a medium. This means he uses information he perceives from spirits to perform his readings.

Although it is a bad business model, Cappello says he encourages clients to only visit him every three to five years. This ensures he does not pull any of his information from his memory of their last reading. He says to watch out for psychics who ask clients to come back frequently for additional information.

“If they keep trying to use you as a piggy bank, that’s wrong,” Cappello says.

He is certified by the American Federation of Certified Psychics and Mediums, and has written three books on the subject. Cappello does private readings over the phone and in person, as well as astrological chart reading. Rates can be found on his website.

Chuck Murphy
Another medium in DFW is Murphy, who has been doing readings since 1990. He kicked it into high gear 10 years later when he began doing psychic work commercially. He earned his master's degree with the University of Metaphysics in Sedona in their distance learning program, and is working toward a doctorate degree in parapsychology. Murphy has been doing this work for about 19 years. He currently teaches psychic development classes to up-and-coming readers. He has an office in McKinney where he hosts sessions with more in the works for Carrollton and Lewisville.

“When I look at something for you, I can see what it’s going to look like now, but you could change your mind tomorrow, and the whole thing shifts.” – Chuck Murphy


Murphy says anyone who claims to be 100 percent accurate should raise red flags. The best psychics are 80 percent correct with their predictions on their best days.

“People forget that this is a free will structure that we live in,” he says. “When I look at something for you, I can see what it’s going to look like now, but you could change your mind tomorrow, and the whole thing shifts.”

He says he does a lot of pro bono work for people he knows are in need. Generally, all he asks is they pay it forward. Murphy is also a spiritual counselor, metaphysician and a paranormal investigator. Booking can be done through his website.

Valentina Burton
When she was young, Valentina Burton always loved entertaining the idea of the metaphysical. This interest has persisted throughout her life. About 10 years ago, Hotel Zaza in Dallas approached Burton about doing evening readings. She has been published in Tarot World Magazine and CBS’ Best Tarot Readers guide. Eventually she left Hotel Zaza to pursue her private practice full time.

Burton says several clients have come to her after giving thousands of dollars to a psychic who has stopped returning their phone calls. Most vulnerable people seeking the help of a reader see a storefront on the side of the road that reads “psychic” in neon lights and think the person inside might have answers to their problems. However, Burton says the opposite is often the case.

“Most of the people that are good are not in a storefront,” she says. “If you’re good, you’re not just sitting around hoping someone wanders in to get a reading.”

Clients get a bird’s-eye view of the patterns in their lives through sessions with Burton, according to her website. She offers hour-long private sessions, fortune telling for private parties and events, and classes on folk magic and fortune telling. These services can be booked via email at [email protected].
KEEP THE DALLAS OBSERVER FREE... Since we started the Dallas Observer, it has been defined as the free, independent voice of Dallas, and we'd like to keep it that way. With local media under siege, it's more important than ever for us to rally support behind funding our local journalism. You can help by participating in our "I Support" program, allowing us to keep offering readers access to our incisive coverage of local news, food and culture with no paywalls.
Make a one-time donation today for as little as $1.