Dan Janjigian, the Original Chris R. from The Room, Makes a Cameo in Pocket Sandwich's Parody 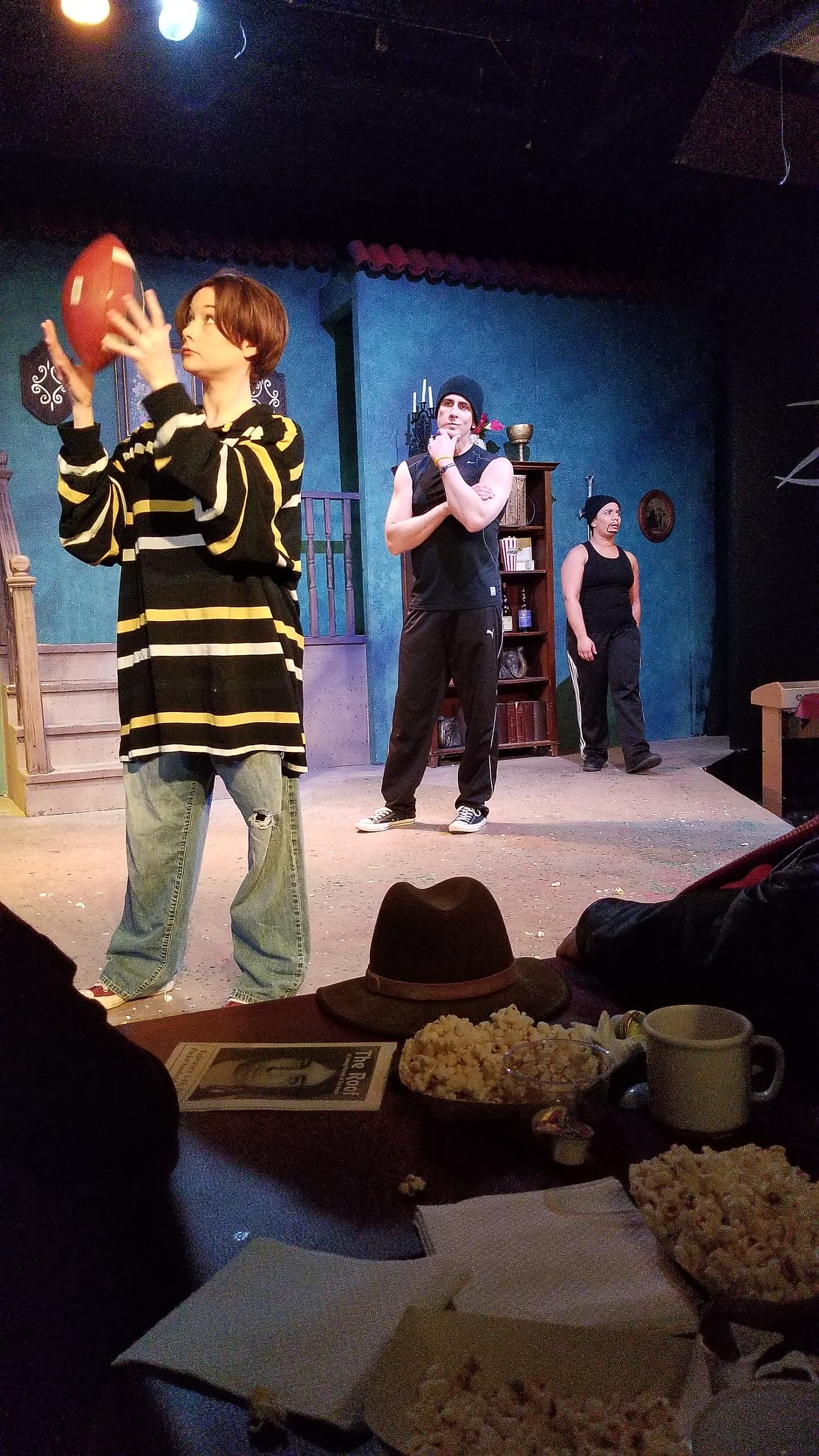 Last year, the cast of Pocket Sandwich Theatre's comedy The Roof — which parodies actor, writer and director Tommy Wiseau's unintentional comedic drama The Room — reached out to their characters' Room counterparts before the premiere of their play. Except, of course, for Wiseau because, well, he's Tommy Wiseau.

Actor Dan Janjigian, who plays the violent drug dealer Chris R. in Wiseau's masterpiece of mediocrity, responded and arranged to meet the cast during a business trip to Dallas for his insurance brokerage but wasn't able to see the show. This year, he more than made up for it.

The cast and crew didn't just make arrangements for Janjigian to make an appearance at their performance of The Roof last Friday at the East Mockingbird Drive theater. They also gave Janjigian the chance to don his skull cap and jogging uniform for a hilarious, surprise cameo as his character from The Room for a sold-out crowd of screaming fans last Friday.

"I said, 'Sure, I've been laughing at myself for 17 years,'" Janjigian says from his home in Austin about being asked to appear in The Roof as Chris R. again. "This is literally the first time I've reprised that role."

The late-night show opened its second run on Feb. 1, and ends with two more shows this Friday and Saturday. It premiered in 2018 to a massive audience response and became the theater's most popular late-night experience. Actress Melissa Torres, who plays Chris R.'s counterpart and several other roles in The Roof, says she contacted Janjigian during the release of the James Franco film The Disaster Artist about the infamous making of Wiseau's disaster-piece.

"We established a connection last year and he met up with us to hang out sometime last year and we wanted to reach out to him again and he was finally able to make it," Torres says. " ... We didn't tell anyone that he was going to make a cameo but when he did, people went crazy."


Janjigian walked out when Torres is supposed to confront Danny, played by Rhonda Durant, about the money he owes him. He walked out to a roaring crowd of fans in his character's intimidating wardrobe, complete with a sleeveless workout shirt, jogging pants and a dark winter cap. Torres walked out behind him dressed in identical clothes and a painted-on mustache, confused as to what his twin from an alternate dimension is doing here. The two stare each other down until Torres puffs her chest and steps to Janjigian, who flinches and flees the stage to thunderous cheers and applause.

Producer and actress Jeny Siddall, who plays Melanie, the counterpart to The Room's Michelle, describes the experience of having an actual star from the movie they are parodying as "surreal."

"I was a little nervous approaching him to even come see the show, let alone do a cameo," Siddall says. "We never thought this was something that could happen, but he was so nice and down-to-earth and willing to go along with whatever we threw at him."

Janjigian says he was more than willing to do a cameo and make an appearance at the theater for the film that "caught fire in an amazing way."

"I laugh that people get so much satisfaction out of the movie and love it," Janjigian says. "I had some people come up who were so nervous and it's funny. It's a really cool feeling to be a part of something like that and be in those situations and that people are into it."

Janjigian says the fandom of The Room is fueled by its insane success and the joy it brings to people, especially because it wasn't intended to be such a raucous comedy.

"Here's this thing that wasn't meant to make you laugh, and it's constantly something people can enjoy and laugh at," Janjigian says. "I've gotta give Tommy credit. He just went with it. He could have pulled the movie from the theaters, but he just said it's going to be what it's supposed to be and I'm going to laugh with you."

Janjigian fit in well with the cast and crew during his visit to the theater. He even stayed late to give everyone in the audience a chance to meet him and sign an autograph or two after the run.

"He's so nice and humble and he's just this normal guy who leads a normal life like the rest of us," Torres says. "He has a day job, but he's also involved in this thing that happened several years ago that gives him a little bit of fame, and he totally embraces it. He's a big supporter of our show and was so easy to work with."

Siddall says Janjigian's blessing and support of The Roof add an extra layer of acclaim to a show that already has a massive following in Dallas based on a film with a global cult following.

"It's reassuring that we did something right," Siddall says. "I was worried what his reaction would be since we were essentially parodying him and his cast mates, but he saw the humor in everything. I think it shows that we did it in a loving manner, and our parody was never intended to be malicious."
KEEP THE DALLAS OBSERVER FREE... Since we started the Dallas Observer, it has been defined as the free, independent voice of Dallas, and we'd like to keep it that way. With local media under siege, it's more important than ever for us to rally support behind funding our local journalism. You can help by participating in our "I Support" program, allowing us to keep offering readers access to our incisive coverage of local news, food and culture with no paywalls.
Make a one-time donation today for as little as $1.