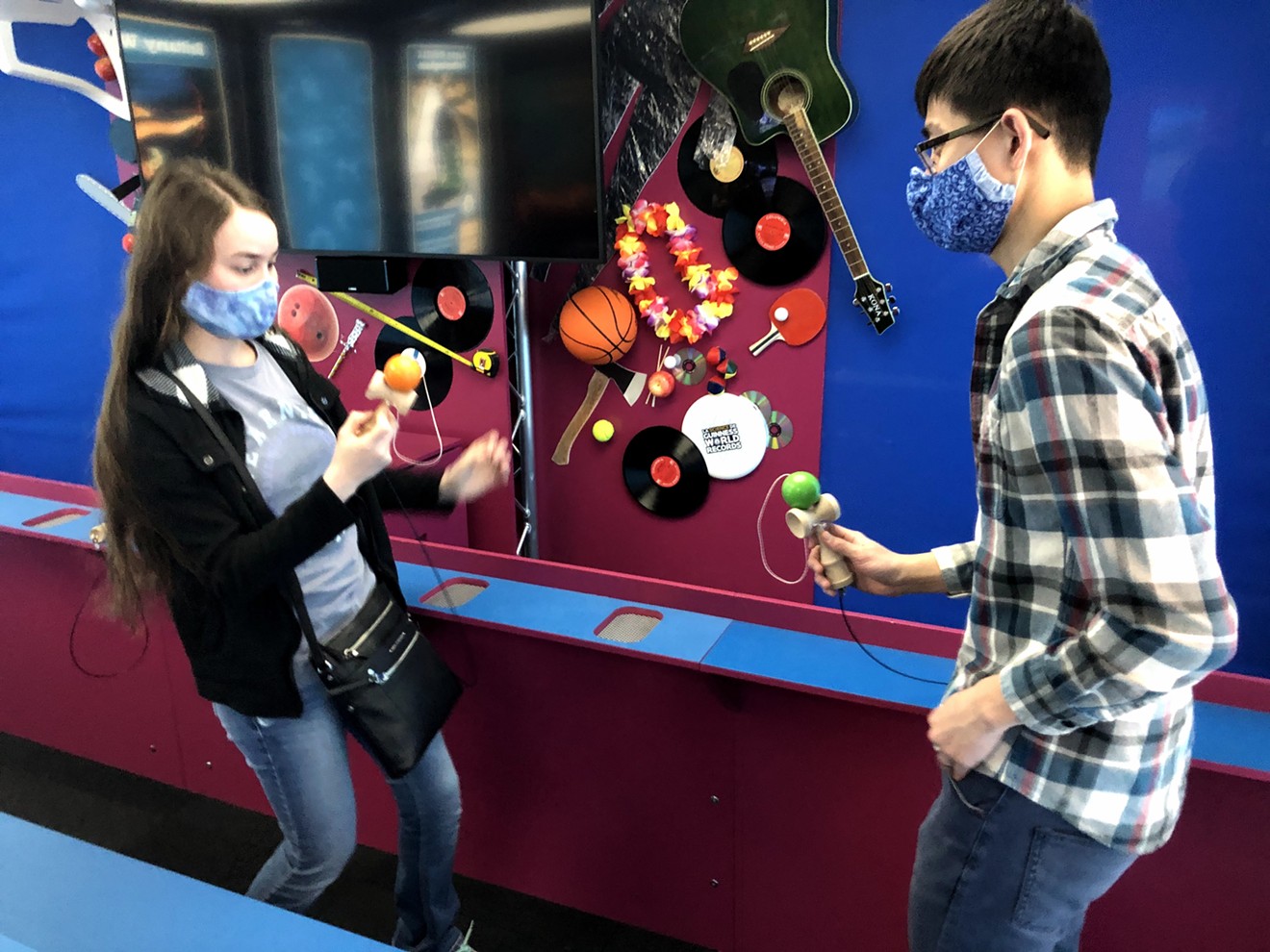 Lara and Jay Park of Waco attempt to master the Japanese juggling toy kendama in an interactive video exhibition explaining the physics and strategies of mastering the toy, hosted by U.S. kendama world record holder Andrew Jin. Danny Gallagher
Getting your name into the Guinness Book of World Records takes patience, dedication and practice. It also doesn't hurt if you know some of the science behind what it takes to get there.

The Science of Guinness World Records, an exhibition that opened in early March at the Perot Museum of Nature and Science,  shows off some of the amazing feats, artifacts and collectibles that achieved world records and teaches guests how to set records of their own. The exhibition will run at the Perot Museum until Sept. 6.

"At Guinness World Records, we believe everybody in the world is amazing at something," says John Corcoran, the director of traveling shows for Ripley Entertainment, which launched its traveling, national Guinness exhibition at the Perot. "Let's find what you're amazing at and make it official."

The interactive exhibition starts with a registration area where guests can create a virtual profile and avatar that will keep track of all of their record attempts. Guests use their fingerprints as they attempt world records that test their mental acuity, physical dexterity and reactive ability.

The exhibition also explains the biology, psychology and physics that helped world record achievers get on the pages of the world records books, such as Tazio Gavioli of Modena, Italy, who did 36 pull-ups using just a pinky finger in 2018 and Siddarth Nagarajan of Chennai, India who banged out the most drumbeats at 2,109 in 60 seconds in 2017, according to Guinness' official records.
click to enlarge Jack Spencer of Kansas City attempted to break the world record for the most punches delivered in one minute at the Perot Museum of Nature and Science's newest exhibition The Science of Guinness Records.
Danny Gallagher

The traveling show also brought 50 record-setting artifacts that explore different scientific focuses; they include the world's smallest chess set (which stands on a 9-by-9-millimeter board) and the world's smallest stop motion film, a piece of celluloid made with carbon monoxide molecules viewed through a scanning tunnel microscope.

There are less strenuous and expensive ways for guests to make a world record attempt. Different areas of the attraction cover the "Science of Focus," the "Science of Endurance" and the "Science of Reaction" and offer interactive touchscreen tests of their visual reflexes and memory with image recall and button reaction games. All of the outcomes are tracked and recorded on guests' virtual profiles, which can be viewed on leaderboards at the end of the exhibition.

Nearly all games and tests are hands-on in some way and museum staff takes extra care to make sure the space is sanitary and safe. Staff members are required to sanitize the hands-on exhibits every two hours and guests ages 3 and older are required to wear face masks.

“It’s a unique opportunity to immerse yourself in not only the science but the fun, grit and tenacity that goes into breaking a Guinness World Records title,” said Dr. Linda Silver, the Eugene McDermott chief executive officer of the Perot Museum. “Guests can learn about how their bodies react, focus and endure and how that knowledge can help them to become a record holder, too. Visitors can even try their own hand at record-breaking through a variety of interactive challenges within a giant arcade.”
KEEP THE DALLAS OBSERVER FREE... Since we started the Dallas Observer, it has been defined as the free, independent voice of Dallas, and we'd like to keep it that way. With local media under siege, it's more important than ever for us to rally support behind funding our local journalism. You can help by participating in our "I Support" program, allowing us to keep offering readers access to our incisive coverage of local news, food and culture with no paywalls.
Make a one-time donation today for as little as $1.