The House of Eternal Return in Santa Fe, New Mexico, the first exhibit created by the art collective Meow Wolf, has more than 70 secret rooms that take guests through a maze of metaphysical creations. Kate Russell
Can you remember the last time you went to a mall? Thanks to sites like Amazon and apps like Uber Eats, going to the mall these days feels like a visit to a Smithsonian museum of commerce re-creating the way people used to shop.

The Grapevine Mills mall owned by Simon Property Group is fighting the ravages of age and an evolving economic system by hosting two popular interactive stores and exhibitions that will roll out over the course of the next 12 months or so.

First, the official Stranger Things Store experience based on the popular Netflix sci-fi drama announced it will open a branch of its walkthrough experience through the town of Hawkins and the Upside Down. Then, the New Mexico-based art collective Meow Wolf announced that a new surreal exhibition space is planned for the Grapevine mall, set to open sometime in 2023.

Guests will be transported back to the 1980s when they can visit places like Hawkins Middle and High School during the annual Snow Ball dance, the famous alphabet wall in the Byers family living room and even the Upside Down where they'll come to face to flowering face with a Demogorgon.

Even though this is technically a store, it's bound to attract a huge crowd, so reservations will be the best way of ensuring a spot for a visit. An opening date hasn't been set yet, but a Feverup page has been set up so people can reserve their spot for the store and "skip the line" when it opens.
click to enlarge A guest of the Stranger Things Store in Los Angeles meets a Demogorgon.
Courtesy of Stranger Things Store
Then earlier this week, Meow Wolf announced it would build its fourth walkthrough art exhibition in the Grapevine Mills mall. It's set to open next year, according to the company's website.

Meow Wolf is a colorful, interactive artistic experience that encourages guests to walk through, touch and interact with original psych art pieces and scenes that all weave through each other to create a cohesive story and theme. The New Mexico art company opened its first space in SantA Fe in 2016 with The House of Eternal Return, a giant maze of 70 detailed rooms with secret passageways and displays that seem to defy the laws of physics. Guests encounter a giant, Victorian-style house that branches off into a number of different worlds through seemingly impossible ways, some of which return them to the very spot in which they started.

Meow Wolf opened two new permanent installations with the Omega Mart in Las Vegas and Convergence Station in Denver in 2021. The Omega Mart's façade appears as a typical, big box grocery store but the mask is slowly wiped away the closer and deeper guests get into the space. The Convergence Station is even more random as a series of separate dimensions seems to merge into one space.

There aren't any clues as to what might Meow Wolf might be planning for its Grapevine Mills installation, but the setting itself may be one. A new teaser website called Texas Portals popped up on the Internet featuring a cowboy boot that guests are encourage to "wake up" by clicking on it. The image only reveals a map of the state that produces a series of colorful stickers with every click. 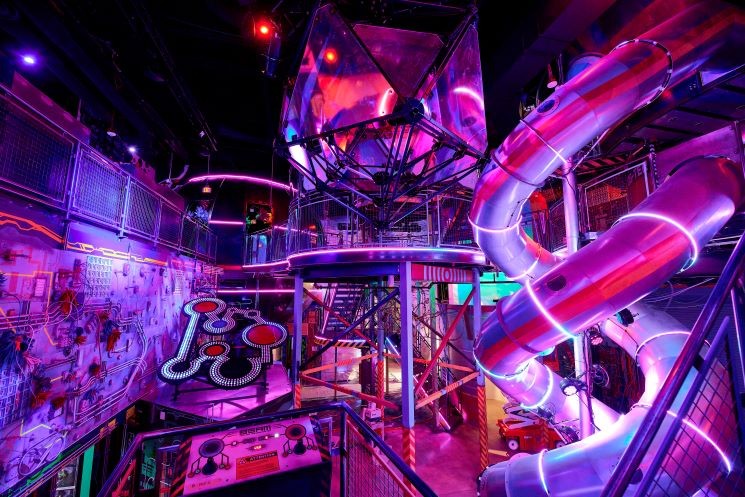 The Meow Wolf experience Omega Mart in Las Vegas takes guests to strange places like the Dramcorp Factory where the unusual supermarket gets its supply of quantum produced products.
Kate Russell
KEEP THE DALLAS OBSERVER FREE... Since we started the Dallas Observer, it has been defined as the free, independent voice of Dallas, and we'd like to keep it that way. With local media under siege, it's more important than ever for us to rally support behind funding our local journalism. You can help by participating in our "I Support" program, allowing us to keep offering readers access to our incisive coverage of local news, food and culture with no paywalls.
Make a one-time donation today for as little as $1.