The comedian Tape Face will perform at the House of Blues on Friday. courtesy Gag Reflex Management 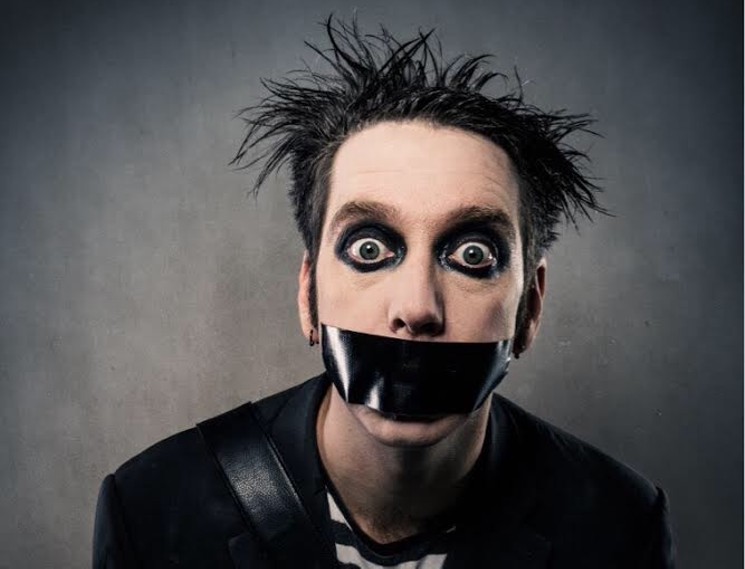 The comedian Tape Face will perform at the House of Blues on Friday.
courtesy Gag Reflex Management
It's difficult to describe a comedy act like Tape Face, but comedian Sam Wills, the real name of the man behind the strip of electrical tape, says that going into one of his shows cold enhances the bewilderment and surprise he wants his audience to feel.

"The less you know, the more you'll enjoy it," Wills says.

When Wills musses up his hair, slaps on a liberal amount of black eye-liner and puts a piece of tape across his mouth, he transforms the stage into a giant play space for adults where his childish mind transforms ordinary objects into wild pieces of artistic comedy and hilarious toys and games.

A pair of oven gloves turns into a singing duet. Some balloons and staple guns become the setting for a Wild West showdown between two rival gunslingers. A couple of hobby horses, some toilet paper, a plunger and a toilet seat transform into a white-knuckle horse race.

"It's just genuinely playing," Wills says. "I look at something and say, 'Can it be a face? Can it dance?' It's just taking those ideas and seeing if I can make it funny."

The man known as Tape Face, who found an audience in America as one of the finalists on NBC's America's Got Talent, is touring the states with his delightfully bizarre standup act and stopping Friday at the House of Blues in Dallas.

The Christchurch, New Zealand, native came to his silent standup comedy art from the circus world. He studied circus arts at a circus school in his hometown, where he majored in juggling and minored in acrobatics and mime. Wills started his act as a street performer, doing stunts — like contorting his entire body through the frame of a tennis racket and blowing up rubber gloves wrapped around his head — for crowds and festivals and busking for tips with a loud, punk, Jackass-esque edge. Being a street performer requires wit and jokes, so he also worked at stand-up.

"I still like to think of myself as a street performer," Wills says. "It's very much a hybrid of things, and with the Tape Face show, it was never meant to be taken seriously. It was only meant to be a five-minute show."

Wills' street performances earned him some awards and wide acclaim, but he kept trying to challenge himself to bolder ideas. One night, he did a set without speaking. The results were "very crude and a silly, basic kind of humor," he says.

"Another comedian came up to me and said, 'The only way you can do a silent character is if you gaffer-tape your mouth shut,'" Wills says.


"I still like to think of myself as a street performer. It's very much a hybrid of things and with the Tape Face show, it was never meant to be taken seriously. It was only meant to be a five-minute show." – Sam Wills

The next night, The Boy With Tape on His Face was born, a name Willis created with inspiration from Tim Burton's children's poem The Boy With Nails in His Eyes. The character became a hit at comedy clubs and festivals throughout the United Kingdom and in different parts of the globe.

"I originally called him The Boy With Tape on His Face, but I found it got lost in translation in places like South Korea, and I was thinking about rebranding [to Tape Face] when I got to America's Got Talent," Wills says. "I had a conversation with another friend about making the show bigger and better, and we remembered that scene in The Social Network where he's like, 'Just drop the The because Facebook sounds cleaner."


At first, the character did short bits involving prop, games and stunts, often with members of the audience. Tape Face is known for pulling people up onstage to dance to tunes like the Jackson 5's "Blame It on the Boogie." Other times, he dresses audience members in clothes to be removed as some sultry strip-tease music starts playing while he goes offstage.

"It keeps the show fresh for me," Wills says. "I just like to write a joke where there is no wrong. People can do anything, and my job as a comedian is to teach them the basic task because I want them to succeed and leave the stage as a hero."

Wills has expanded the character, giving the show a story for the audience to follow rather than just a string of standalone bits and ideas. The games and tricks include longer bits and bolder ideas that feel more like a stand-up show even if you can't hear the jokes, Wills says.

"I challenged myself to write bigger and longer jokes," he says. "There's a narrative you can follow along, and because I come from a standup comedy background, I'm using the same structures of a standup comedy show. So there's a rhythm there, but you just won't be able to hear the words to it."