Can You Defeat the Lewisville Labyrinth, a Bigger, Bolder Take on the Escape Room? 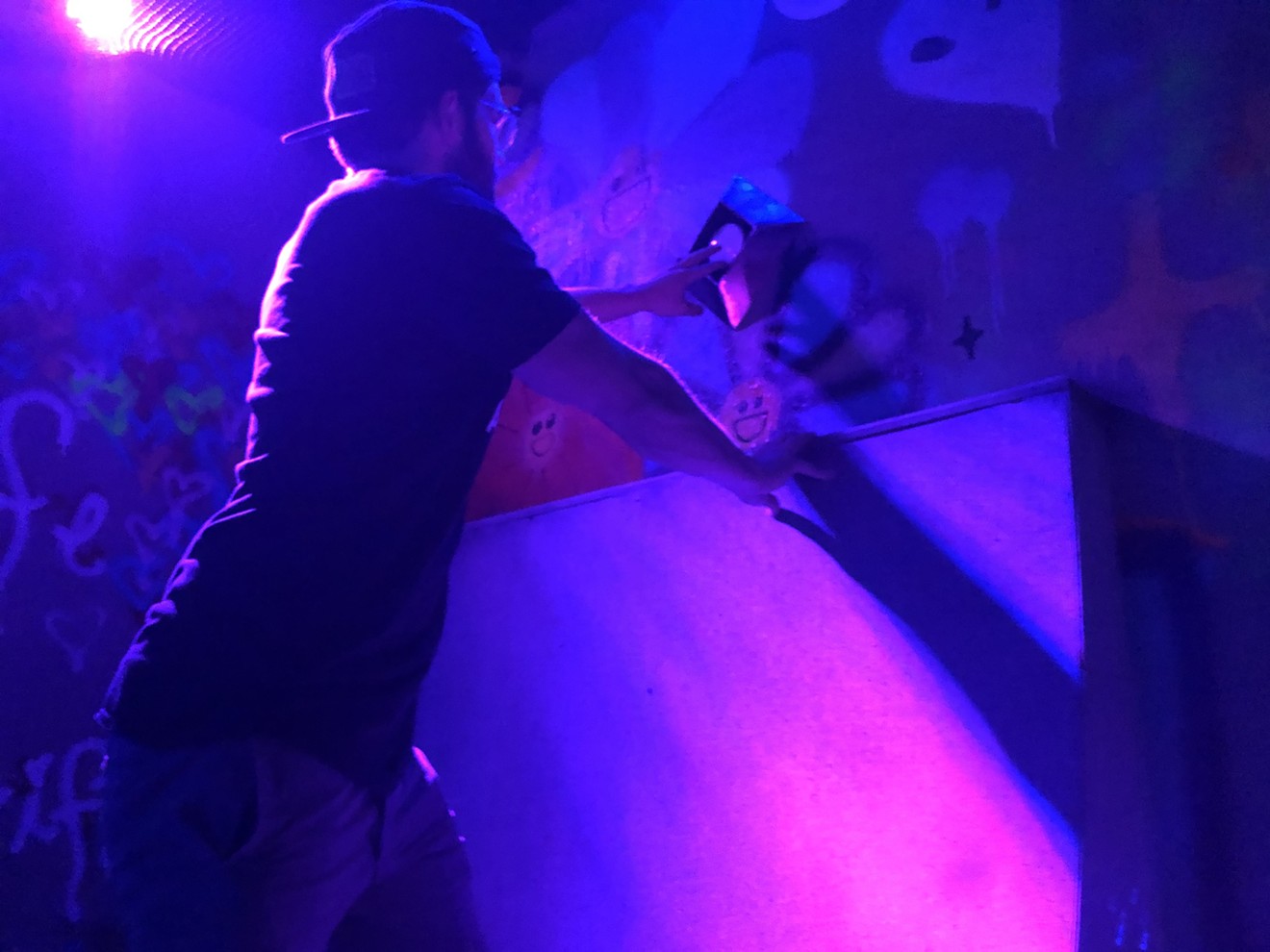 Lewisville Labyrinth owner Raleigh Williams tests one of the interactive sensors in the Ninja Room, one of 42 challenges in his new immersive entertainment experience. Danny Gallagher
Have you ever watched a movie like The Maze Runner or Labyrinth and thought — or even said out loud — that you could beat those challenges if you were in the protagonist's shoes? Now there's a way to prove it, and you don't have to risk getting compressed in a giant puzzle built by a faceless health organization or rescue your baby brother, whom you don't realize how much you love until David Bowie kidnaps him.

The Lewisville Labyrinth looks like another evolutionary step in interactive environment entertainment. It combines elements of escape rooms, obstacle courses and video games and turns them into an 18,000-square-foot adventure for the brainy, the brawny and those who are both. The space opened Saturday after two years of design and construction.

"We started with trampoline parks, and we started doing escape rooms when they got big in 2016 so we started Alcatraz Escape Games and saw some of the frustrations that customers had with escape rooms," says Lewisville Labyrinth owner Raleigh Williams, who also owns and operates the adjoining Golden Axe Throwing and Airborne Trampoline Park in the same building. "The Labyrinth was kind of born as a combo of combining fun ninja element courses of Airborne with a lot of the escape room things and adding a little bit of technology so customers can guide their own experience."

Writer Danny Gallagher attempts to cross (and fails spectacularly) the lava pit on a tightrope at the Lewisville Labyrinth.
Raleigh Williams
The Labyrinth has 42 rooms with different mini games containing puzzles that challenge players' lateral thinking skills or obstacles that challenge their physical dexterity. Some of the more difficult rooms usually offer a combination of both. The games are sectioned off into 16 immersive and familiar themes that meld well with their challenges, like the colorful "Donut" rooms and the dark and foreboding "Nightmare" rooms. Challengers have to score a certain number of baskets in a sports themed room, traverse lava-covered landscape in the volcano rooms and score loot without tripping the burglar alarm in the heist rooms.

The rooms are also labeled by difficulty and challenge type, so teams can plot ahead and send their smartest or strongest first into each area.

"It's basically a series of mini games that people progress through, and they're collecting puzzle pieces to play the final labyrinth room, the final level," Williams says. "Think of it as a video game in real life or a human-powered arcade where you're going through all these levels, and if you fail them, you can try them over from the beginning."

Players can track and log their progress on electronic tracking cards that tally points that can be redeemed for prizes and also keep tabs on the rooms and challenges they've completed. New rooms and challenges are unlocked as players complete previous ones, leading up to a final showdown with an artificial intelligence system that thinks it can outwit the whole of humanity. Williams says it takes about 30 hours to beat the entire labyrinth.


"Think of it as a video game in real life or a human-powered arcade where you're going through all these levels, and if you fail them, you can try them over from the beginning." — Raleigh Williams

The rooms are designed to be challenging but quick, so if a team fails a certain challenge, they can walk to another part of the labyrinth to take on another challenge and come back later to learn from the mistakes they made in their earlier runs. The rooms also don't trap players inside them like rats in some sadistic puzzle maker's plaything if they can't figure out the solution or complete the challenges. Each room runs on its own computer system that can tell teams when they've passed and failed with brisk immediacy.

"In these rooms, you get immediate feedback on whether you're doing something right or wrong," Williams says. "So we try to build these rooms that allow people to solve the problems in a different way. In a normal escape room which I also own, you're not really sure whether you're on the right track or not and don't get immediate feedback on the way you're playing the room. With this, if you do something wrong, you'll fail that room immediately and you can get out and try it again doing something different."

Lewisville Labyrinth owner Raleigh Williams shows how players scan their tracking card before they set off into the labyrinth.
Danny Gallagher
KEEP THE DALLAS OBSERVER FREE... Since we started the Dallas Observer, it has been defined as the free, independent voice of Dallas, and we'd like to keep it that way. With local media under siege, it's more important than ever for us to rally support behind funding our local journalism. You can help by participating in our "I Support" program, allowing us to keep offering readers access to our incisive coverage of local news, food and culture with no paywalls.
Make a one-time donation today for as little as $1.