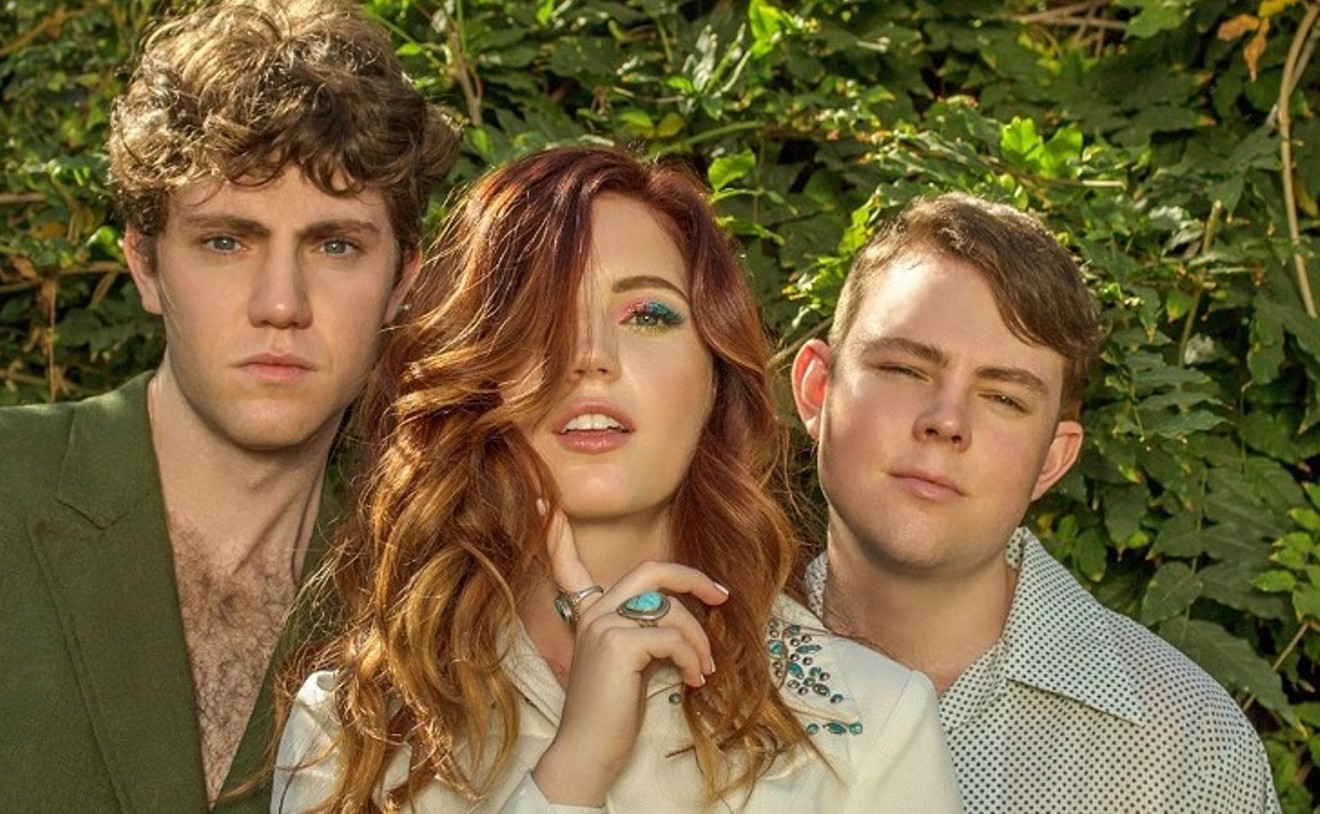 Echosmith — lead singer Sydney Sierota (middle) flanked by her brothers Noah (left) and Graham — will perform at the Granada Theater in Dallas on Feb. 23. Ariana Velzaquez
Echosmith, a Los Angeles-based indie pop-rock trio of siblings led by the endlessly charming singer-songwriter Sydney Sierota, have kept music-making all in the family since their inception.

That creation was not simply a marketing ploy or business decision, either. With her band of brothers Noah (vocals, bass) and Graham (drums), Sierota is the tie that binds this close group — one that believes in the axiom: "The family that plays together, stays together."

Days before the Jan. 10 release of Lonely Generation, Echosmith’s long-awaited full-length follow-up to Talking Dreams, their 2013 debut album that turned to gold, Sierota was preparing for a chaotic 2020 that includes a U.S. tour with a stop in Dallas ( at Granada Theater) on Feb. 23. They’ve already performed nationally on Live with Kelly and Ryan and filmed an appearance for a future episode of Live from the Artists Den.

From her home in Los Angeles, Sierota sounded relaxed and content during a phone interview with the Observer while contemplating what else the New Year will bring.

It might be a challenge to try to outdo herself after a bountiful 2019 that involved writing songs and recording in their home studio, making videos for the album and skiing in Japan before Christmas with her soulmate Cameron Quiseng months after they became husband and wife on March 30. But the effervescent performer, who turns 23 on April 21, seems to take it all in stride.

“2019 was one of my favorite years,” Sierota offers. “It was definitely a crazy one that had so much going on, and I got to learn so much that year and have so much fun at the same time. So it is hard to imagine topping last year, but now that the album is out this year, that’s a really big milestone for us that we’ve been waiting for a really long time. … I’m really excited to see how this year unfolds and how people respond to everything. We just put it all out there."

The collective “we” includes her brothers, father Jeffery David, their band manager and Lonely Generation producer who handled production chores on Echosmith’s Inside a Dream and Acoustic Dreams EPs, and mother Linda Sierota, the group’s tour manager. An elated Sydney believes that’s “essentially the ultimate mom’s job” while experiencing “a family vibe” whenever they hit the road.

“If you think about it, that’s what a mom does,” Sierota contends. “She gets everyone in line and gets them to do what they need to do and keeps them all tied together. So it’s actually like the perfect role for her. She’s the perfect mom, so she’s the perfect tour manager, and everyone on tour usually ends up calling her 'Mom,' too."

For the most part, this musical contingent has worked together since Echosmith was born in 2009 and included oldest sibling Jamie, who left the band in 2016 to focus on his own role as family man. The group eventually became a pop mainstay, delivering hit singles “Cool Kids” and “Bright” from Talking Dreams after signing with Warner Bros. Records.

“We grew up in the studio because [Dad] was always a songwriter and producer for other artists,” Sierota recalls, adding that she and her brothers were recording songs for David before they were teenagers. “Even at 2 years old, we were making Christmas songs for our grandparents in the studio as a gift for them.”

Doing it again as mature, seasoned professionals for Lonely Generation, the band’s first independent release on their own Echosmith Music label, “kind of took us back and was nostalgic in a way,” Sierota says, though the record and title track reflect the struggle to maintain human connections in the numbing age of social media. Their new message might as well be: “Don’t be Cruel Kids."

“It just felt so natural to do this album that felt so personal and is so personal, to do it with family. And to just have that camaraderie there,” Sierota adds. “We can be so honest with each other and say, ‘Hold on, I hate that keyboard. Can we just move on from that?’ And we have to, of course, still say it nice to each other, but it’s nice to have the honesty because other people who you’re not related to, you have to walk on eggshells and kind of hint that you might not like something.”

“It just felt so natural to do this album that felt so personal and is so personal, to do it with family." — Sydney Sierota


Sierota laughs about getting texts from her father at 2 or 3 in the morning (“when all of us went to bed hours ago”) with ideas for improving a song. Revamping music and lyrics on the spot became part of the creative process in the studio (the garage of their family home) for Lonely Generation. Some tunes got a virtual renovation while others were constructed from the ground up at the last minute.

The title cut was one of those sudden add-ons “that just came together so quickly and kind of shaped a lot of what the entire album felt like and the theme of the entire album,” Sierota says, realizing the potential to transform from unbridled youth to levelheaded adults writing vulnerable, deeper lyrics isn’t a bad thing. “And it feels like it kind of ties everything together with a nice little bow because it has just so many things in that one song.”

While collaborating within the family and seeking outside contributions had become Echosmith’s steady practice, Sierota took an intimate, individual approach to “Follow You,” another late addition.

The song was written for her husband, and it played during their first dance as bride and groom after their outdoors wedding in Escondido, California.

“It turned out to be such a special moment for everyone at the wedding; after we finished dancing it seemed like there wasn’t a dry eye in the room!” Sierota shared with InsideWeddings.com.

Quiseng, the former Allstar Weekend bassist, met his future wife when both bands were part of the 2013 Warped Tour, but they didn’t become a serious couple for a while. He popped the question in Kyoto, Japan, on Dec. 1, 2018, and Sierota posted a picture on Instagram with the caption, “OF COURSE I SAID YES.”

Though he won’t travel on the Lonely Generation tour bus this winter, Sierota says Quiseng, who has co-starring roles in recent Echosmith videos such as “Shut Up and Kiss Me” (as a lovable goofball) and “Lonely Generation,” will visit occasionally.

Her older brother Noah, who married Caraline Dirks in May 2017, expects his wife to do the same.


With new tunes prominently featured on the set list alongside solid platinum hits, Echosmith will present many of the wholesome, uplifting and, yes, romantic qualities of their Inside a Dream Tour. They’ll also bring back guitarist Jacob Evergreen, who played shows throughout 2018.

Sierota is an impressive, expressive entertainer who wants to spread joy. It shows in her magnetic stage presence, lovely voice and the group’s lively, danceable songs that pump up the audience awaiting constant confetti cannon bursts that rival many postgame celebrations.

“We really want to take our fans on a journey emotionally because we have so many different kinds of songs on the album that are, like I said, so personal and so real to us,” she says. “And, of course, we always love to have so much fun. And most of the show is gonna be pretty high energy. … We love confetti and we love drum solos and things like that.” 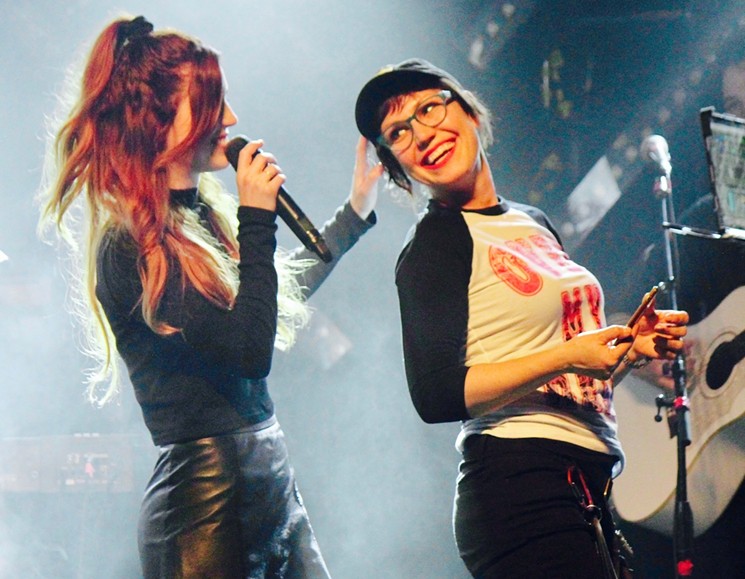 Echosmith’s Sydney Sierota chats with her mother Linda, who’s also the family-friendly band’s tour manager, after introducing her to the crowd during a show at the Denver-area Gothic Theatre in 2018.
Michael Bialas
Taking selfies with crowd members — and even beaming mom Linda while she “models” tour garb onstage — proves that this family means business while they enjoy themselves.

“But we also want to have some purposeful intimate moments with our fans, too, where maybe it’s just me and a guitar,” says Sierota, who also plays keyboards. “And it just feels like me and you sitting in a room hanging out together.”

When the tour winds up March 5 at her favorite U.S. stop — Los Angeles — Sierota will naturally feel right at home again.

With family members living “10 to 15 minutes away from each other,” Sierota jokes that “we like to be semi-close to each other most of the time,” while embracing the tight-knit qualities of a group that’s seemingly drama-free.

“We grew up here and have lived in LA for our entire lives, so it’s hard to think of living anywhere else, but you never know what the future holds,” Sierota says, still leaving that door ajar. “But I think I’m pretty set on at least Southern California because it’s kind of unbeatable with how beautiful those sunsets are.”

They might look even prettier in 2020, the year when Sierota and Echosmith could really rise and shine.
KEEP THE DALLAS OBSERVER FREE... Since we started the Dallas Observer, it has been defined as the free, independent voice of Dallas, and we'd like to keep it that way. With local media under siege, it's more important than ever for us to rally support behind funding our local journalism. You can help by participating in our "I Support" program, allowing us to keep offering readers access to our incisive coverage of local news, food and culture with no paywalls.
Make a one-time donation today for as little as $1.