Kraftwerk Blew Our Minds on Tuesday Night in Dallas, Even Though We Knew They Would 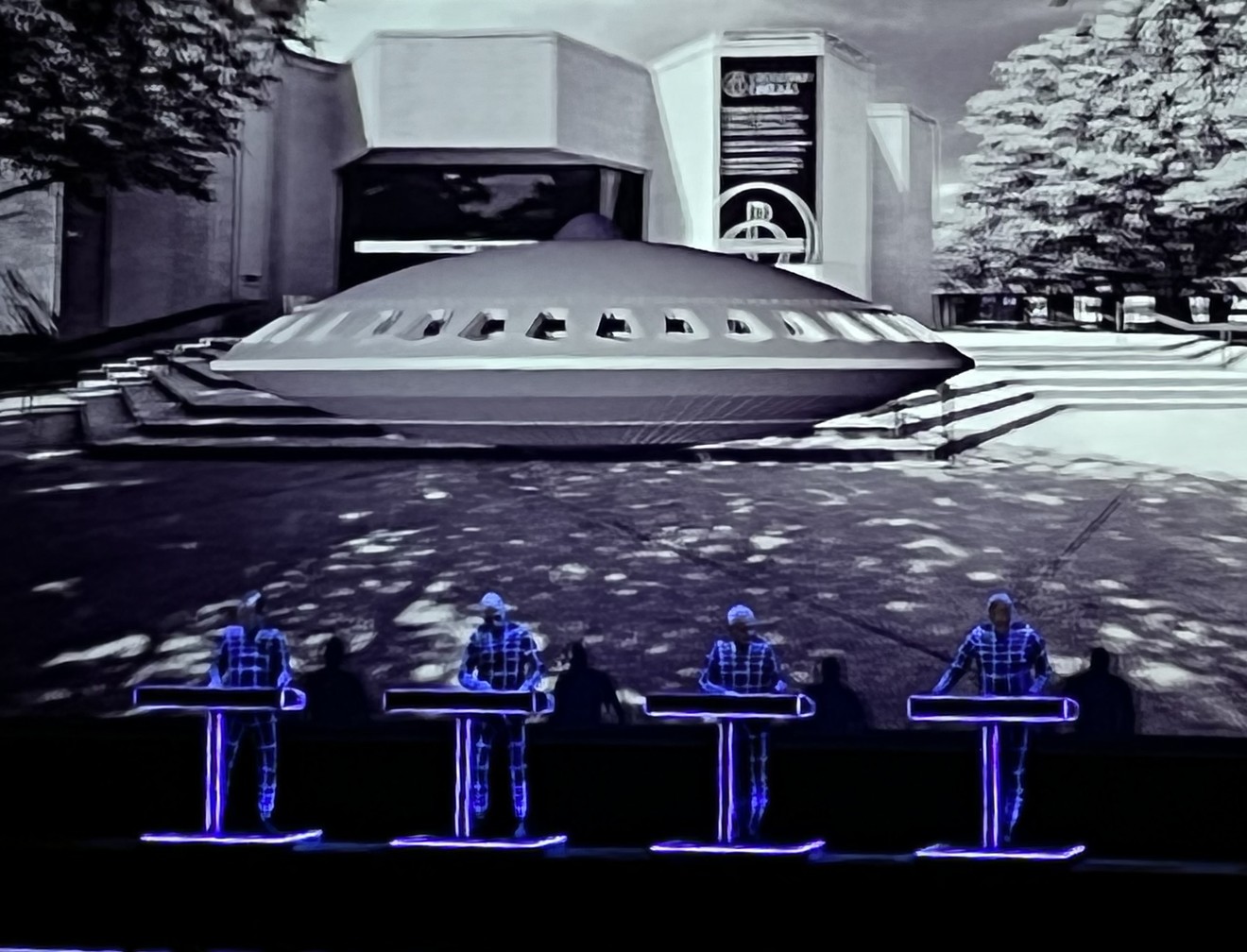 Kraftwerk has offered German innovation to the world for over 50 years. Elvis Anderson
It's hard to declare victors in art, but a Tuesday night concert at Fair Park was another win for Kraftwerk, the champion artists from Germany’s artistic epicenter of Düsseldorf.

Germany’s seventh largest city is home to the Kunstakademie Düsseldorf (Düsseldorf Arts Academy), which has produced some of the country’s most celebrated artists, a group that attracted people such as Ralf Hütter, Kraftwerk’s founding member and front man.

No doubt, Kraftwerk is the clear standout among Düsseldorf's global artistic contributors. For more than 50 years, the band's innovative multimedia-based show has been a triumph in the music industry. The group is often celebrated as the inventors of electronic music, but their career is much greater — Kraftwerk combines music and the visual arts in a way the world has never seen.

Ratinger Hof, the club where Kraftwerk started in the late '60s, is now a restaurant. It’s a short walk from the Arts Academy and the four-piece band was inspired by the artistic hub. In 1974, professor and performance artist Joseph Beuys locked himself in a room with a coyote for eight hours over three days as performance art. With “Coyote” as the standard, an electronic music show with 3D glasses is not hard to fathom.

The group grew on par with the available technology, and as new instruments were invented throughout the '80s, the band’s sound evolved. They were the original early adopters of musical tech, which was a Credo for their approach to music. If new instruments were released, Hütter and Kraftwerk's other founding member Florian Schneider learned to play them. When others considered them weird, they leaped musically with speech and keyboard synthesizers and the granddaddy of them all, the Roland TR-808 drum machine.

Anyone unfamiliar with a Kraftwerk live show would soon catch up. There’s nothing like it in music. Before the show, one buzzing Kraftwerk fan tried to explain it in the breakroom to a co-worker who’s never heard of Kraftwerk.

“So, these four dudes come out in black jumpsuits with LED trim, and they post up behind podiums like they’re going to preach sermons," he said. "They stand behind the podiums for the entire show without really moving at all. This is when the audience puts on their 3D glasses on because the show’s about to start. And just when you think a political debate is about to happen, they start banging the greatest electro and breakbeats of all-time."

Kraftwerk fans have a good idea of what to expect when they file in for a show: enthralling visuals and a sea of fans following one beat. Tuesday night's show delivered what they came for. Most of the tracks on their playlist were quickly recognized and appreciated by the audience: “Numbers,” “Electronic Café” and “Autobahn” got cheers from the first few notes.

Their show was robotic and rigid, which is part of its charm — it started at 8 p.m. sharp and ended at 10:05 exactly. Their Dallas concert was no exception. Each member gave the audience a bow and exited stage left. Ralf Hütter was last; after he walked off stage the show was over.

On the way out of the theater a woman who was a newer fan said to her date, “I’ve never seen anything like that, but wow, that was amazing.”
KEEP THE DALLAS OBSERVER FREE... Since we started the Dallas Observer, it has been defined as the free, independent voice of Dallas, and we'd like to keep it that way. With local media under siege, it's more important than ever for us to rally support behind funding our local journalism. You can help by participating in our "I Support" program, allowing us to keep offering readers access to our incisive coverage of local news, food and culture with no paywalls.
Make a one-time donation today for as little as $1.