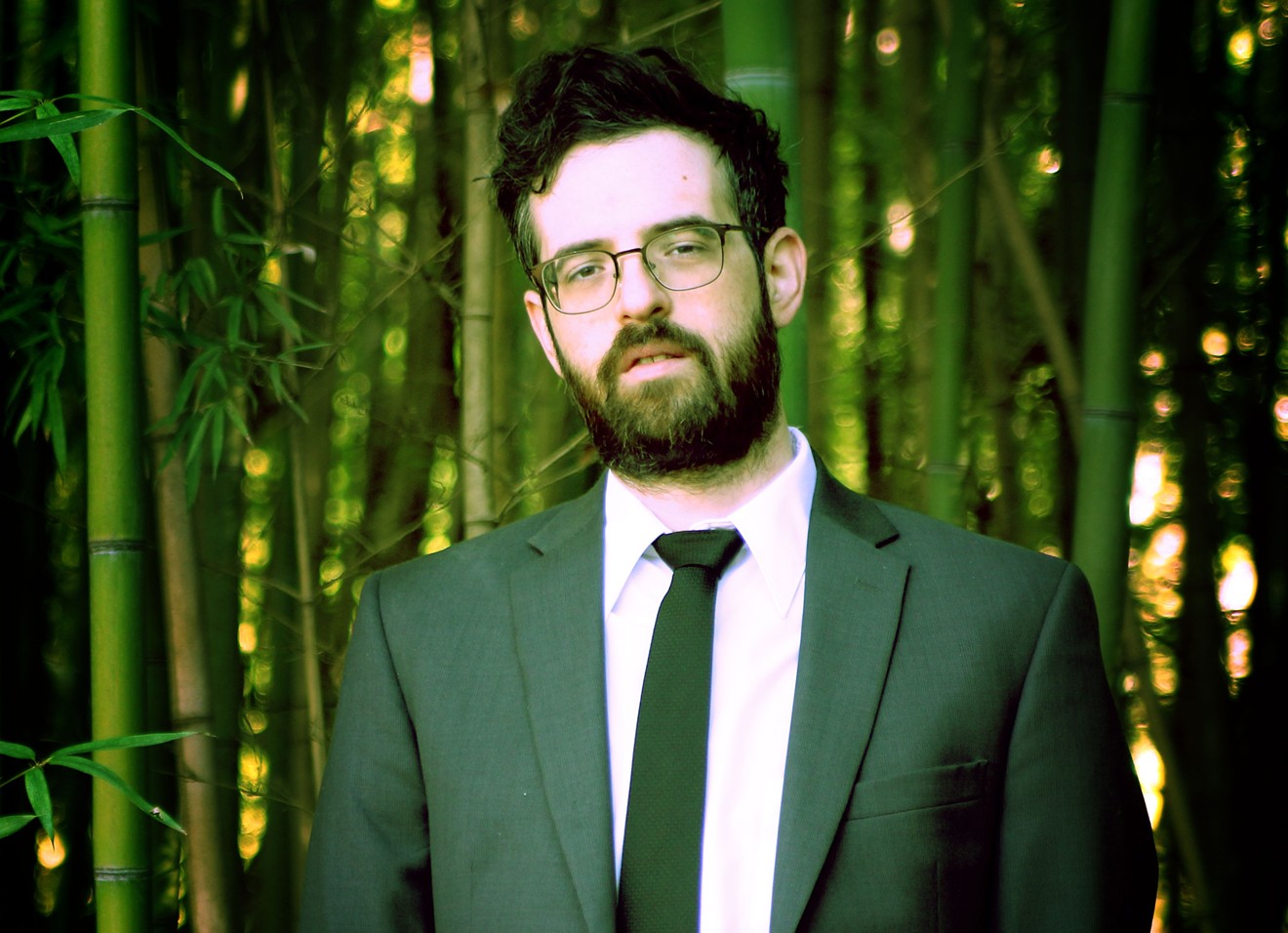 Denton musician Tony Ferraro wants music to have catchy melodies, especially his own. Aubrey Mortensen
Tony Ferraro never stops. The prolific Denton-based musician delivers art at a dizzying pace, with a self-set goal to release between one and three records a year — either solo or as a contributor. And not even two weeks into 2020, he’s already announced the latest record to land in his considerable catalog: Paj Mahal.

The album is credited to "TF and Friends." Ferraro didn’t set out to birth his magnum opus. Instead, he employed a more laid-back approach during the songwriting process.

“The music on this particular record is … very casual,” Ferraro says while dressed business casual himself in a suit jacket, tie and jeans. “It’s not like we got together to make some grand piece of art or anything.”

That sort of laissez-faire attitude permeates Paj Mahal, so titled because of the veritable “hodge-podge” of  sounds. Guitar solos are as relaxed as a cooked lasagna noodle — like if Pavement’s Stephen Malkmus popped a Xanny before taking the stage. Some songs hypnotize the listener into a reflexive toe-tapping trance before suddenly stopping on a dime.

The 10-song album drops Jan. 31 on Bandcamp and Feb. 2 on Spotify and iTunes. The recording process was as chill as they come, Ferraro says; he laid down the tracks sporadically over the course of a year.

Ferraro is featured throughout the 30-minute effort, but he gets by with a bit of help from his buds. Scott Danbom (Centro-matic, Slobberbone, Static Diary) and Ryan Thomas Becker (RTB2, Hares on the Mountain) contribute keys to some tracks. Danbom co-wrote the album’s opener. And Grady Don Sandlin (Raised Right Men, RTB2) hits the kit on a couple of choice tunes, too.

The guys had fun recording the album, Ferraro says, and that lighthearted approach bleeds into the songs.

“I like just making things for fun with friends, and I think that this record conveys that attitude,” he says. “To me, it’s super goofy and playful. Most of it’s just stuff you can turn on and tune out to.”

With a killer harmonic instinct, half of the songs feature Ferraro’s vocals; the other half don’t have lyrics at all. And although the record’s instrumental tracks feel effortless, Ferraro approached writing them with calculated precision. He has to, he says — otherwise the listener would get bored.

For him, songs without lyrics are harder to write than those with. But Ferraro’s always up for a challenge.

“If you have lyrics, it’s implied that [the song is] going to be interesting because it’s going to be about something,” he says. “Without, you have to kind of make it melodious enough to keep the listener’s attention, or chill enough that you can just chill the F out to it for two minutes.”


“I’ve been doing this a long time, so I can usually tell if a song sucks or not. If it’s not memorable enough to be memorized … then is it good enough at all?” — Tony Ferraro

Take “Crocodile,” for example. Released on New Year’s Eve, the single is a cinematic instrumental earworm. Becker skips on a retro-sounding synth as Ferraro glides on an electric bass throughout the 2½-minute song. Equal parts quirk and charm, “Crocodile” is the kind of track that would be right at home in a Wes Anderson movie starring Bill Murray or Gwyneth Paltrow.

Another standout, “Pinata,” is steeped in the same easygoing warmth as “Crocodile,” except this one features lyrics. The song reads as another whimsical sonic romp, but Ferraro says it was inspired by the untimely death of his cat, Toonces. Ferraro’s late pet got its name from a recurring '90s-era Saturday Night Live sketch. In it, a cat named Toonces (poorly) drives his owners’ car and causes chaos wherever he goes.

Still, even though his fallen feline served as inspiration for “Pinata,” Ferraro insists that it’s up to the listener to decide what the song is about.

“When I lie down for the evening / I wanna feel you holdin’ onto me / And fall into a dream,” Ferraro sings in an earnest, straightforward timbre. “When I walk around in moonlight / I wanna find you.”

Each track on the record is catchier than the common cold, and that’s by design. Ferraro says he only pursues melodies that stick, a songwriting tactic also implemented by ABBA’s Benny Andersson.

Ferraro says that half the time, he won’t sit down to write without a solid hook in mind. To him, it’s survival of the snappiest. After all, if the songwriter can’t remember the melody, then why should the listener be expected to?

“I’ve been doing this a long time, so I can usually tell if a song sucks or not,” Ferraro says. “If it’s not memorable enough to be memorized … then is it good enough at all?”

Ferraro, who doubles as a graphic designer, also created Paj Mahal’s album art. He rendered a simple drawing of Los Angeles’ Alta Loma Hotel, a building that pre-Beat novelist John Fante featured in his novel Ask the Dust. Ferraro also nicknamed his home studio “Alta Loma Hotel” as a nod to Fante, one of his early literary heroes.

Live music fans can catch Ferraro and friends at Dan’s Silverleaf on Friday, Feb. 28, for the album release show. Fort Worth’s Big Heaven is set to open, with a third band to be announced. Even though the show is over a month out, Ferraro says he’s already working on his next album. He hopes to release it sometime this summer.

“I’ve got to release stuff, I’ve got to put something out there,” he says. “Artist is life — that’s all there is. Everything else is boring.”
KEEP THE DALLAS OBSERVER FREE... Since we started the Dallas Observer, it has been defined as the free, independent voice of Dallas, and we'd like to keep it that way. With local media under siege, it's more important than ever for us to rally support behind funding our local journalism. You can help by participating in our "I Support" program, allowing us to keep offering readers access to our incisive coverage of local news, food and culture with no paywalls.
Make a one-time donation today for as little as $1.