In our hearts, we know every day is piña colada day. Swizzle
Saturday is National Piña Colada Day, and that got us a tad emotional considering we don't imbibe in these timeless frozen cocktails as often as we should. But instead of just running a list of best piña coladas, we wanted to find some great places to enjoy the drink. Truth be told, it's hard to find a bad piña colada anyway.

So, we're honing in on the best places to enjoy a piña colada this Saturday or any other day of the year.

When it comes to local tiki lounges, Susie Oszustowicz, who has written many words about drinks in this town, prefers Swizzle on Greenville Avenue. They opened just last year, but the old Polynesian soul of the space feels like it's been here longer than any of us. Their cocktail The Missionary's Downfall (with only one spear, meaning it's not too strong) is a blend of white Puerto Rican rum, lime, fresh pineapple, mint and a bit of peach brandy. Or go for the traditional piña colada as shown above. You'll be on island time in no time.

Writer E.Mayne is partial to this tropical den tucked away in Central Arlington (not far from the new Cane Rosso). This low-lit tiki lounge with mermaids afloat always has soothing hula music swaying overhead. Fruity drinks are served in unique tiki mugs, which are for sale. Fair warning: walking outside during daylight after an hour or so inside is a brutal assault on all your sense. It's best just to stay until the sun goes down. They don't serve a straight piña colada, but the Malekula has Tuaca, coconut and gold rums with brandy and fresh-squeezed juice. Or go for the Dole Whip, which is pineapple soft serve, then add a shot of coconut rum. 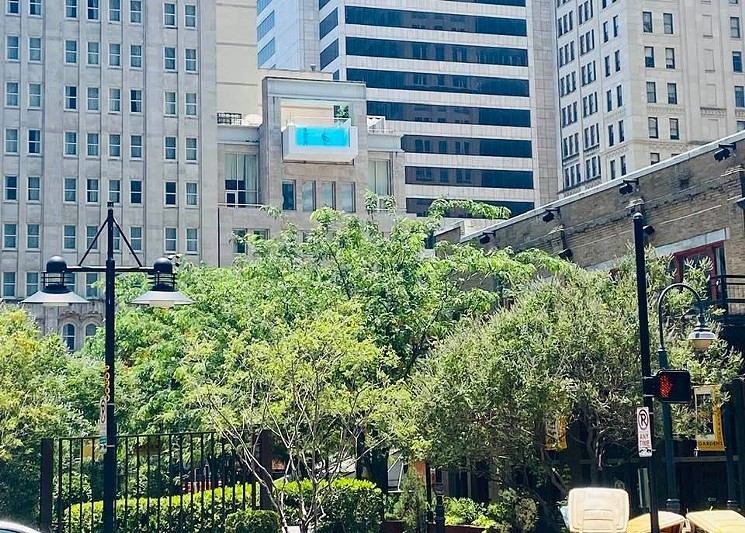 The Lorenzo Hotel is actually holding a National Pina Colada Day Sip-n-Swim party, but if you can't make that, purchase a day pass anytime for just $30. Their outdoor bar behind their giant Einstein mural will most certainly provide you with a piña colada. Then you can trot down Botham Jean Boulevard for a look at local art and some great grub.

Poolside at The Joule

Similar to the Lorenzo, you can get a pass to The Joule Hotel pool for $50 and float at the sky-high edge of their glass-walled pool. Their coconut margaritas are all-day sippable. Take in the scene from the sky with a bird's eye view of downtown.

The Lazy River at The Gaylord Texas

Sure, this will cost you a few hundred dollars but ... just imagine the sun has trotted across the sky all day, wearing out the little kids, and traffic in the lazy river is thinning out. Then, your therapist, who also happens to be the poolside waiter, brings you a slushie piña colada that they made very special just for you. After gracefully plopping in your tube, you grab your drink (which you set down before you got in the tube) and just float. Maybe Will Smith's "Summertime" is playing overhead. And for one hot minute, everything falls in line.

Parliament is a purveyor of sophisticated craft cocktails made by the hands of a mad scientist. A piña colada isn't technically on the menu, but for sure they'll whip one up. We'd love to call them to verify, but they ripped the phone out of the wall years ago after it rang too much; they say they've never been happier. It's THAT kind of a piña colada place.

Our food writer Kristina Rowe suggests Beto and Sons. They're known for their liquid nitrogen cocktails and have a smoky, bubbling piña colada. It’s made with Cruzan dark rum, Soley Coconut Milk liqueur, pineapple juice, cream and encapsulated fruit pearls. Their patio is always hopping and a fun place to hang out
KEEP THE DALLAS OBSERVER FREE... Since we started the Dallas Observer, it has been defined as the free, independent voice of Dallas, and we'd like to keep it that way. With local media under siege, it's more important than ever for us to rally support behind funding our local journalism. You can help by participating in our "I Support" program, allowing us to keep offering readers access to our incisive coverage of local news, food and culture with no paywalls.
Make a one-time donation today for as little as $1.