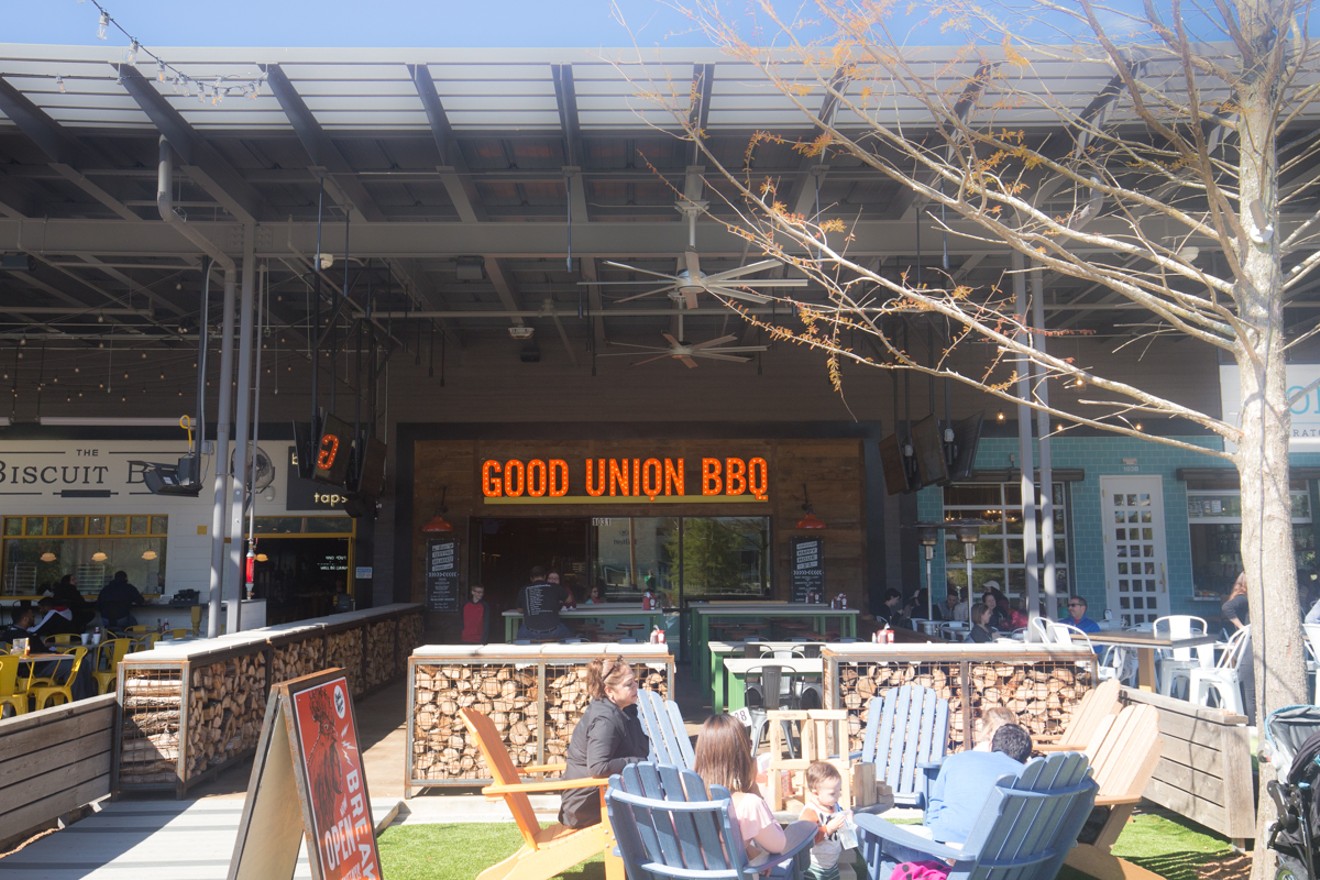 Picture-perfect weather and tasty barbecue put us in a good mood at Good Union Urban BBQ. Chris Wolfgang
You’d be forgiven for thinking of fall as that long-awaited party guest who shows up late then leaves early. The start of October still had temps in the high 90s, and Halloween week brought rain and some unseasonably cool weather with it. So when the clouds give way to sun and the thermometer finds that sweet spot, there’s nothing better than finding the nearest patio to soak in as much autumn time as possible.

We found ourselves in this boat recently and posted up with some delightful barbecue at Plano’s Good Union Urban BBQ. Good Union’s spot next door to the Biscuit Bar in the Boardwalk at Granite Park (there’s a second location in Richardson) has some indoor seating, but when the weather cooperates, there’s plenty of outdoor tables to oblige your al fresco dining whims.

Good Union's Pig Mountain lets you sample nearly all of the pork products in a single sandwich.
Chris Wolfgang
Besides most of the barbecue standards, the menu at Good Union BBQ offers a variety of fare, such as salads and burgers to satisfy most appetites. There's even breakfast tacos served every morning.

The smoked meats are offered as sandwiches, or you can build you own tray by the quarter- or half-pound, and add sides accordingly. There are also “stackers sandwiches,” which feature meat combos or extra toppings, which is where we started our ordering.

We settled on the Pig Mountain ($8.99) with pulled pork, ham, bacon and sausage, which afforded us a chance to try most of the pork products on the menu. On recommendations from our order taker, we also added a quarter-pound of burnt ends ($5) and a side of mac and cheese ($2.79) to round out the meal. We grabbed a seat in the sun, and our order was brought to us shortly thereafter.

Deconstructing our sandwich, none of the meats struck us as standouts on their own. The pulled pork had the most smoky barbecue flavor, and the sausage surprised us with a sharp bite, but the ham could have used more salt and the bacon more time in the pan. But when taken as a whole in large bites, with just the right amount of Good Union’s tangy sauce on board, we came away pleased with our decision.

Five dollars of burnt end happiness (and a delicious cornbread muffin to boot).
Chris Wolfgang
The burnt ends were also a smart choice. The cubes of fatty meat are also liberally sauced, and equal parts smokey and tender, rich with deliciously rendered fat. For just five bucks, adding a quarter-pound to any order is a no-brainer.

We were also impressed by the mac and cheese. Too many barbecue spots trot out a cheesy pasta not much different from the box variety, but Good Union’s version shows plenty of thought put into its execution. Large, ribbed elbows come generously doused in a creamy white sauce, and bits of sharp cheddar baked on top add extra zing. Smart touches continue in the jalapeño and cheese cornbread muffin that appears on every tray.

Sure, there's inside seating at Good Union, but when the weather obliges, why would you sit indoors?
Chris Wolfgang
Maybe it was the azure skies and mild weather that had us in a great mood, but we’re happy to report that the barbecue from Good Union did nothing to dampen our spirits. Even if the postcard-perfect days don't stick around forever, the solid fare from Good Union Urban BBQ makes for a tasty consolation.

Good Union Urban BBQ, 5880 State Highway 121, Suite 130-1, Plano. 469-485-1900.
KEEP THE DALLAS OBSERVER FREE... Since we started the Dallas Observer, it has been defined as the free, independent voice of Dallas, and we'd like to keep it that way. With local media under siege, it's more important than ever for us to rally support behind funding our local journalism. You can help by participating in our "I Support" program, allowing us to keep offering readers access to our incisive coverage of local news, food and culture with no paywalls.
Make a one-time donation today for as little as $1.