Whether Filled With Uptown Singles or Plano Families, Bread Winners Is a Brunch Star

This croque-madame gives weight to the idea that more sandwiches should be named after gender-specific titles. Hypothetical examples include the Mr. BLT and Mrs. Tuna Melt. Kathryn DeBruler
Having taken home the gold four times in our Best Of Dallas brunch and breakfast categories, Bread Winners Cafe and Bakery has proven to be the Venus Williams of the a.m. food Olympics. And just like Williams, Bread Winners has enjoyed nearly universal respect from critics and the public alike. Its popularity has only increased with time, with six locations now dotting the Dallas area and a legion of fans willing to wait untold minutes for a table on weekends.

But it’s been a few years. Our last long-form expose of its brunch service came in 2010. Seven years later, we went back, and this time to the familyville (e.g. Plano) location.

Familyville, indeed. While the Uptown location affords views of couples, friend groups and other, nontethered persons helping themselves to large plates of eggs, the Plano location acts like a periscope into the future, revealing the ways in which the nontethered will meet their ends. It shows us that they have moved northward, purchased tract homes and engaged in practices that have resulted in miniature versions of themselves. The periscope also shows that these now legally linked people-masses enjoy helping themselves to large plates of eggs with as much gusto as their Uptown singleton selves once did — only now, they must periodically pause to help mini persons cut their sausage. It is at once a fascinating and disturbing glimpse into how brunch links the past with the future in a hollandaise-drizzled time warp.

To what does Bread Winners owe its success, a success that cuts through time, marital status and neighborhood coolness? We posit the convergence of three things: diversity of choice, a sensible pricing structure and good, old-fashioned heapin’ helpin's.

By diversity of choice, we are referring to Bread Winners’ behemoth of a menu. With five Benedicts; an entire section of scrambles, burgers, sandwiches and salads; a senior-level thesis on pancakes and waffles; and a specials list that in and of itself comprises more items than most restaurants' entire brunch menus, Bread Winners appeals to our very human need to feel that we have control over our lives. That we have choice — and in this case, that choice takes the powerful form of which type of French toast to get. 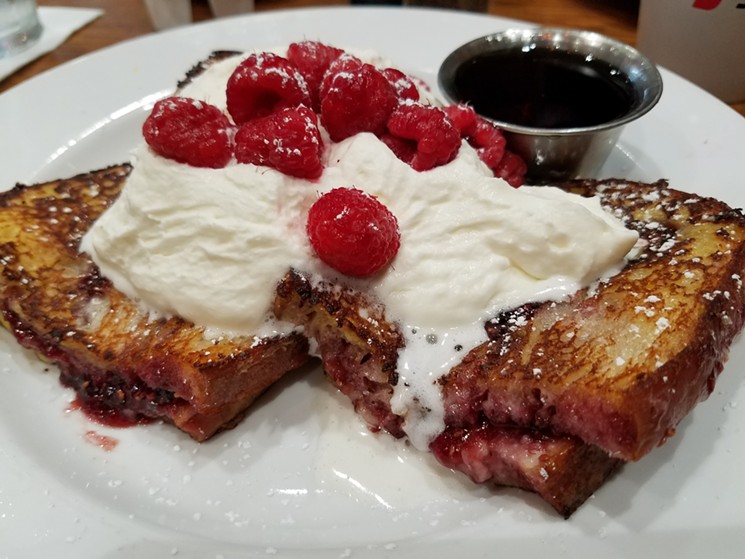 The Normandy French toast with an entirely unnecessary cup of syrup.
Kathryn DeBruler
But ours is a deterministic fate, and the brunch gods had decided that we would order the Normandy ($11) before the menu was ever opened. Here, thin slices of sourdough sandwich a generous filling of cream cheese and raspberry jam before the lot is dredged in egg custard, pan-fried and topped with a cloud of whipped cream. The tartness of the jam dials back the richness of the dish and keeps things palatable, though there is no denying that this is an exceedingly indulgent dish. Perhaps the best tactic for tackling this and so many of Bread Winners’ other offerings is to storm it. That is, to breach to the plate from its weakest point — typically the outermost edge — and then dutifully, purposefully work toward the center.

That brings us to the heapin’ helpin's portion of our theory. Plates at Bread Winners are generous both in terms of volume as well as total caloric load. Take the croque-madame ($14), for example. In its origins, the madame differs from the monsieur by way of an egg (either poached or fried) while all other aspects of the sandwich remain the same — ham, pain de mie and cheese. Bread Winners substitutes sourdough for the pain de mie and adds jalapeño cream gravy in an apparent provocation to the notion of diets everywhere. It is really a very clever addition, the gravy. Twinged with a subtle but unmistakable peppery, green note from the jalapeños, the gravy unites the sandwich’s individual elements in a creamy, slightly verdant hug. The potatoes served to the side were undercooked, an apparent afterthought.

Entrees hover around the $12 to $14 mark — fairly typical for brunch pricing, but taking the serving size into consideration, it makes an entree seem downright thrifty. The drinks are the only exception. Traditional mimosas are unforgivably priced at $10, which is the same price fetched by drinks like the brunch punch and mango fizz. A better, albeit sober, option is a simple cup of coffee. For $3, you will never see the bottom of your mug, and what’s more, it’s an excellent Italian dark roast.

Back at the Plano Bread Winners, a child throws a slice of pumpkin bread on the ground. A teenager sits with his family and laughs at something he sees on his phone. The adults at the table take little notice as they tend to their large plates of eggs. They are occupied, if only for this brief moment of time, by the goodness of their respective choices. What a scramble, they say. What reasonable prices. And so much of it, too.

And so Bread Winners wins a few more fans.