Chef Diana Zamora: From Kitchens to Pop-Ups and Helping Others Over the years, the Northwest Dallas resident has built an impressive resume: In the past year, she has been the pastry chef at Nosh Bistro and the self-proclaimed “doughnut queen” at Lockwood Distilling Co., and she previously had a stint at Stock & Barrel.

But now she’s on a mission to help provide food to industry peers and hungry families who have been affected by the COVID-19 pandemic. 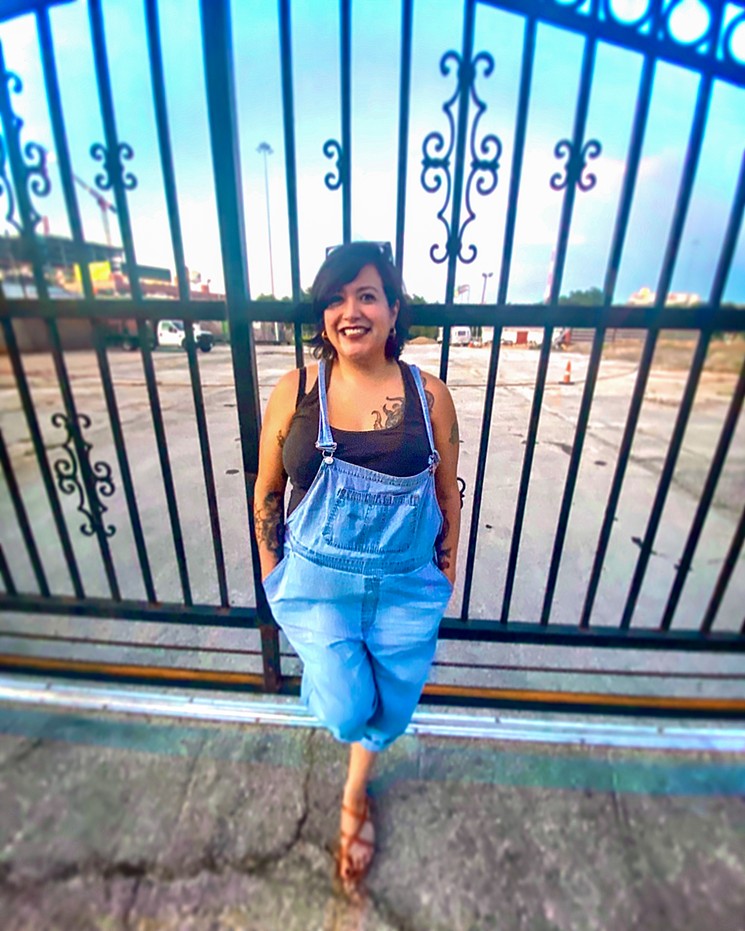 Since the pandemic took over Dallas, chef Diana Zamora has been spending most of her days helping others.
Alejandra Georgina
From 2015 to 2017, Zamora lived in Plano, working as the culinary creations and catering coordinator at My Possibilities. She decided to return to Dallas last November after her mother was diagnosed with Stage 4 cancer.

“At first it was weird,” Zamora says of moving back home, “pero like, now it’s pretty cool to live in my childhood home again. My favorite part of the house is the beautiful garden that my abuelita started and my mom has continued to maintain.”

In the kitchen, Zamora loves to make sauces. Sweet, savory or spicy, she loves them all. She says sauces can make or break a dish, especially for her children, whom she calls “picky AF” and her biggest critics.

At the moment, the 38-year-old chef is working pop-ups, private gigs and any and all food-related side hustles. She has her Sweet D’s Throwback Snack Pack drive-thru pop-up Aug. 30, Sept. 11 and 13 at Sandwich Hag. For $15, customers can buy a pack of Zamora’s signature confections, including her oatmeal cream pies and rum rice crispy treats.

But when she’s not working on pop-ups or private events, Zamora is committed to giving back. She’s actively involved in Harvest Project Food Rescue, a program providing fresh produce to families in need in Dallas and Tarrant counties at no cost. In April, Zamora launched Project La Familia to help hospitality industry workers as well as families in need.

“It started off as a group of fellow industry peers who were either furloughed or totally laid off,” Zamora says. “We all got together and wanted to put some good vibes back into the universe and do something productive with our particular skill set. We started producing supplemental meals and snacks, using all donated products, for families with children in DISD.

“As a result of this, we were able to grow the number of families we were serving, including homebound individuals, and developed new strategies on how to better serve the community,” Zamora says.

"...It's pretty cool to know that something I created evokes a good feeling in the people eating my food,” Diana Zamora says.
Alejandra Georgina
As a pop-up chef, Zamora has had to become flexible with the ever-changing guidelines. She does, however, notice that small business owners are receiving a lot of support.

Zamora is finding community outreach to be rewarding and fulfilling. She enjoys being part of a movement and having a sense of purpose during these challenging times.

“With regards to being a chef, it's pretty cool to know that something I created evokes a good feeling in the people eating my food,” she says.

In addition to her upcoming Sweet D’s pop-ups, Zamora is also working on a series of pop-ups presented by the Food Justice Coalition and led by Harvest Project, Farmers Assisting Returning Military, Dallas For Change and 4DWN Project. She will also continue to fight for undocumented immigrants in the workplace and work to put food on people’s tables.

“The struggle of the undocumented labor force, that didn’t receive a stimulus check or is afraid to ask for help because of immigration status and the current sociopolitical climate, is a huge issue that isn’t being given the attention it deserves,” Zamora says. “Something I have observed first-hand, whether we want to accept it or not, is that a significantly large portion of service industry labor is provided by undocumented workers.

“One of the challenges that this population faces is the loss of anonymity when asking for assistance… No matter what the socioeconomic status of us all, we are all facing the same instability right now. I strongly believe that this society relies heavily on a group of people that we are just not doing enough for.”
KEEP THE DALLAS OBSERVER FREE... Since we started the Dallas Observer, it has been defined as the free, independent voice of Dallas, and we'd like to keep it that way. With local media under siege, it's more important than ever for us to rally support behind funding our local journalism. You can help by participating in our "I Support" program, allowing us to keep offering readers access to our incisive coverage of local news, food and culture with no paywalls.
Make a one-time donation today for as little as $1.