Bartender Kristen "Marge" Johnson mixes a Flaming Moe at the Whippersnapper's newest Simpsons-themed pop-up bar. Danny Gallagher
The idea of a Simpsons-inspired pop-up bar from The Whippersnapper created a lot of surprised faces because it feels like something the bar and adjoining burger joint would have done by now.

The McMillian Avenue bar earned its fame from creative, pop-culture makeovers that spring up throughout the year. So far, the place has turned its doors and walls into holy shrines to franchises like Breaking Bad, Family Guy, The Office and the Harry Potter canon. They attract huge crowds that probably test the limits of their fire code standards thanks to huge word-of-mouth phrases like "Dallas has its own Leaky Cauldron" can generate.

The Simpsons is the modern granddad of pop-culture fandom with 32 seasons of animated television and counting, one hell of a fun movie and more cultural respect than three more unnecessary Star Wars prequel trilogies could ever generate. This probably why it seems as though The Whippersnapper should have done this by now.

The Whippersnapper's latest pop-up is another door to a fan celebrated universe littered with ubiquitous to obscure Springfield dishes, drinks and décor from the entrance to the menu. It caters to everyone from the loyal Simpsons fan (like myself) to the hermits who somehow don't know Homer Simpson's first or last name.

The entranceway that's served as the portal to so many other virtual TV and movie universes has been painted with meticulous strokes to look like the storefront for Homer's hometown bar Moe's Tavern. The same goes for the bar's adjoining High Fives with a sign that's been redesigned to look like a Krusty Burger franchise and a menu of satiric culinary items like the tasty and aptly named "Clogger Burger."

The interior is covered with Simpson family portraits, decorations and collectibles all surrounded by televisions streaming episodes of the show. The "Bort" license plate behind the bar is such a wonderful touch and very hard to not steal and add to my collection. 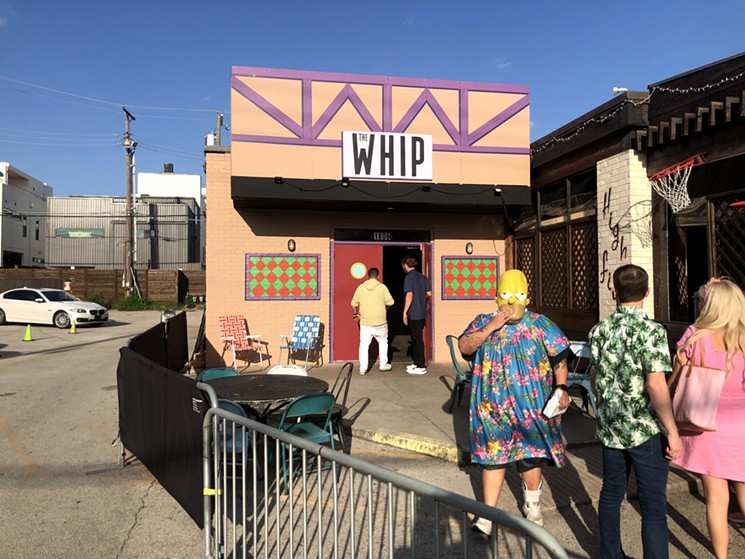 You remember the mumu episode, right?
Danny Gallagher
These pop-ups only work if the staff is also in on the fun, and they clearly are. They dress up as characters from the show and answer to their character names before giving guests their real ones. Some even go beyond just slapping on a white short sleeve shirt and blue pants. The DJ for the night dressed as Homer from the seventh season episode "King-Size Homer," in which our favorite blue-collar blob purposely becomes morbidly obese so he doesn't have to go to work. The outfit even had an accurate floral mumu and oversized white driving cap.

The drinks are, of course, the main stars of this attraction. The Simpsons universe is known for its subversive shots on marketable commercialism with slightly off-putting but catchy names for mass-produced comestibles and concoctions such as the Kwik-E-Mart Squishee, Duff Beer and the famous Flaming Moe. They are ambitious attempts to replicate these pieces of pop food and drink trivia into real-world items. Some make it and others don't.

The Flaming Moe, perhaps the most famous cocktail creation that Homer accidentally made one night with Krusty's Non Narkotik Kough Syrup and fire, didn't quite hit the spot and not because they left out the cough syrup. It plays too hard with the novelty of the "flaming" in its name by mixing Altos Blanco Tequila and Blue Curacao with Tabasco sauce and a Tajin salt rim. The taste is just too bizarre.

The Simpsons & Sons Revitalizing Tonic, the concoction Grandpa Simpson makes and hawks to help couples "put the dowsers back in your trousers," is a little bit better in terms of taste. Combining bourbon with black tea syrup and lemon oil tastes good and it's got a surprising kick, which is probably something I should have expected before I took a sip since the original recipe requires the use of an old man's bathtub.

The strawberry, lemon and vodka cordial called Lil Lisa's Slurry is a far better choice in terms of taste along with the Frozen Squishee that's also tasty and more canon accurate. Lil Lisa's Slurry, named after the multipurpose food factory goop Mr. Burns mass produces when Lisa tries to convince the bald baron to be more green, is fruity and crisp without being so sweet that your cheeks cave in from cramping. The Squishee is thick and syrupy but not to the point that you have to take a huge, air-sucking sip that makes you go crazy Broadway-style and wake up in a Junior Camper uniform. Both are very refreshing, especially as the summer weather is starting to make us wish we moved to a more temperate climate when we had the chance. The Whippersnapper's new Simpsons pop-up concept features hand-painted portraits of the show's most memorable lines and moments.
Danny Gallagher
A big part of what makes The Whippersnapper's latest pop-up concept such a special joy to experience, especially for fans of the show, is how the staff and creators clearly show their fan cards in what they've produced. The Simpsons may seem a little too obvious for a pop concept if you're one of those people who whine that something you grew up with isn't as good as your childhood standards. But it's the perfect product for our times. It's a testament to the show's reach, influence and strength. Even if you're one of those hipster snobs who say the show's not as good as it used to be, you also have to admit that you fear a world where The Simpsons is no longer a thing. It's the last vital sign of our healthy sense of cynicism and self-awareness in a universe crawling with vapid celebrity, low forms of leadership and a sense of compassion that's practically on life support.

I'm not just excited that we have a Simpsons bar. I'm glad we live in a world where we still have The Simpsons that can still give us things like The Whippersnapper's Simpsons pop-up bar.

The Whippersnapper/Simpsons Pop-Up Bar, 1806 McMillan Ave., 6 p.m. to 2 a.m. Wednesday through Saturday, Closed Sunday - Tuesday.
KEEP THE DALLAS OBSERVER FREE... Since we started the Dallas Observer, it has been defined as the free, independent voice of Dallas, and we'd like to keep it that way. With local media under siege, it's more important than ever for us to rally support behind funding our local journalism. You can help by participating in our "I Support" program, allowing us to keep offering readers access to our incisive coverage of local news, food and culture with no paywalls.
Make a one-time donation today for as little as $1.