Yo, Bitch! Take a Look in The Whippersnapper's New Breaking Bad Bar 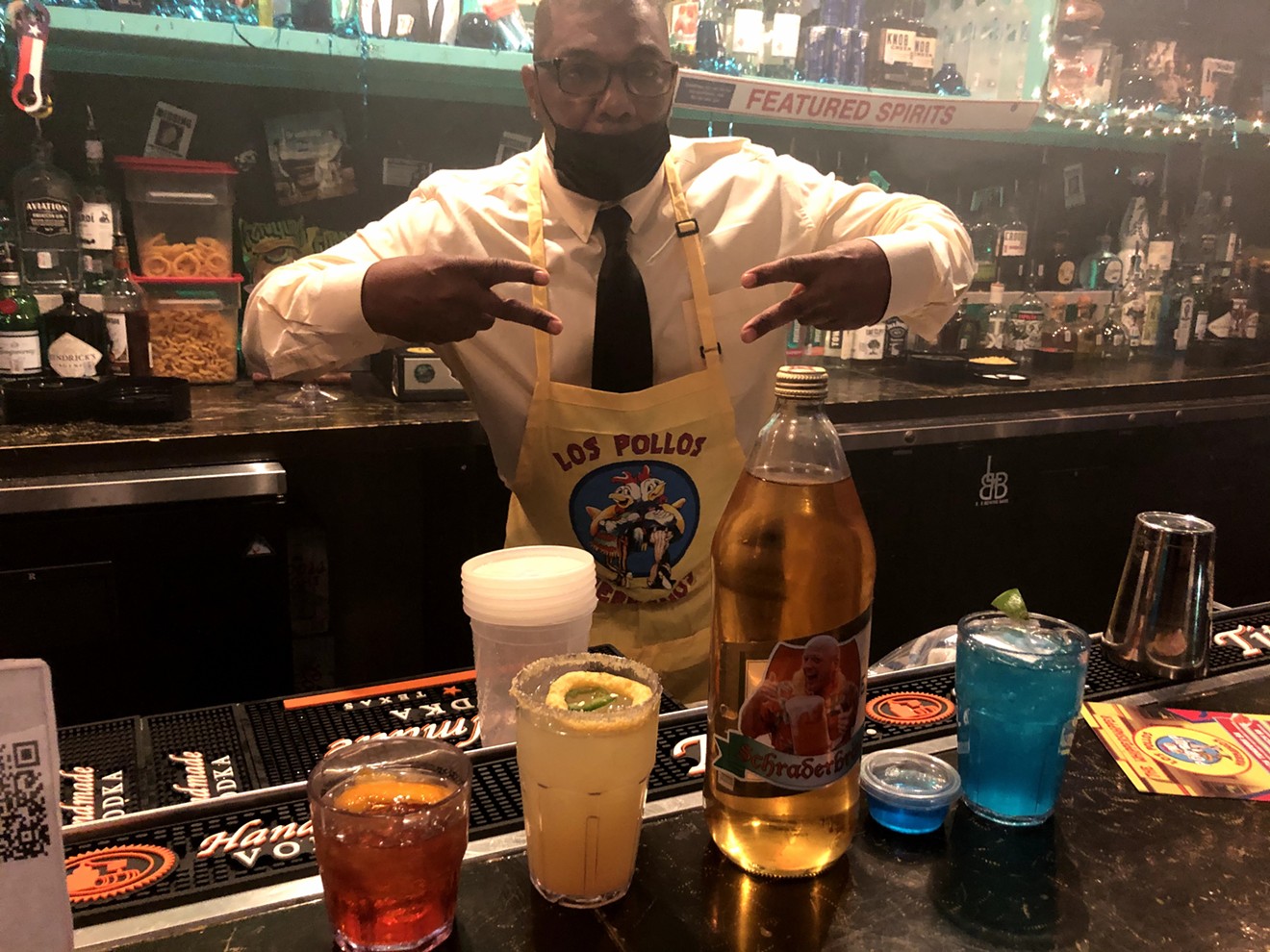 "Under COVID conditions, what a better way to remind people about masks than to start a fake meth lab?" says Philip Schanbaum, the co-founder of This and That Hospitality, who designed the new pop-up bar experience.

The McMillian Avenue bar in the Henderson Avenue shopping and restaurant district broke ground on its Breaking Bad bar concept last Wednesday. The Whippersnapper has been redone to celebrate the Emmy Award-winning drama about a meth-peddling, high school chemistry teacher who builds a drug empire in suburban New Mexico — from the wall decorations to the bartending staff, who've taken on some of the show's central roles for their wardrobes.

The noticeable changes start before you even walk through the front door. The brick wall entry has been repainted by local artists Johnny Freeman and Kyle McClard to look like the beat-up 1968 Fleetwood Bounder RV that Walter White, played by Bryan Cranston, and Jesse Pinkman, played by Aaron Paul, use to cook their patented and addictive brand of blue glass. The details are intricate. The mural's door even has the same five strategically replicated bullet holes shot out from the inside that the show's RV sustained when Walter gassed two rival gangsters with phosphine gas in the show's opening episode.

"We wanted to do a full transformation from the moment you walk through the door to what you're hearing and feeling," Schanbaum says.

The Whippersnapper's new Breaking Bad themed pop-up bar features a mural recreation of the show's iconic RV complete with five bullet holes in the door and a pair of lawn chairs.
Danny Gallagher
The first sight that greets guests as they enter the bar is the strings of blue lights on the ceiling. This light blue color is replicated throughout the bar from the décor to the drinks in honor of Walter and Jesse's signature "Blue Sky" brand of methamphetamine.

Portraits of the show's most memorable characters also painted by Freeman and McClard line almost all of the walls of the space, some featuring their faces and most memorable lines including a portrait of DEA agent Hank Schrader, played by Dean Norris, uttering his most famous threat to Walter "I will put you under the jail!" behind a video camera with a working flashlight that doubles as a photo booth. The wall behind the bar's jelly bean themed pool table features an impressive sepia mural of the show's cast of characters. Every TV in the joint is also playing an episode from the show's five seasons. Artists painted portraits and murals of Breaking Bad's central cast of characters for The Whippersnapper's Breaking Bad pop-up bar.
Danny Gallagher
Of course, the special food and drink menus have been changed to offer stuff that references the show through chief ingredients and appearance. The food comes from the bar's adjoining restaurant High Fives, which has also been transformed into a Los Pollos Hermanos fast-food chicken franchise — the front business for the cold and calculating drug kingpin Gus Fring — with Pollos-style chicken tenders and a scrumptous Hermanos fried chicken sandwich with aioli and dill pickle slices on a Hawaiian bunch. And no Breaking Bad dining establishment would be complete without a "Heisenburger."

The drinks go out of their way to link to the show while offering a tasty and refreshing menu of Breaking Bad aperitifs. They range from the ordinary like a 40-ounce bottle of Schraderbrau bottled beer to the outlandish but still delicious Blue Sky, a cocktail made from Teremana tequila, triple sec, lime juice and blue Curacao (of course) topped with a lime slice and a small plastic baggy of blue candy meth.

The Whippersnapper has also created the greatest Breaking Bad drink ever to cross a human's lips: a citrusy vodka-infused cocktail garnished with Pinkman's favorite snack Funyuns, called the Captain Cook. The glass contains a mix of Funyun and jalapeño vodka and pineapple and lemon juice, ground Funyuns on the rim and a single Funyun ring floating on the top. It sounds like a dare, but the unique mix of sweet and extreme salt edged with the twinge of jalapeño spice works very well. 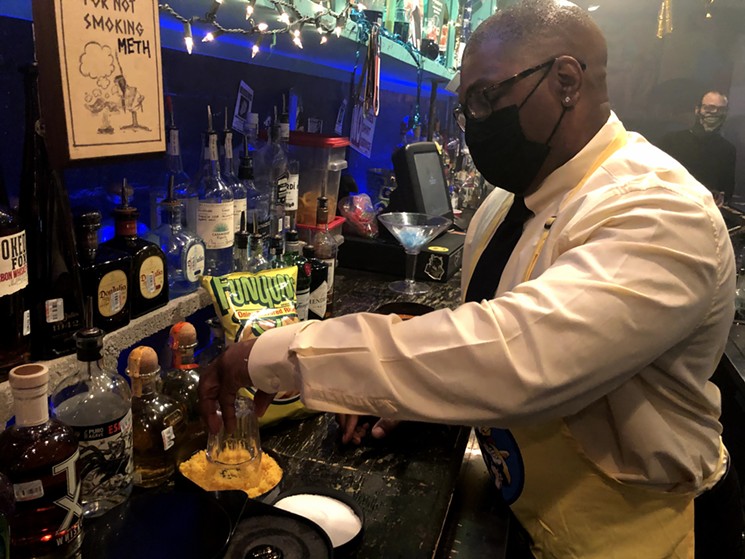 Bartender Michael Casteel coats a glass with ground Funyuns for The Whippersnapper new signature Breaking Bad drink called Captain Cook, a vodka cocktail infused with Jesse Pinkman's favorite bagged snack.
Danny Gallagher
Schanbaum says the bar's reopening also comes with safety precautions and occupancy restrictions to help protect guests from the coronavirus — which made masks standard apparel even for life outside of a mobile meth lab. All guests are required to reserve a table ahead of time on a first-come, first-serve basis with a maximum occupancy of 55 people outside and 40 in the exterior area. Hand sanitizer bottles are placed on every spaced out table and across the main bar.

Guests are also required to wear masks unless they are seated while eating or drinking. It's not only a safety measure but it's also an easy way for guests to participate in some minimal Breaking Bad cosplay.

"[The Breaking Bad theme] is a great way to get our numbers back up to what they used to be," Schanbaum says. "Our goal is to make sure it's safe." Guests can have their picture taken at The Whippersnapper's Breaking Bad themed pop-up bar in a special photo booth themed with the scowling stare of the show's tough DEA agent Hank Schrader, played by Dean Norris.
Danny Gallagher
KEEP THE DALLAS OBSERVER FREE... Since we started the Dallas Observer, it has been defined as the free, independent voice of Dallas, and we'd like to keep it that way. With local media under siege, it's more important than ever for us to rally support behind funding our local journalism. You can help by participating in our "I Support" program, allowing us to keep offering readers access to our incisive coverage of local news, food and culture with no paywalls.
Make a one-time donation today for as little as $1.