Crispy pig's head carnitas Courtesy of CBD Provisions
We can all agree that Dallas has some incredible restaurants and new ones are opening all the time. While standards, burgers, steaks, pasta and seafood are everywhere, so are dishes that challenge us to take our tastebuds on an exotic adventure. Here are some unique eats that anyone with an adventurous appetite should check out.

When you tell people you are going to CBD Provisions, the first thing you will likely be asked is whether you’re getting the Crispy Pig’s Head Carnitas. It’s what this place is known for, and it is literally a pig’s head —snout, eyes, and ears included — that will arrive at your table. It has been brined and slow roasted enough to be pull-apart tender yet perfectly crispy on the outside. It is served family-style with salsa roja, salsa verde, corn tortillas, cilantro and onion. If you’re sharing this dish with more than two people, you’ll need to flip a coin to see who gets the best part, the crispy pig ears. There are only two of them, so if there are more than two of you, get ready to rumble.

Let’s be clear: Sweetbreads are not sweetened bread. Rather, it's organ meat from the thymus gland or pancreas of a young cow or lamb. The texture is smooth, tender and moist. The outside crisps up easily, and they are great served with either a rich or acidic sauce. If you’ve never had sweetbreads before, take a leap of faith and give them a try. You can thank us later. Find them sauteed in lemon-butter, capers and white wine at Café Madrid. They are the perfect way to start any Spanish tapas adventure.

Speaking of Spanish tapas, another must-have unique eat is the fried blood rice sausage (morcilla de arroz frita) at Si Tapas. Morcilla originated in Spain and is the first sausage to be made with a recently slaughtered pig. It consists of fat, pork blood, onions and rice in a casing. When it is cooked and fried in olive oil, it becomes the perfect bite of spiced sausage with a mild tang and a crumbly texture.
click to enlarge

Chef Teiichi Sakurai, a James Beard Award regular from Tei-An, serves a very unique (almost iconic) white seaweed salad. It’s not like any seaweed salad you’ve ever had and after eating this one, you’ll never want the traditional green one again. Delicious white seaweed drizzled with a “vinegar-y” sauce and topped with a few sliced cucumbers. If you’re looking for something light and refreshing, this is a must-have.

There is nothing better than a bowl of phở or ramen on a cold winter day. But it’s a little hard to eat when it’s 104°F outside, especially if you load your bowl with sriracha and jalapeños. Now, when you’re craving phở or ramen in the summer, you can check out the phởrrito or ramenrito from Cris & John. We were surprised about how similar this dish actually tastes like your favorite bowl of phở or ramen minus the broth. Make sure you order some “angry broth” if you’d like to kick it up a notch.

Otherwise known as Rocky Mountain oysters or prairie oysters, calf fries are often considered a Western delicacy, and they have a long-standing tradition in Cowtown. Riscky’s Steakhouse in Fort Worth sells about 150 pounds of calf fries each week. So, what are they? They are “that” part of the calf that is removed in his youth, so he grows into a calmer (less masculine) and meatier animal. They resemble chicken nuggets and are usually battered, deep-fried and served with a homemade gravy. How can you go wrong with that?

The Cactus Fries at The Rustic

When most people see a cactus in the desert, the last thing they think of is putting it in their mouth. Cactus has a similar consistency to green beans with a slightly sour flavor. The Cactus Fries at The Rustic are beer-battered and served with Texas hot ranch dipping sauce. The batter on them is light and crispy and the cactus itself tastes like a cross between fried okra and fried pickles.

Kirin Court offers some of the finest Chinese and dim sum in Dallas. Steamed chicken feet from Kirin Court were recently thrown into the spotlight by the Real Housewives of Dallas, so we decided to check what this delicacy was all about, and it was better than expected. The popularity of chicken feet is largely owed to dim sum. The feet are deep-fried and braised to soften the skin and then heavily sauced and spiced to give it a delicious flavor.

Ants Climbing Trees is a classic Sichuan dish in Chinese cuisine. The name of the dish in Chinese, mayishangshu, means ants climbing a tree. It is called this because the dish has bits of ground pork clinging to Korean glass noodles, evoking an image of ants walking on tree twigs. A great place to try this dish is at Sum Dang Good Chinese in Trinity Groves.

Combining the chewiness of rattlesnake meat and the flavorful taste of fresh rabbit into a sausage casing and smoking it until you get that crisp bite is genius and is exactly what they’re doing at Lonesome Dove Western Bistro in Fort Worth. Rattlesnake-rabbit sausage is served with spicy manchego rosti and crème fraiche, and it is one of their most popular dishes. It feels like the circle of life is coming together as you bite into the predator and the prey simultaneously.

Menudo is a traditional Mexican soup made with cow stomach (tripe) in broth with a red chili pepper base. Hominy, lime, onions and oregano are used to season the broth. This is comfort food at its best and the best we’ve had is at Gonzalez Restaurant, which has been serving authentic Tex-Mex to the Dallas area since 1973. Be sure to grab some of their award-winning tortillas to dip in the delicious broth.

From time to time, you come across a menu that includes foie gras, which is essentially duck or goose liver and is considered a delicacy. But our friends at Mot Hai Ba have taken their foie gras to the next level with their kimchi and fois gras dumplings. The dish is made with house-made kimchi and foie gras dumplings with warm compote of D’anjou pears cooked in pear vinaigrette until caramelized then topped with A5 wagyu ribeye and finished tableside with a drop of sizzling and perfumy beef pho tallow. The combination of all of these ingredients both in and on top of the dumpling is melt-in-your-mouth Instagram-worthy kind of delicious.

Tara’s escargot soufflé at Rise is what dreams are made of. Escargot is French for snail, and it is a delicacy in many European countries like France, Spain and Portugal. If you love garlic butter, light fluffy souffles and basil pesto, then this is a must-have. The escargot is sauteed in garlic butter and then nestled beneath the souffle puffs, which are then drizzled with pesto. You will eat this dish slowly and savor every bite as your eyes roll back into your head.
click to enlarge 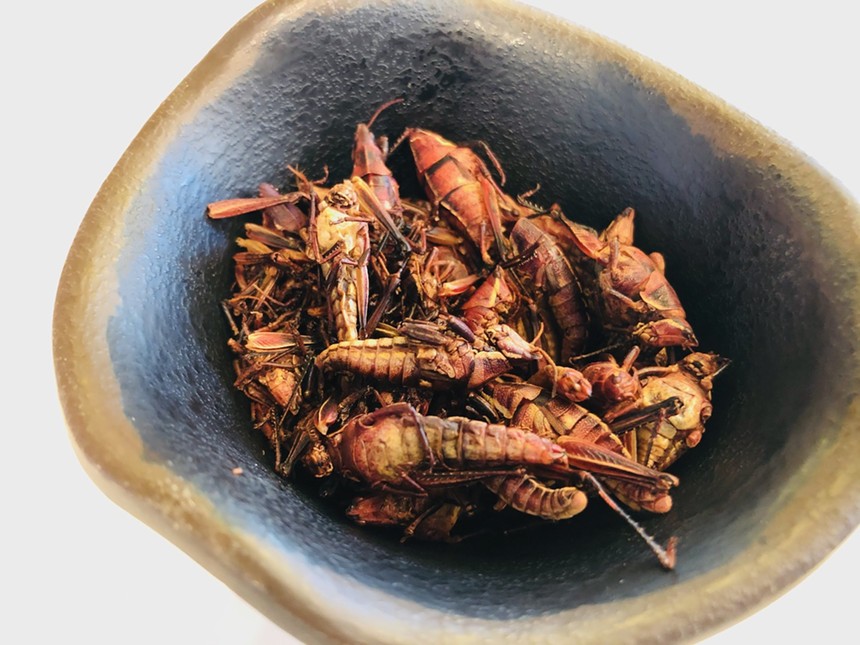 Some call chapulines the protein of the future.
Lauren Drewes Daniels

Chapulines (grasshopper tacos) from El Come Taco aren’t always on the menu, but when they are, they are surprisingly popular. Served on a flour tortilla topped with guacamole, these toasted critters are salty and have a supernatural crunch to them. If you’re a little reluctant to try them, just squeeze lime on it and chase it with a nice glass of mezcal. You’ll be fine.
KEEP THE DALLAS OBSERVER FREE... Since we started the Dallas Observer, it has been defined as the free, independent voice of Dallas, and we'd like to keep it that way. With local media under siege, it's more important than ever for us to rally support behind funding our local journalism. You can help by participating in our "I Support" program, allowing us to keep offering readers access to our incisive coverage of local news, food and culture with no paywalls.
Make a one-time donation today for as little as $1.