Spicy fish soup Angie Quebedeaux
When we first read about B2J Suancai Fish, we asked some of our more adventurous foodie friends to join us, and they turned their noses up at the thought of eating "sour fish soup.” However, as we read more about it, we learned that sauerkraut is gai choi or pickled mustard greens, which called 'suan cai' in Mandarin. It’s Chinese sauerkraut. Well, damn, why didn’t you say so?

Cantonese often call it syun choi (sour vegetable) or ham choi (salty vegetable). The vegetables are fermented using only salt, washed rice water and gai choi for about 21 days. And while you may think it sounds weird at best, it's delicious.

Owners Peipei Cao, and her husband, Xiaoming Lui, started this restaurant in Seattle after they visited a Chinese sauerkraut fish restaurant in Guangzhou, China. They knew fresh fish tastes better than frozen fish and spent almost a year trying to find the right supplier in the U.S.

They landed on Dutchboy Farm in Idaho, which is a hatchery and fish farm situated on a geothermal spring, so they’re able to farm warm-water fish such as tilapia year-round. The live fish are flown in weekly and kept in a tank until they are ready to be served. They are then placed in the spicy and sour broth where the fish meat cooks to the perfect temperature.

Spicy and Sour Fern Starch Noodles
Angie Quebedeaux
There are four locations of B2J Suancai Fish, two in Seattle, one in Houston and one in Plano. The Plano restaurant is in a strip center on Spring Creek Parkway, close to Central Expressway. The sign on the building is unassuming; under the Mandarin, it simply says “Chinese Sauerkraut Fish."

For cold appetizers, a popular choice is the spicy and sour fern starch noodles ($6.99). It looks like squid-ink noodles and is topped with chiles, sesame seeds and their signature sour sauce. The portion is large, so be careful not to fill up on it before your entrée arrives. Century egg with fried jalapeño and Chinese vinaigrette
Angie Quebedeaux
Other popular cold appetizers are the sweet rice stuffed lotus root ($7.99) and the century egg with fried jalapeño and Chinese vinaigrette ($7.99). The century eggs look like they’ve been fermenting for at least 100 years, but don’t judge this egg by its yolk. They are delicious and are a perfect accompaniment to the soup. Take a slice of egg with the rice and broth from the fish soup and prepare for your head to nod in agreement.

For some, their signature sauerkraut fish may not sound the least bit appetizing, but trust us when we say this rich, sour, oily, velvety and spicy dish is nothing short of spectacular.

The broth is full of ribbons of pickled mustard greens, which is their version of sauerkraut. There's also loads of ginger, dried chilies and Szechuan peppercorns. Delicious fresh chunks of fish or beef rise to the top of the broth. The fish is fresh, firm, and holds together when plucked out with chopsticks.

To order, first choose the flavor of the soup: the classic spicy sour, spicy or vine pepper numb. Next, you choose a size (small, medium or large) and your main ingredient: tilapia, largemouth bass, wagyu beef or a combination of tilapia and beef. 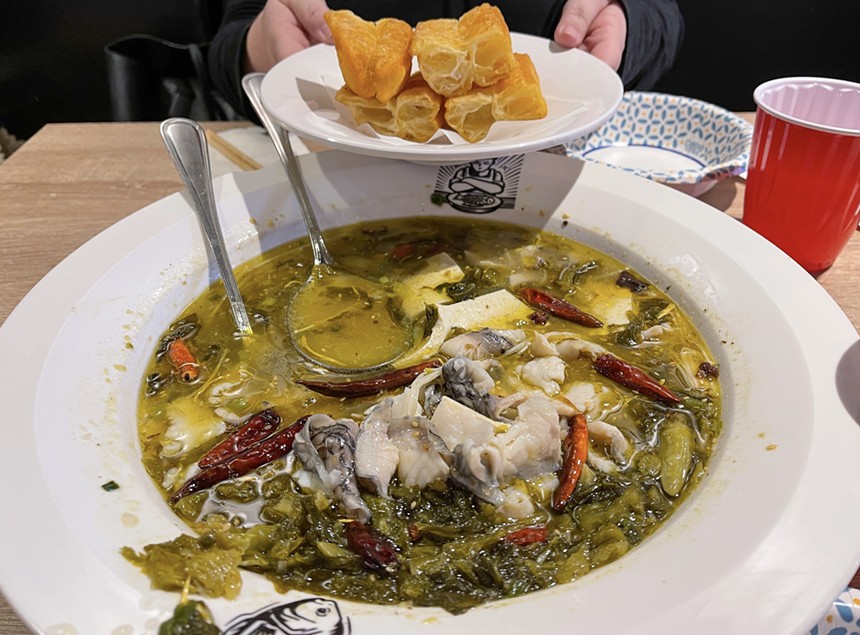 Small tilapia classic spicy sour soup with tofu and enoki mushrooms with fried Chinese donuts
Angie Quebedeaux
The presentation is spectacular. These enormous bowls are served with a side of rice. Spoon the soup on top of the rice and enjoy.

We ordered the small tilapia combo for two and went with the classic spicy-sour flavor. We added tofu and enoki mushrooms, which were great, but next time we would try it with the cellophane noodles as that seemed to be a popular add-on at other tables.

This soup wasn’t too spicy, although we used extra napkins to wipe our foreheads. The table next to us got spicy and while their mouths were on fire, they loved every bite of it. We didn’t see anyone order the vine pepper numb flavor; it sounds like a death wish or at least something that should require you to sign a waiver of liability before eating.

Notice the bowl of soup on the table for a good perspective on how big the big bowl actually is.
Angie Quebedeaux
They say the small soup is enough to feed one or two people, but the bowl is 18-inches wide. We say more like four people. The small soup ranges from $28.99 to $49.99 depending on your choice of protein. Large soups range from $56.99 to $89.99.

The best deal is one of their special combos, which serves either two, three or four people. In addition to the soup, you get add-ons, fried Chinese doughnuts, appetizers and rice ($48.99 to $96.99). That sounds pricy on the surface but considering the amount of food you get and the number of people it serves, it equals about $12 per person with leftovers.

The place has only 10 tables. If you get there during prime dining hours, expect a wait. However, you can save yourself having to stand in line for very long by joining their waitlist via Google.

B2J Suancai Soup, 151 West Spring Creek Parkway, Ste. 517 (Plano), 11 a.m. to 2:30 p.m., 5-8:30 p.m. Monday - Sunday.
KEEP THE DALLAS OBSERVER FREE... Since we started the Dallas Observer, it has been defined as the free, independent voice of Dallas, and we'd like to keep it that way. With local media under siege, it's more important than ever for us to rally support behind funding our local journalism. You can help by participating in our "I Support" program, allowing us to keep offering readers access to our incisive coverage of local news, food and culture with no paywalls.
Make a one-time donation today for as little as $1.