Lucky's Hot Chicken will take the space of a historic building in East Dallas. courtesy Vandelay Hospitality Group
Something new is burning up in East Dallas.

Hopping on board the Nashville hot chicken craze are building designer Lou Olerio (Shayna’s Place) and chef Josh Bonee (formerly of Stephan Pyles Flora Street and the Statler), who are set to open their collaborative effort, Lucky’s Hot Chicken, in East Dallas this spring.

“I knew there was a [hot chicken] void in Dallas from seeing other markets like L.A. and Nashville and how well it performs there,” Olerio says. “I saw that there wasn’t really a dominant leader in the Dallas market. I connected with Josh through a mutual friend, and since he’s from Nashville, he had the expertise to design the menu and execute the recipes.” 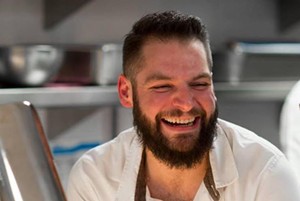 Chef Josh Bonee is working with Lou Olerio to bring Nashville hot chicken to Dallas.
courtesy Josh Bonee
Lucky’s will offer chicken wings, breasts and thighs, chicken tenders and two different chicken sandwiches. They will have various Southern side dishes, such as mac ‘n cheese and collard greens. Guests of Lucky’s will also have the option to add a waffle to their chicken order.

While Lucky’s won’t offer any hard liquors, they plan on having a local beer program, as well as an extensive line of milkshakes. Plus, frozen custard as additional dessert options.

“There aren’t a lot of places doing chicken and waffles in Dallas that aren’t full service,” Olerio says. “This is going to be very affordable, approachable and still high-quality food.”

“We’re going to see how people like it, and then we may consider being open for late nights,” Bonee says. “We want to pull in the Deep Ellum crowd, the East Dallas crowd and people who work in the hospital nearby.”

Lucky’s Hot Chicken, 4505 Gaston Ave. (East Dallas). Planned to open this spring.
KEEP THE DALLAS OBSERVER FREE... Since we started the Dallas Observer, it has been defined as the free, independent voice of Dallas, and we'd like to keep it that way. With local media under siege, it's more important than ever for us to rally support behind funding our local journalism. You can help by participating in our "I Support" program, allowing us to keep offering readers access to our incisive coverage of local news, food and culture with no paywalls.
Make a one-time donation today for as little as $1.