This is the golden age of saying things are in the golden age, but this is, sincerely, the golden age of cheeseburgers and tater tots. It’s not because of ubiquity: Burgers and tots aren’t just everywhere (they are); it’s the golden age because Dallas chefs are handcrafting cheeseburgers and fried potatoes in the fires of our youth. Chef-driven versions of the glorious fast and junk food we ate as kids pop up in Dallas’ dive bars and cocktail joints every week. There are handcrafted pods like the potato barrels at IdleRye, which are served with onion dip. Mirador, one of Dallas’ swankiest downtown restaurants, has a tater tots dish topped with king crab for $29. You can add caviar for $70 if you’re in the mood for a death-row meal.

The best tater tots in Dallas, however, aren’t great because of expense or because they're drowning in easy-to-love ingredients like cheese and bacon. They’re great because they’re fun, crunchy, golden, thoughtful homages to the food of our youth. And they’re worth every penny. 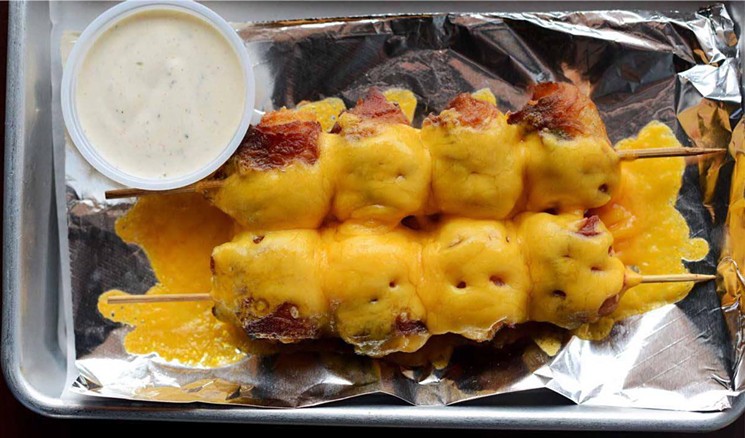 Blues Burgers has skewers of jalapeño- and bacon-wrapped tots.
Blues Burgers
The Bad Pennies at Blues Burgers
1820 W. Mockingbird Lane
It starts with slices of jalapeños and hickory-smoked bacon. Blues Burgers saddles each tot with a pepper sliver, then wraps the smoked bacon like a bandage around the tater tot. The restaurant skewers them, eight to an order, and then feathers cheddar over everything. A fiery salamander melts the cheese, and then the tots are dropped on a tray in front of you with a lounging pool of ranch. The fire and pickled acid of the jalapeños and the smoky bacon make them feel like a good meal. You won’t even need a burger (but get one anyway). This is a true Dallas appetizer. IdleRye's housemade tater tots are served with an oniony dipping sauce.
Nick Rallo
The tater tots at IdleRye
2826 Elm St.
The tots are, in part, an accident. They’re giant: hand-formed into a size somewhere in between shot glass and poster shipping tubes. Chef Ray Skradzinski starts with a potato hash shred. The restaurant sells about 20 to 30 orders per day, so cutting Yukon potatoes per order was the “bane of his existence.” He shaves Gruyère cheese right into the hash, dashing in nutmeg, cayenne and a pinch of salt. He lets that sit with some cornstarch, scoops the mixture and hand-forms them into mini barrel shapes. Then, to order, the barrels get a light coat of cornstarch and head into the deep fryer. A crisp shell forms. The size, smaller and more portable than a Hot Pocket, is the accidental part: Skradzinski had a more traditional tot size until a new hire accidentally used the wrong scooper, resulting in a few tots that looked like radiation mistakes from a Godzilla movie. They’re served with an onion dip, a concentrated blast of creaminess and onion flavor that induces quick blackouts. 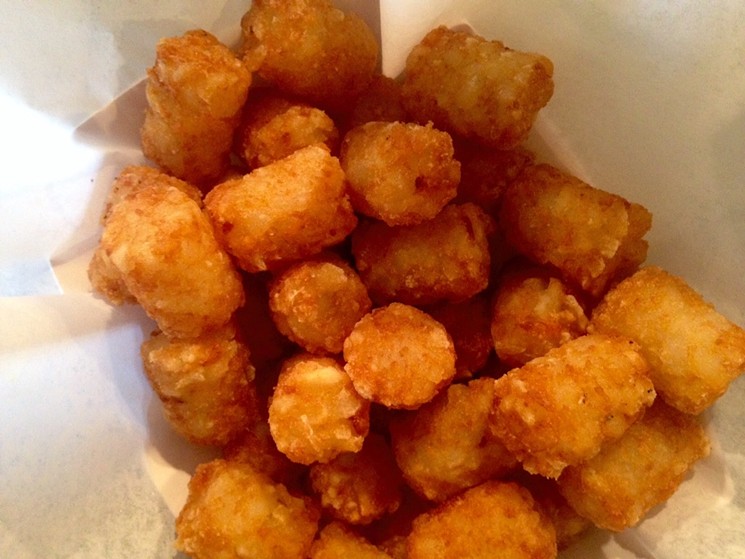 The last thing you see before the empty, cleaned wax paper at Maple and Motor.
Nick Rallo
The tater tots at Maple and Motor
4810 Maple Ave.
They’re not handmade tots or artisanal anything. Maple and Motor’s tots are the frozen kind, and they’ve never tasted better. They’re fried in the dark magic of an undisclosed oil. Pair them with a cold beer and hearty squirts of ketchup and mustard, and you’ll feel the golden crunch in the center of your spine. The best tots have a 360-degree bronze crunch, unlike those soggy, flabby tots you got in the cafeteria aisle. These tots are universally crunchy, satisfying every urge of fried potatoes you’ve ever had. They’re also served piping hot. They’re special. Easy Slider's tots are a damn fine way to start a meal.
Beth Rankin
The loaded tots at Easy Slider
2701 Main St.
An order of the loaded tater tots at Easy Slider will turn heads. They should arrive with a coronation; it’s like watching a movie star walk the floor. If Tom Cruise delivered these tots to your table, everyone would be staring at the tater tots and not the star of Cocktail. Easy Slider fries the tots to reach the right crispness, salts them and tosses everything on the flat grill. The cheese lends a sharpness and the smooth richness you get with fresh milk, easing you into the truckload of tots. Because this is the great state of Texas, there is housemade ranch dressing. A new development: Tuesday is Tot Tuesday now. At happy hour, you can grab a tray of loaded tots for $4. Green onions, finely grated cheddar and fontina cheese sauce cover tater tots in Deep Ellum's Hide.
Nick Rallo
The Dirty Tots at Hide
2816 Elm St.
If you’re tired of tater tots, turn away: These are the Olympic torch of tater tots. They burn and crackle with heat (medallions of pickled jalapeños) and are laced with a sharp and creamy fontina cheese sauce and shards of bacon. Share with a friend and a scotch. The tots arrive blanketed, tot to tot, with cheddar. The heat from the jalapeños meets rich, fried potato. A finely grated layer of sharp cheddar counters the rich fontina. These are tots worth falling for. High Fives has four versions of tater tots.
Nick Rallo
The Parmesan tots at High Fives
1804 McMillan Ave.
Truffle oil is usually a terrible, overused ingredient. The only application in which it seems to work is when it’s tossed with fried pods of tater tots, punctuated with lots of Parmesan. High Fives’ tots are flecked with Parmesan, bronzed and crunchy to the core. The musty, earthy qualities of the truffle oil waft in with this tray of tots at the little sandwich joint from chef Jeffrey Babb. Dip them in mustard or ketchup or nothing at all. You can make meal of them (they have multiple versions of tots, including “totchos,” tater tots and nachos combined into one beautiful thing). I like the simple, deeply savory Parmesan and truffle tots. They’ll remind you of a summer baseball game. A local egg drapes over the tots at Velvet Taco.
Velvet Taco
The crisp tots and local egg at Velvet Taco
3012 N. Henderson Ave.
One of the best orders at Velvet Taco isn’t a taco. It’s a heavy-as-a-bowling-ball tray of tater tots, topped with a farm, sunny-side up egg. Despite the nodes of goat cheese, melted cheddar and avocado crema, the tater tots are salty and crispy throughout. The egg has a jiggly yolk, running over the hot, salty pods when you slice it down the center. There's chili butter somewhere in there, too. Add Topo Chico for your health. Bonus: Velvet Taco is open nearly all night. You can get these tater tots right after the bar closes. Town Hearth knows how to amp up tater tots.
Kathy Tran
The Tots Du Jour at Town Hearth
1617 Market Center Blvd.
Everything you know about tater tots becomes irrelevant when you arrive at Town Hearth. For starters, an order of tater tots will cost you more than $20 with tax. Don’t panic; you’re getting your money’s worth. The joy of what’s on the tots rotates: You may find tots done Oscar, with béarnaise sauce and bolts of fresh, luxurious crabmeat. You may find the tots centered on a moat of French onion soup or inside an autographed apron of Mario Batali. OK, not the last one, but you get the idea. Whether you find an sunset-hued egg on top or a short rib, each one of these tater tots crunches. It's salty and fantastic.