The Finch is part of Milkshake Concepts hospitality group. The Finch
The new American restaurant, The Finch, will open Nov. 21 at Mockingbird Station, in the former home of Café Express. The 5,760-square-foot restaurant is a modern grill with an expansive raw bar that brings fresh seafood to landlocked Dallas.

The Finch is part of the Milkshake Concepts hospitality group, whose other endeavors include very popular concepts like Vidorra, Stirr, Citizen Dallas, Serious Pizza, Dirty Bones and Harper's.

“We’re thrilled to confirm the opening date for The Finch in time for the holidays,” says Imran Sheikh, CEO of Milkshake Concepts.

The regular menu will also be available on Thanksgiving for those who want to try oysters and other dishes. 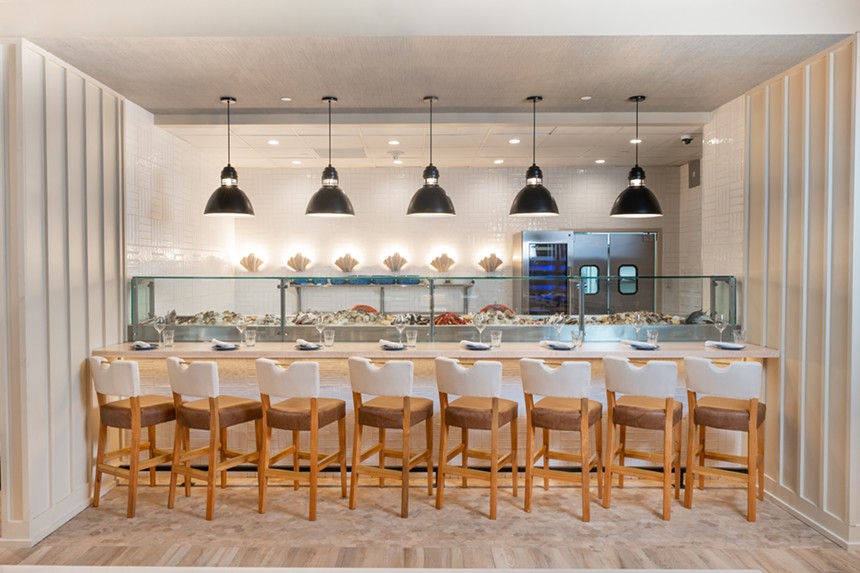 The raw bar is a centerpiece of this new spot.
The Finch
The raw bar is a highlight of the menu here. Guests can order oysters from different regions throughout North America, each with a different taste and texture. For example, Maine oysters are described as “clean and meaty,” whereas Prince Edward Island oysters are “briny and fresh.” To get a taste for a variety of seafood, the seafood platter includes oysters, crab dip, jumbo prawns and colossal crab claws, accompanied by crackers, cucumber mignonette, fresh horseradish, cocktail sauce and lemon wedges.

Customers who prefer their seafood cooked have plenty of choices as well. Crispy striped bass is served over parmesan risotto, with grilled asparagus, eggplant caponata and lemon butter. The blackened redfish tacos are served with a spicy remoulade, cabbage slaw, avocado crema and cilantro in a flour tortilla. The restaurant also prepares pizzas, burgers, sandwiches, steaks, soups and salads.

The Finch has partnered with White Rhino Coffee, which has served the North Texas area since 2007. Guests can order traditional White Rhino Coffee offerings, as well as the Finch Espresso Martini, which consists of a double shot of White Rhino espresso, vanilla vodka, Kahlua and Bailey’s.

Happy hour will be Monday through Friday from 3 p.m. to 6 p.m., with cocktails, wine by the glass, starters and oysters all at half price. For upscale dining on a budget, this sounds like the time to go.

5307 E. Mockingbird Lane, No. 150. Monday – Thursday, 11 a.m. – midnight; Friday, 11 a.m. – 1 a.m.; Saturday, 10 a.m. – 1 a.m.; Sunday, 10 a.m. –10 p.m.
KEEP THE DALLAS OBSERVER FREE... Since we started the Dallas Observer, it has been defined as the free, independent voice of Dallas, and we'd like to keep it that way. With local media under siege, it's more important than ever for us to rally support behind funding our local journalism. You can help by participating in our "I Support" program, allowing us to keep offering readers access to our incisive coverage of local news, food and culture with no paywalls.
Make a one-time donation today for as little as $1.