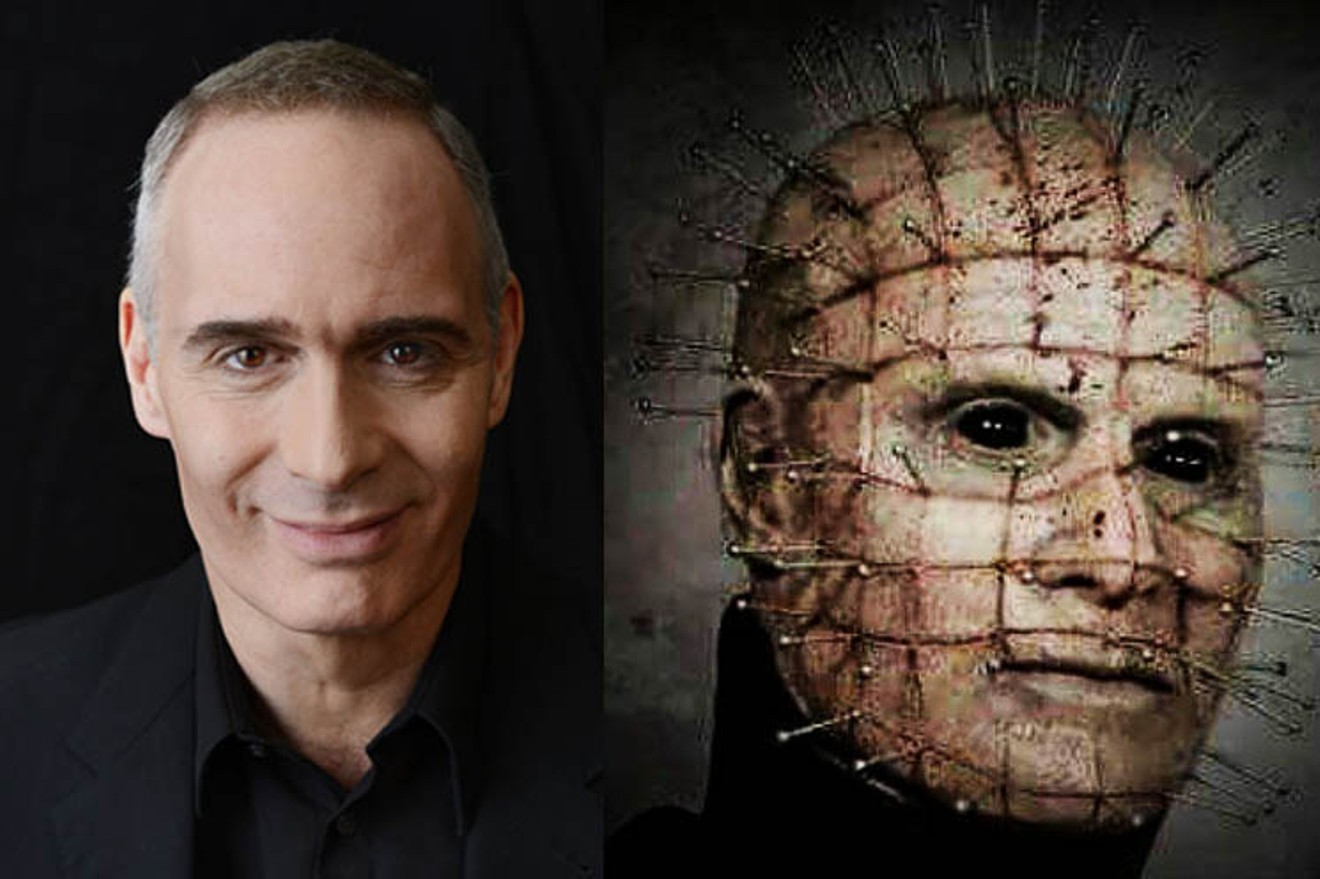 Actor Paul T. Taylor, left, says that playing the role of Pinhead in the upcoming film Hellraiser: Judgment was "the coolest thing that's ever happened to me in my life." Courtesy of Paul T. Taylor/Photo by David McGhee
Think of your favorite movie character. It doesn’t matter the genre or the franchise. Just think of the movie character you love the most and always wanted to become if money, opportunity and the basic laws of physics weren’t standing in your way. Now imagine getting a phone call from a major Hollywood movie studio that you’re going to be that character.

That’s what happened to actor Paul T. Taylor. He got the call for the role of the iconic horror villain Pinhead in the next Hellraiser movie, set for release sometime later this year.

The Dallas stage and screen actor scored the role of the dark priest Pinhead, created by acclaimed horror director Clive Barker, in the upcoming horror film Hellraiser: Judgment. He says the role is a lifelong dream from heaven — or technically, hell.

“[Pinhead] was always my favorite horror icon because he was the most twisted and intelligent in my mind,” Taylor says. “And I love the fetish wear, and it’s just wrong. He’s just so wrong. Chains on hooks? That’s so gruesome and grotesque. Clive Barker’s mind is just so twisted.”

Taylor says he auditioned for the role in Los Angeles and knows he “went in there and nailed it” because of his performance and the head casts the costume department made so they could build him a pin mask. During his visit, he visited a comic book store to bone up on the character with some Hellraiser comics.

“I opened the first page and there on the first page is a slightly balding priest a white collar and Pinhead is summoned, and there’s this convict [on death row] with a priest and Pinhead, and you think he’s going to destroy the convict he’s helping and instead [Pinhead] destroys the priest,” Taylor says. “I was like, ‘Oh my God, this is what’s wonderful about this.’ You can either believe in destiny or not.”

The dark priest Pinhead first appeared as a minor character in one of Barker’s novellas and made the jump to film in 1987’s Hellraiser. He was played by actor Doug Bradley, who pretty much stole the screen. Pinhead appeared in nine films and has become as beloved and infamous as Freddy Krueger, Jason Voorhees or the Xenomorph from the Alien movies.

Pinhead is one of the chief leaders of the extradimensional religious order known as the Cenobites who travel to Earth with ominous puzzle boxes to harvest the souls of humans. Taylor says it’s a perfect role for him.

“I have a vulnerability in my acting no matter what I do. It’s just there,” Taylor says. “I think an actor has to have that first of all, to be brave enough to be vulnerable. I cast a lot because of my vulnerability, even if it’s an evil character.”

Taylor as Pinhead on the poster for Hellraiser: Judgment
Courtesy of Paul T. Taylor/Dimension Films
Taylor filmed the movie last year in a studio in Oklahoma City “where the offices of hell were built.” Taylor says director Gary Tunnicliffe gave him a lot of room to play with the character so he could leave his own mark on its legacy.

“He’s British because I think Pinhead has to be British, and I do a good British accent so I’d just go all the way with it and that worked,” Taylor says. “While I was in L.A., Gary showed me a clip of Peter Cushing in Star Wars where he’s making Leia choose between destroying her planet or giving him the information he’s after, and he destroys the planet anyway and he just casually says, ‘You’re far too trusting,’ and Gary says, ‘There you are,’ because Cushing is so gentle in horror films in a cold way.”

Taylor’s practice for playing one of hell’s most powerful priests involved some dark preparation, he says.

“I had a couple of months to work on it before we shot and I stayed home as much as possible with very few lights on while I was learning the lines, and I live in South Oak Cliff in kind of a bad neighborhood, and I would just walk around like a badass basically,” he says. “[I knew] that I needed to honor the Pinhead that everyone loved already, the Doug Bradley Pinhead.”

The character holds a special place in the horror multiverse because his demeanor and tone are so unique. Taylor says he wanted to nail that in the 10th Hellraiser movie. Pinhead plays into the cold horror of the films by not acting over the top like Freddy Krueger or completely quiet and emotionless like Jason .

“It’s about the stillness,” Taylor says. “He’s already so that when he makes a move, it means something. He’s very economical and when he speaks, he’s so eloquent.”

The costume and makeup also helped sell his performance and not just on a visceral level, he says.

“It was extremely uncomfortable, but I didn’t care,” Taylor says. “Pinhead’s always in agony so he likes it. I feel like I was in character the whole time, and I don’t mean that in some sort of artistic, lofty way. I mean I maintained the demeanor the whole time because I had to. It was difficult to sit comfortably in between takes on my stool and the contacts were uncomfortable and the boots were huge and there was a lot of fog and irritants to breathe.”

“Pinhead’s always in agony so he likes it. I feel like I was in character the whole time."

Taylor says another challenge for a role like Pinhead was making sure he pleased the fans with his performance.

“It is a little daunting,” he says. “I’ve read some comments from the fans who are gonna hate me as Pinhead no matter what, but many of them are smart enough and cool enough to say, ‘I'm not gonna judge until I see Paul T. Taylor play Pinhead,’ and, ‘He’s not Doug Bradley but I’m gonna give him a chance.’”

The date for the straight-to-DVD release of Hellraiser: Judgment could be as early as later this month. There’s also talk about giving the movie a theatrical release around Halloween. Taylor says he can’t wait to show the fans what he’s done with the character. He’s encouraged by the reaction some of the cast and crew had on the set during filming.

“It’s gonna gross people out,” he says. “Hooks on chains might be mild at this point.”

Taylor says he’s excited to see what Pinhead has done for him and what he’s done for Pinhead.

“When it happens, when it does come out, it’s already changed my life to a certain extent,” he says. “I’ve gotten some other offers, and I’ve done another horror film, and I’m being taken more seriously for . It’s given me more clout, and that’s so wonderful and strange and unexpected. I have so much hope for it, and I’m just so glad that people who’ve seen it will think it’s a really good horror film.”