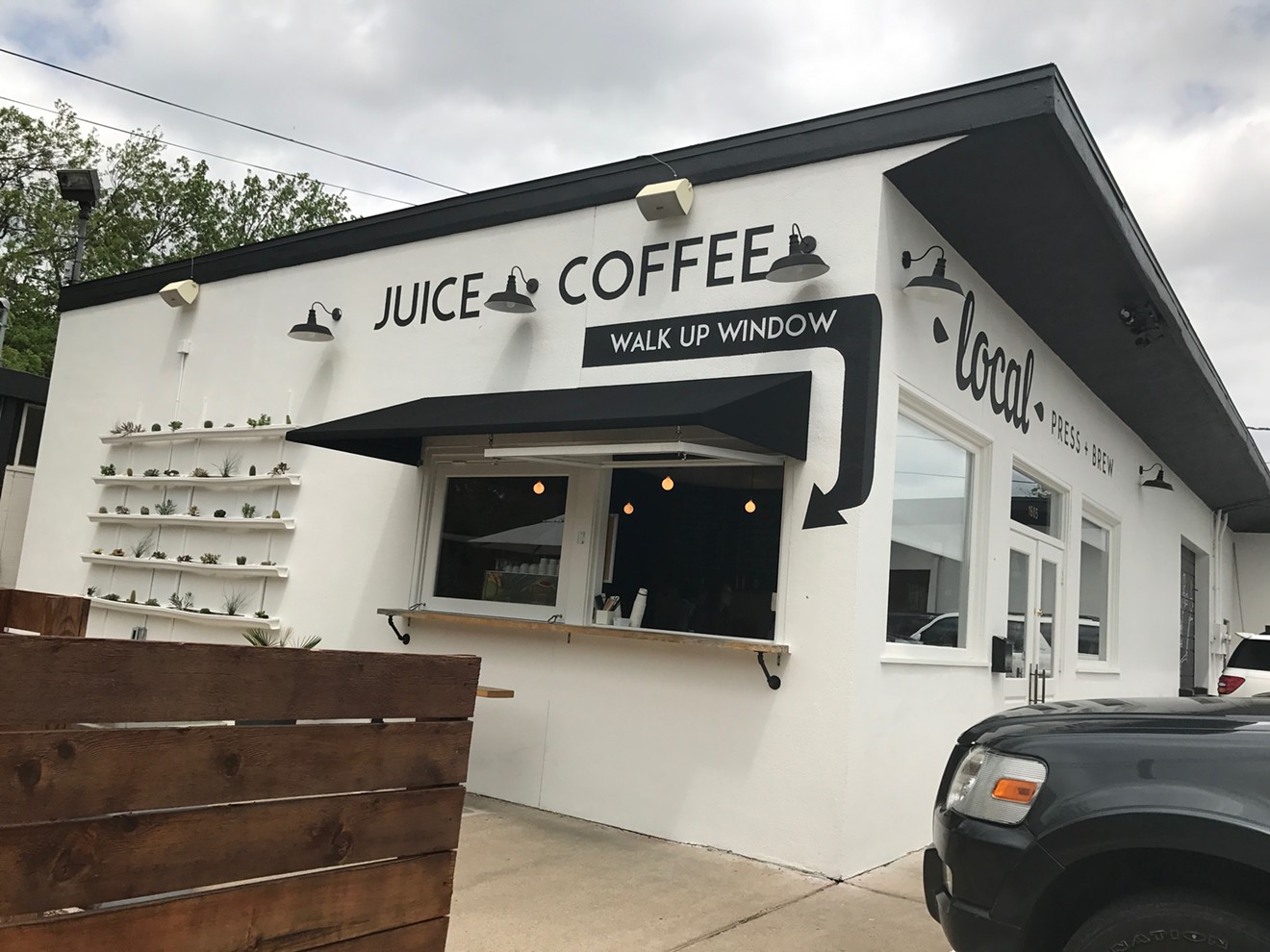 Local Press + Brew, with its bright, open space and a sweet patio connected to the cafe from an ordering window, quickly became an Oak Cliff gathering place after opening in 2015. Beth Rankin
On an overcast Friday afternoon, a tiny bird lost its way and found itself inside what is currently storage space next door to Local Press + Brew in Oak Cliff.

"Oh, a little birdy came in," Ben Johnson says, losing his train of thought. "Looks like a fledgling just learning to fly." Johnson, a tall, soft-spoken 40-something who in a former life was a police officer in Garland, tries to continue his conversation, but he can't help but watch the bird as it struggles to find its way back out. When it hits a window and falls to the floor, he jumps to his feet and gently picks it up, cradling the tiny creature in his hands.

Tiffany and Ben Johnson, owners of Local Press + Brew in Oak Cliff.
Christina Childress
"Hi, little guy," he says, his voice an octave higher. "Wanna meet him?" he asks, reaching out his arms. I eye the bird for a second before he takes it outside and opens his hands, watching for a moment as the bird flies off into the Oak Cliff sky.

Johnson wants to do good by Oak Cliff. In 2015, seeking to create a community space in the neighborhood, he and his wife and business partner, Tiffany Johnson, opened Local Press + Brew, a combination juice bar and coffee shop on Beckley Avenue. With six kids at home – one of whom is just over a month old – the Johnsons have a lot on their plate. But their plate is about to get much bigger, as they prepare to open two more businesses: Local Moto, a combination coffee shop, beer bar and vintage motorcycle repair shop in the same building as the cafe, and a second location of Local Press + Brew, slated to open this summer on Houston Street, right at the mouth of the Katy Trail. They're also expanding distribution of their cold-pressed juices, which are already available at several coffee shops around the city.

Ben and Tiffany Johnson aren't much like other Dallas restaurant owners. In fact, neither even worked in the restaurant industry before opening Local Press; he worked in law enforcement, and she is a photo producer. There were no developers, no shadowy team of investors, no goals for expansion; using their own money, they opened a business that embodies all of their biggest loves.

Tiffany's eye for light and design was integral in creating the cafe's cheerful modern interior, leading Local Press to become one of the most-Instagrammed cafes in Dallas. And soon, Ben's biggest hobby will become part of the Local business model. Next door, in the space that used to be Urban Acres, the Johnsons are preparing to open Local Moto, a vintage motorcycle repair shop that will serve as an extension of Local Press. Local Moto will sell motorcycle accessories, coffee and local beer, along with what Ben calls "grandpa beers," no-nonsense brews like Schlitz and Old Milwaukee.

In the space next door to Local Press + Brew, Ben and Tiffany Johnson are about to open Local Moto, a vintage motorcycle repair shop that will also sell coffee and beer and serve as an extension of their Oak Cliff cafe.
Beth Rankin
"The combination of the two concepts, the way in which we do business, is pretty much an extension of our marriage and our life," Ben says.

They source locally for almost everything in the cafe: coffee from Oak Cliff and Noble Coyote coffee roasters, milk from Mill-King dairy outside Waco. Their teas are made by Zakti, another Oak Cliff company, and the bread for their famous toasts are made by D's Sourdough, which sells at the Dallas Farmer's Market. The pastries come from Haute Sweets and Bisous Bisous, Glazed supplies the weekend doughnuts and even the space itself has local touches. Dallas artist Will Heron created the mural out front, and the wall of succulents on the patio is lovingly cared for by Nicole Harris, a Dallasite who does home and garden design. On the carefully curated shelves inside the shop, the Johnsons sell locally made goods, some of which are made by former Local Press baristas who grew their business while working at the coffee shop.


"The combination of the two concepts, the way in which we do business, is pretty much an extension of our marriage and our life."

"We feel like, from the very beginning, we've always kind of grown with these companies that are just like us," Ben says. "Small business should be connected in that way."

And they're growing, too. Local Moto is slated to open in June, and this summer, they'll open Local Press + Brew's second location in a high-rise apartment complex. The new cafe will be double the size of the flagship location and will entice Katy Trail-goers with coffee and fresh juice.

The Johnsons are also planning to open both an office and warehouse space in Oak Cliff, Ben says, and they're expanding wholesale distribution of their juices. Cold-pressed organic juice makes up about 60 percent of Local Press' revenue, Ben Johnson says, and he's hoping you'll soon be able to find their juices at more cafes around the city.
Beth Rankin
From the start, Local Press has tapped into the here and the now: Their matcha tea was a favorite among regulars long before matcha became the newest "it" drink, and they entered the health food market before it had swept so fervently across Dallas. Even their decor – the succulents, the white walls and ample light, the industrial touches and open-air vibe – feels fresh and current.

"We’re not trying to look for what is trendy in the moment," Ben says. "We didn’t create Local to run it for two years and sell it."

Neither Ben nor Tiffany saw themselves as restaurateurs, but life is funny that way.

"When I retired from law enforcement, Tiffany and I just wanted to do something that involved the local community, involved connecting with small business and basically ... a place for the neighborhood to gather," Ben says. "An outlet for our creativity."