Jimmy Kimmel Live sidekick Guillermo Rodriguez, left, takes a picture with Andy Cantu at Fair Park before his remote for Tuesday night's episode. Danny Gallagher
The great Hank Kingsley from The Larry Sanders Show once called being a late night host's sidekick "a dying art," but Guillermo Rodriguez, the parking lot attendant turned sidekick for ABC's Jimmy Kimmel Live, is bringing it back from the dead.

"The show, it's fun for me and it's great," Rodriguez says. "Jimmy is a great guy. He's a great boss. I'm blessed to have a job working for him."

Rodriguez has been on the show almost since its premiere in 2003. A few months into the late night show, former Mighty Mighty Bosstones singer and then-show announcer Dicky Barrett caught Rodriguez, who was then working as a parking lot attendant for the studio, sleeping in his car. Barrett told Kimmel about it and the host said, "We got to put this guy in the show," according to an interview with Rodriguez last year in People magazine.

Kimmel has taken his show from his homebase in Los Angeles to his original hometown of Brooklyn for a week of shows at the Brooklyn Academy of Music for three of the last six years. The show frequently sends Rodriguez across the country for remote segments that usually involve drinking and eating the local cuisine.

Rodriguez came to the State Fair of Texas on Tuesday to be one of the first to try some of the new foods that are finalists in the Big Tex Choice Awards. It's all part of his weeklong trip on the "Guillermobile," a large orange tour bus that has a huge picture of Rodriguez's face emblazoned on both sides.

"I get to meet a lot of people, I get to eat different types of food and everybody is so nice to me," Rodriguez says. "It's nice. It's great. I always gain weight on this trip."
Rodriguez started on the show as more of a correspondent and a co-sidekick to Kimmel's beloved Uncle Frank Potenza, a former New York City police officer known for his extreme generosity. As with Rodriguez, Kimmel made Potenza famous as he sent him to interview celebrities. Potenza became known as an affable personality who often gave people (including celebrities) cash right out of his pocket. He became so popular that when he died in 2011, The New York Times honored him with a featured obituary with a photo alongside his nephew.

"He was really a sweet guy," Rodriguez says of Potenza. "He was always making sure you had lunch, making sure you ate and that you drank water and had coffee. He used to take me out to eat and I was about to pay and he'd go [imitating Uncle Frank], "Guillermo, no, I got it. Don't worry. You have a family. I'm retired. Don't worry. I'll take care of it."

Now Rodriguez stands off to the side of the camera every night during Kimmel's show, still in the parking attendant uniform he wore before he became a 21st-century Larry "Bud" Melman, the lovable, cackling sidekick from NBC's Late Night With David Letterman. Kimmel religiously watched and recorded Letterman's show during his teenage years in Las Vegas.

Kimmel usually sends Rodriguez to do the remote segments that he doesn't want to do himself, like playing a scary game of soccer on the roof of the show's El Capitan Theater with Brazilian superstar soccer player Neymar Jr.; climbing to the very top of the Empire State Building in New York City; or riding the SkySlide, a clear, plexiglass slide that projects from the 70th floor of the U.S. Bank Tower in Los Angeles.

"It was the show's idea," Rodriguez says, referring to the SkySlide stunt. "They offered it to [Kimmel] and he said, 'Oh yeah, Guillermo would love to do that.' He likes to mess with me, but it's fun."

One of the show's other annual traditions is to send Rodriguez into the press pit on the other side of the red carpet at the Academy Awards. There, he's known to sneak in tequila to the guests and even a kiss with some famous women.

"I think my favorite thing I got to do was when I did the red carpet for the Oscars," Rodriguez says, "and I got to kiss Charlize Theron and Scarlett Johansson."

His most recent remote in Dallas was the third time he visited the city before Kimmel's Brooklyn shows. The first happened in 2018 when he got to sample the epic ribs at Lockhart Smokehouse. He returned the following year to take a taste test of Mariano’s Hacienda's menu.

Rodriguez says he had no idea what he'd be eating at the State Fair. A bit of fear crossed his eyes when we told him that some of the possible items might be something called the "Peanut Butter Paradise" or a deep-fried BLT sandwich.

"I think that's too much," he said with a laugh. "I gotta pace myself."

Rodriguez notes that it's worth gaining another pound of two on the road because he enjoys the celebrity the show affords him, especially "when some people see me, they tell me, 'You made my day.'"

"This is a blessing," Rodriguez says. "This is the American dream. I never thought I was going to be on TV but thanks to Jimmy and all the writers and everybody working at the show. It's just a blessing." 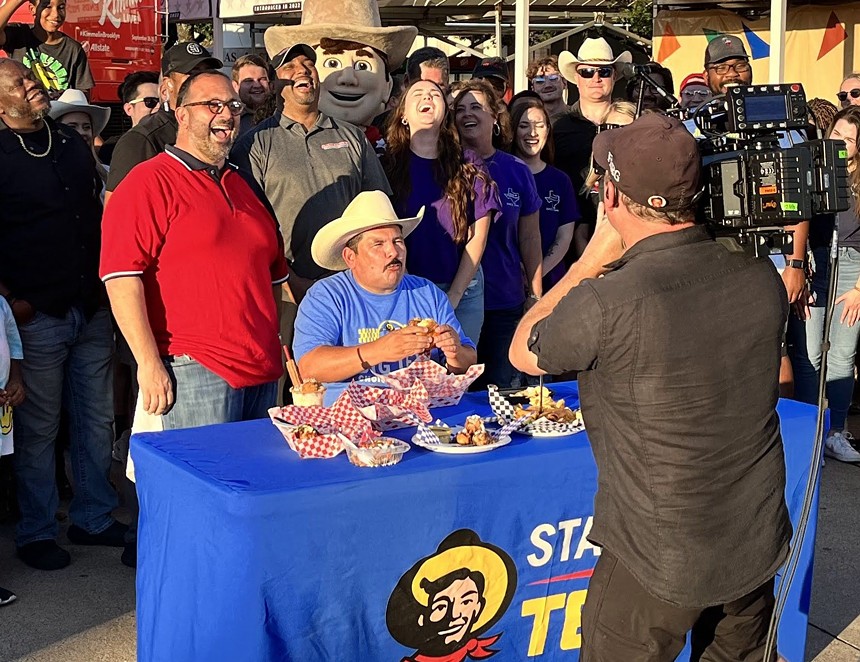 Jimmy Kimmel Live's Guillermo Rodriguez, seated, tries the Holy Biscuit invented by Isaac Russo, left, during a remote taping for the ABC late night talk show on Tuesday.
Danny Gallagher
KEEP THE DALLAS OBSERVER FREE... Since we started the Dallas Observer, it has been defined as the free, independent voice of Dallas, and we'd like to keep it that way. With local media under siege, it's more important than ever for us to rally support behind funding our local journalism. You can help by participating in our "I Support" program, allowing us to keep offering readers access to our incisive coverage of local news, food and culture with no paywalls.
Make a one-time donation today for as little as $1.