Watching Gad Elmaleh perform comedy is like watching someone take the stage for the first time — except, he’s good. A native of Morocco, Elmaleh later moved to Paris where he honed his comedy act and became known as the “Jerry Seinfeld of France.” His jokes are well constructed but he’s still learning how to adapt to American audiences, and you can see him soaking up and evaluating the reaction to each mannerism and punchline he delivers.

“I remember performing in a club in New York and I was worried about the language and there was this drunk guy, they call it a heckler, and I stopped,” Elmaleh says from his home in Los Angeles. “The real challenge would be the language, and I’ve been working on my English for two years now every single night. I was telling the guy, 'Please don’t do this because that’s another challenge I’m not ready for now. In French, I would kill you with two words.’”

Elmaleh is starting to become a familiar face in American comedy as well thanks to his touring shows; appearances on several late night talk shows including TBS’s Conan, CBS’s The Late Show with Stephen Colbert and Comedy Central’s The Daily Show; and a memorable, insightful feature on the second season of Seinfeld’s web series Comedians in Cars Getting Coffee. Elmaleh’s “Oh My Gad” tour will stop at the Texas Theatre this Friday. 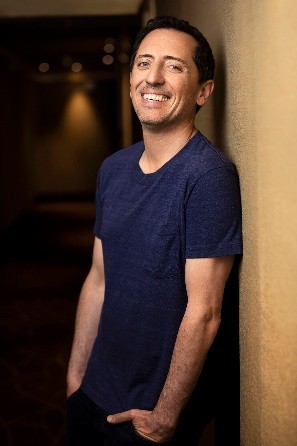 Comedian Gad Elmaleh, the “Jerry Seinfeld of France”
Courtesy of Personal Publicity
Elmaleh thrives in his unique observational style that explores the similarities between America and Europe as well as the differences.

“[What] I wrote here in the U.S. on things I’ve seen with my perspective as an outsider and a foreigner, they were much stronger than the bits I’ve worked out for years,” he says. “That was a surprise but a good surprise because it really made me work in that direction and I started really to write my material about my everyday life and my opinion and my perspective on America and culture.”

He says he finds the differences in our comedy fascinating and puzzling in some cases. For example, he’s observed, “American’s don’t like puns and plays on words which totally opposite in the comedy world to France or even Italy and Germany.

“If you’re able to do puns, you’re a great artist but if you do puns in the U.S., especially on the East Coast, you are a stupid, mediocre comedian,” Elmaleh says.

Elmaleh is also confused by the American concept of “clean” comedy.

“I’ve never understood this,” he says. “One day, I performed at the Comedy Cellar in New York City and I walk off stage and one of the comics said, ‘Oh, you’re a clean comic.’ It’s observational comedy, and I would say I’ve always done that even in Europe, but like 10 years ago, I was inspired by American stand-up comedians and one, in particular, is Jerry Seinfeld. After I met him, we became good friends and worked together, but I was watching his set and material and I felt very close to that observational work where you take really tiny, small details and make them a big problem. I’m really obsessed with that. It’s my comedy.”

Elmaleh also likes to add some physicality and storytelling to his comedy, a style that is more common in France. Aside from Seinfeld, another American comic Elmaleh admires is Sebastian whom he says he “really love[s] because he’s very physical and very efficient.”

“In the beginning, I wanted to be like an American and I wanted to be like those guys who go up there and stand up in front of a crowd and just do one hour, just joke, joke, joke, which is not the case in Europe,” he says. “You have to dance and talk and now I really want to make those two schools of comedy [merge] — very efficient and sharp stand-up and the very theatrical style of European/North African style of stand-up.”