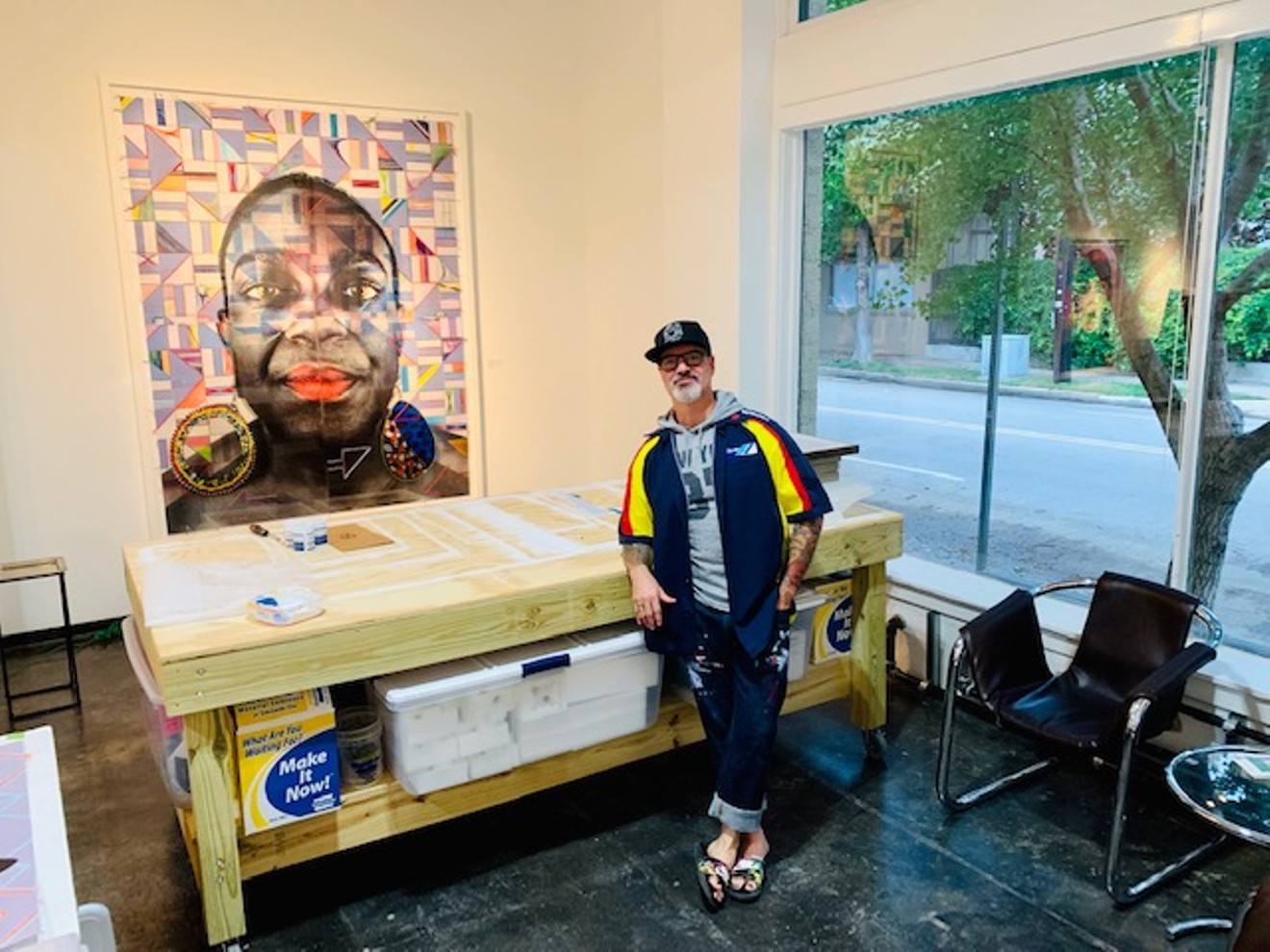 Mixed-media artist Joey Brock wants to use his art for good. Scott Tucker
It's been said it takes 20 years to become an overnight success, and Dallas-based visual artist Joey Brock just might prove that saying to be true. Known primarily for his use of color in oversized portraits, some of which are displayed in the windows of his studio in Fair Park, Brock has recently experienced a whirlwind of success locally and nationally.

The artist just returned from Los Angeles, after meeting with several clients and overseeing the recent completion of a large-scale digital installation project provided for the side of the Pendry Hotel on Sunset Boulevard. The three-image project features a portrait of Dallas musician Jess Garland, among others, and was commissioned after Brock had a successful one-off art show at West Elm Dallas in celebration of Pride month.

After 20 years of making art, and 10 years following the opening of Brock Studio Gallery, he has most recently focused on his portrait series, photographing everyone from famous Dallas musicians to people waiting in line at the grocery store. The artist specifically looks for subjects who are original and who are comfortable with themselves.

“My work celebrates diversity and self-love," Brock says. "I’m about lifting up people from everyday life and elevating them. I’m looking for people who are comfortable in their skin to be my subjects.”

Brock’s most recent collection can be defined as mixed media, as his portraits are often printed on non-traditional materials, highlighted by a myriad of various textiles including yarn, plastics and special papers. These elements are then woven or sewn into the works, sometimes creating complex geometrical lattices in reference to certain social constructs.

“It’s all about building empathy, as we have so many fractures and scars from our cultural divides,” he says. “The geometrical pattern in the work is a reference to quilting, which is part of American history, and right now the fabric of our country is torn, ripped and trying to heal.”

There have been autobiographical references in the artist’s work, too, as he once photographed himself nude for an installation piece, which required the viewer to peek into small lit boxes to experience both the work and the sensation of being a voyeur. This was part of a residency Brock completed in New York City, with the famous painter Michael David.

“It’s all about building empathy, as we have so many fractures and scars from our cultural divides. The geometrical pattern in the work is a reference to quilting, which is part of American history, and right now the fabric of our country is torn, ripped and trying to heal.” – Joey Brock


“He taught me how to strip things down into their most basic form and into the purpose of why it’s happening,” Brock says of his time with the artist. “After I showed my boxes, he liked it, and asked me the question, ‘Are you going to go home now and paint fluff, or are you going to keep it up?’”

It was this experience in New York that propelled Brock to completely submerge himself in both his subjects and his craft. Decorative abstract expressionism was on the chopping block as everything in his work was questioned and minimized to concise meaning. This lead Brock into his portrait series.

“The work became very autobiographical and deals with the traumas we’ve all faced," he says. "The portrait series features all kinds of people including straight, gay, transgender, bi-racial and everything in between. I like to make people feel comfortable when they come here, and for me it’s really a huge responsibility to make these right.”

Besides showings in Los Angeles and New York, Brock has had success at several Dallas art galleries over the years, at spaces such as RO2 Gallery and Craighead Green Gallery. On Oct. 15, Brock will have a solo exhibition called We Are, at the new and uber-hip Daisha Board Gallery in Trinity Groves. The artist will present 14 new mixed-media works of various sizes.

There is no end goal in Brock’s artistic practice except to keep exploring, expanding and raising the bar and consciousness on cultural issues. The artist wants to keep using his craft to unite and center people from all walks of life, embracing gender, race, sexuality and, most importantly, a shared humanity.

“Socially, art is really important, and we need to be using it as a platform for things that are happening right now to elevate our lives and raise consciousness,” he says. “In the end, it’s art that builds community.”
KEEP THE DALLAS OBSERVER FREE... Since we started the Dallas Observer, it has been defined as the free, independent voice of Dallas, and we'd like to keep it that way. With local media under siege, it's more important than ever for us to rally support behind funding our local journalism. You can help by participating in our "I Support" program, allowing us to keep offering readers access to our incisive coverage of local news, food and culture with no paywalls.
Make a one-time donation today for as little as $1.