An Ode to the Death of Shingle Mountain, 'Ms. Jackson Did Not Deserve This' 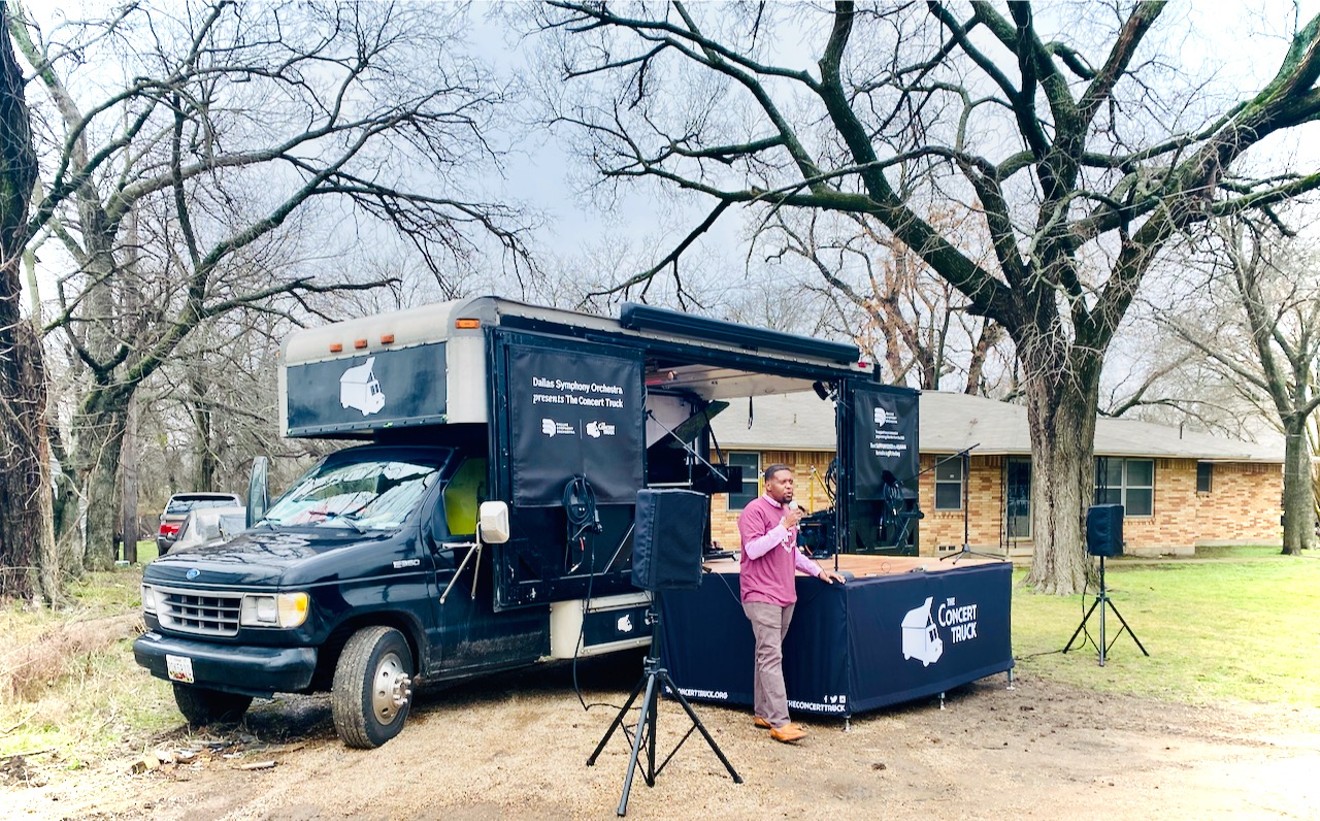 Quincy Roberts of Roberts Trucking, which was hired to remove shingle mountain, is a trained opera singer and coordinated this impromptu concert for Marsha Jackson. Lauren Drewes Daniels
It was a worthy and fitting musical ode to a woman who fought for years to get a six-story mountain of shingles removed from her backyard. The gesture was the work of a trucking company owner with a propensity for opera.

Crows cackled from the trees while Marsha Jackson and a few members of her family sat in a line of chairs on the road in front of her house. Nearby, a horse cut through a field, its rider, wearing a cowboy hat, navigating around mud and brush. The family dog mingled among a dozen or so reporters and photographers, asking nicely with a light paw for an ear scratch before finally finding a resting spot. An air gun not far away throbbed, no idea that a small symphony was set to begin on this Friday afternoon.

Jackson moved into this house 10 miles south of downtown along Interstate 45 more than 25 years ago. In 2018, a company adjacent to her property, Blue Star Recycling, began piling spent shingles behind her house. By day, the mound grew and grew until the unsightly health hazard towered above her house.

The fiberglass particles and dust from the tons of shingles drifted over Jackson’s house and life. In November, she told The Washington Post that a pulmonologist told her she needed to move, "'You’re going to have to move or they need to move those shingles, or you’ll eventually die. I hate to be so blunt, but that’s the truth,’" the doctor warned her, according to the article.

As the pile grew, she called the city of Dallas and a City Council member, but nothing was done. Robert Wilonsky of The Dallas Morning News covered the environmental hazard in December 2018. Soon after, the city filed a lawsuit against Blue Star Recycling, which piled the shingles.

As the Observer previously reported, the city sparred with the landowner, CCR Equity Holdings, over who would pay to relocate the shingles. Eventually, state District Judge Gena Slaughter gave Blue Star Recycling 90 days to move it, but nothing happened. The judge held both Blue Star and CCR Equity, which owns the land the shingles rest on, in contempt of court and ordered them to pay $1,000 for each of the 90 days.

Jackson has since filed a federal lawsuit against both companies and the city of Dallas, the latter for its complacency.

This past summer, the city finally allocated money from the budget to pay to clean the site, and in September, City Council member Omar Narvaez, chair of the Environmental and Sustainability Committee, announced that the city was taking bids from contractors.

A concert for one: Marsha Jackson. No other guests were invited to the concert.
Lauren Drewes Daniels
Roberts Trucking was awarded the job and in December of last year began hauling away 139,000 tons of shingles from the site by working 12 hours a day. Just before the winter storm hit North Texas in mid-February, the last truckload of shingle mountain was removed. The city is now required to perform environmental testing on the site.

Quincy Roberts, president of Roberts Trucking, isn’t your typical trucking company guy. A graduate of Booker T. Washington High School of the Performing and Visual Arts, he studied vocal performance at Indiana University, one of the top opera schools in the country. Roberts has traveled the country with symphonies and operas. He’s also currently a member of the Dallas Symphony Orchestra’s executive board.

This past Friday, with the mountain gone, he asked Jackson for one more hour of her time on account of the toxic mess that was in her backyard. Roberts' close friend and world-renowned opera tenor Lawrence Brownlee was to perform for Jackson in her front yard using the Dallas Symphony Orchestra’s Concert Truck as the stage.

“I’m from this neighborhood,” Roberts told the crowd, “so when I found out about shingle mountain and Ms. Marsha’s story, it was something that was personal to me. And from the beginning, I wanted to clean this up for this community because this is my community and Ms. Jackson did not deserve this.”

In addition to a performance from Brownlee, another Booker T. graduate, Charles McCampbell, played the gospel tune “Total Praise” on piano. Following him were two violinists from the DSO. Concert pianists Susan Zhang and Nick Luby, who created the symphony truck, performed next. Local composer and jazz musician Shaun Martin also played piano for Ms. Jackson.

“We’ve been waiting for this day and it’s finally here," Jackson said Friday, wiping away tears. "It’s finally here.”
KEEP THE DALLAS OBSERVER FREE... Since we started the Dallas Observer, it has been defined as the free, independent voice of Dallas, and we'd like to keep it that way. With local media under siege, it's more important than ever for us to rally support behind funding our local journalism. You can help by participating in our "I Support" program, allowing us to keep offering readers access to our incisive coverage of local news, food and culture with no paywalls.
Make a one-time donation today for as little as $1.