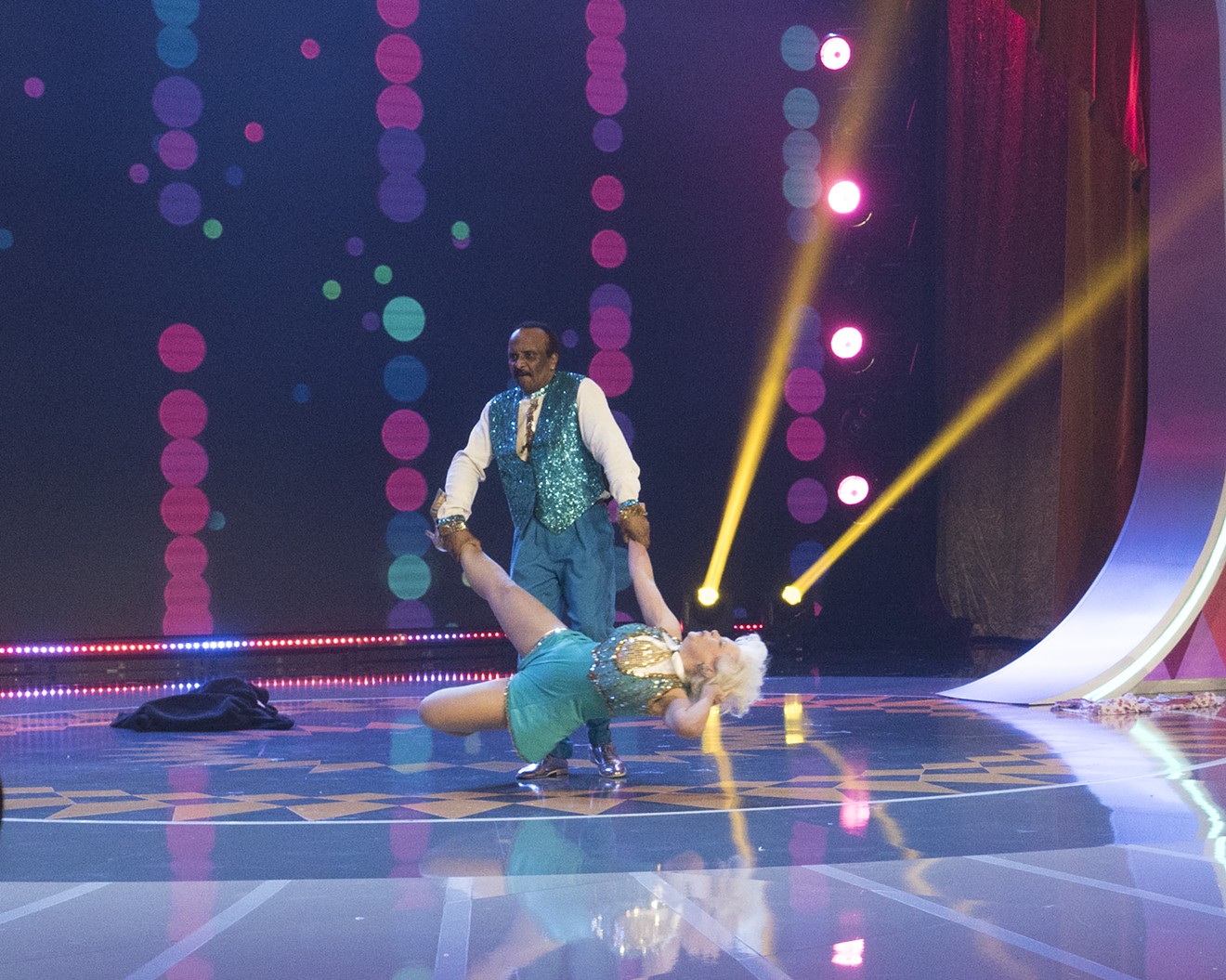 Michael and Carol Garland, who are also known as the dancing duo Curly and Flash, compete on an episode of ABC's reboot of the talent game show The Gong Show. Their episode airs at 8 p.m. Thursday on WFAA Channel 8. ABC/Richard Carthwright
Michael and Carol Garland may be in their 70s, but they've spent most of their years on dance floors, and something as meaningless as age hasn't stopped them.

"If you put us behind the silhouette, people think we're in our teens," Michael says. "We do some crazy routines that even the kids won't do."

The Bedford couple, who also call themselves "Curly and Flash: A Blast from the Past," makes for an impressive dancing duo. They've turned more than a few heads whether dancing at a club for fun, competing in dance competitions or working on TV shows. Now they've done the most daring thing a dancer can do on television. They competed on the wacky and notoriously cruel talent game show The Gong Show that ABC rebooted with host Tommy Maitland, aka Mike Myers in heavy latex makeup. Their episode will air at 8 p.m. Thursday.

The two have been dancing almost as long as they've been a couple. Michael, a Dallas native son of jazz great Red Garland, who played piano for Miles Davis, moved to Los Angeles to pursue his dancing career and landed appearances on Dick Clark's American Bandstand and Don Cornelius's Soul Train and choreography jobs on shows like Dallas. Carol, a native of Temple, says she danced in her teens "but I didn't get serious about it until I was in my 20s."

Eventually, Michael taught her some moves and how to do dances like the jitterbug, the Lindy hop and four different kinds of salsa. The two have been wowing crowds ever since with their flips, dips and spins. They've coached choreography and dance instruction all over the Dallas area. Among their students are David Joyner, who played the big purple dinosaur Barney in the 1990s, and 19 Dallas Cowboys Cheerleaders. They also still make TV appearances together in commercials for Winstar Casino and Alaska Airlines and in the opening credit sequence for the new Fox sitcom The Cool Kids, starring Vicki Lawrence, David Alan Grier Martin Mull.

"If you put us behind the silhouette, people think we're in our teens. We do some crazy routines that even the kids won't do." – Michael Garland

They are still known for clearing dance floors when they go out for a date, like a memorable visit to Gloria's in Addison about a year ago, Michael says.

"There was this group of girls there, and they were just making fun of us, right to our face," he says. "So when the song changed and people were coming off the floor, I picked [Carol] up and people were screaming when I did the overhead lift. Everybody from the top floor heard the screaming, and the next thing I know, no one was on the top floor. They were looking over the rails."

Their big secret for being able to stay so limber on the dance floor actually isn't that big a secret, Carol says.

"I pray every day. I drink a lot of water, and I eat as healthy as I can," she says. "I may go off every now and then, but I like to stay on it so I can keep up with Michael ."

Carol says they live to see those kinds of reactions whether they are going out for a night of dancing or competing on national television.

"Michael is 72 and I'm 73, but we don't think about that," Carol says. "Our age is just a number. It's how you feel and respond. We enjoy what we do. It's rewarding to see people's comments and faces. That's priceless."


One of those reactions earned them a spot on The Gong Show. Michael says a producer found them on YouTube in a series of videos called "Best Senior Citizen Dancers Ever" showcasing their impressive dance routines and invited them to appear on the show. They flew out to Los Angeles last May and filmed their performance in front of a packed studio audience. The celebrity guest judges were comedian Natasha Leggero, actor Chris Sullivan and Dallas Mavericks owner Mark Cuban.

The Gong Show may be known by viewers for being heavy on some of the worse acts, but Carol says everyone who worked on the show made them feel welcome during their visit to the set.

Of course, they aren't allowed to reveal what scores the judges gave and whether they took home the grand prize of $2,000. All they can really say about their routine was that they gave it their best show.

"It was just like any other routine," Michael says. "It's just like walking to the store. We've done it so many times."
KEEP THE DALLAS OBSERVER FREE... Since we started the Dallas Observer, it has been defined as the free, independent voice of Dallas, and we'd like to keep it that way. With local media under siege, it's more important than ever for us to rally support behind funding our local journalism. You can help by participating in our "I Support" program, allowing us to keep offering readers access to our incisive coverage of local news, food and culture with no paywalls.
Make a one-time donation today for as little as $1.