25 Years Ago, Barney Died During the Macy's Thanksgiving Day Parade 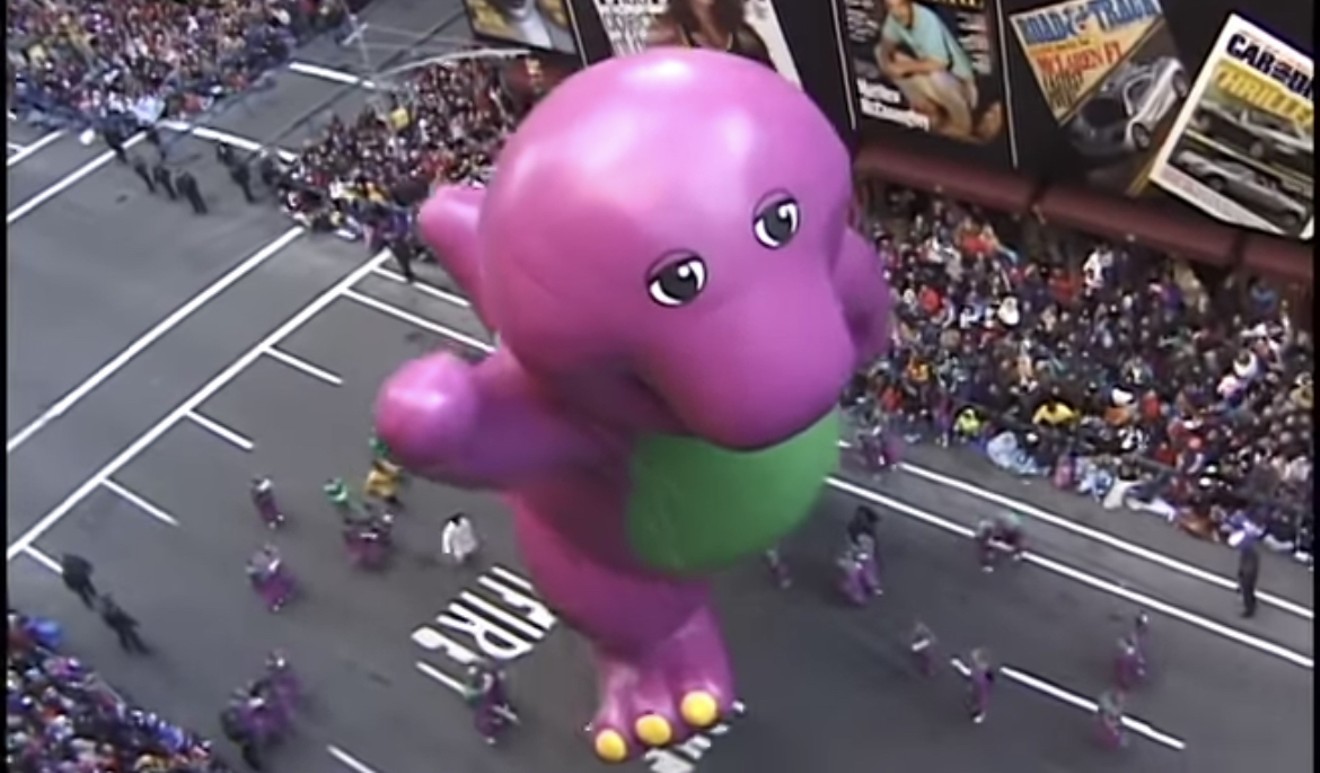 A giant balloon version of Barney the Dinosaur collapsed during the Macy's Thanksgiving Day Parade in 1997. Screenshot from YouTube
The level of vitriol and hatred that humanity has leveled toward Barney the Dinosaur is unprecedented —especially when you consider that he's designed to bring joy and teach inclusiveness and love to children. It's staggering. People hate on Barney in volumes usually reserved for dictators, bedbugs and Oasis tribute acts.

Hating on Barney became a national pastime during the dinosaur's heyday. The recent Peacock docu-series I Love You, You Hate Me chronicled the fever pitch of Barney loathing that included "violent and explicit" death threats against actor Bob West, who provided Barney's voice on the Barney and Friends TV series.

So you can probably imagine the responses when Barney's balloon collapsed on top of its wranglers and even some spectators during the 1997 Macy's Thanksgiving Day parade.  The parade was a particularly windy one, according to The New York Times. The wind speed topped out at 43 mph, sending balloons barreling between buildings as handlers tried to control them along the parade route.

The Barney balloon crapped out at 51st Street after it had suffered a tear somewhere along the route. The balloon started to lose air and eventually landed on the heads of its crew and some of the nearby crowd. Police officers tried to stab Barney with knives, presumably to bring him down.

One woman who was in the crowd told the newspaper, "Barney attacked us." Lucky for Barney, "Stand Your Ground" laws weren't a thing yet in 1997.

The Barney balloon was one of many inflated avatars that collapsed during the windy Thanksgiving Day tradition in New York City. The accident involving Barney's blowout stood out because of all the havoc it caused to the people and property underneath the pudgy purple blob. The wind also caused balloons of The Cat in the Hat, The Pink Panther and the Nestle Quik Bunny to float amok, forcing officials to extract them from the parade. The Cat in the Hat balloon hit a lamppost at the corner of 72nd Street and Central Park West and snapped a metal arm off above some spectators. Two people had to be rushed to nearby hospitals for serious head injuries.

The multiple stab wounds, however, did not keep the lovable dino down for good. Barney's balloon returned to the Macy's Thanksgiving Day Parade in 2004 along with his sister Baby Bop. The balloon was more tightly restrained this time to prevent it from veering off course, and somehow the crowd and nearby police resisted the urge to go after Barney with a giant knife Jason Voorhees-style.

The 1997 parade was marred by so many accidents that then-New York City Mayor Rudy Giuliani publicly vowed to investigate the parade's safety protocols and "find out what happened." Years later, an even more colorful and over-inflated ego would bring Giuliani's public image down even lower. Irony — what a stinker.
KEEP THE DALLAS OBSERVER FREE... Since we started the Dallas Observer, it has been defined as the free, independent voice of Dallas, and we'd like to keep it that way. With local media under siege, it's more important than ever for us to rally support behind funding our local journalism. You can help by participating in our "I Support" program, allowing us to keep offering readers access to our incisive coverage of local news, food and culture with no paywalls.
Make a one-time donation today for as little as $1.