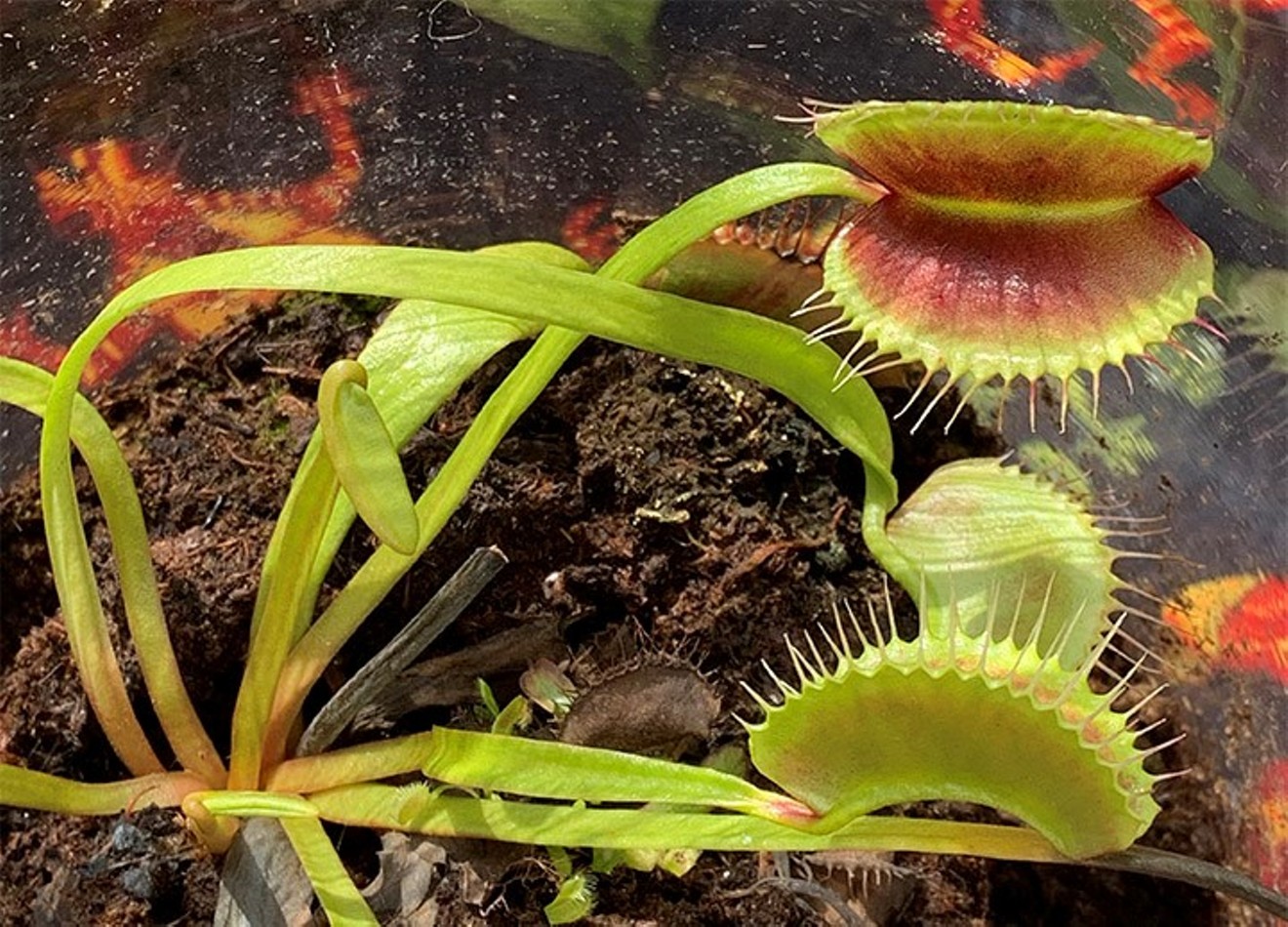 "I just realized these were horribly underappreciated plants," Riddell says. "Once people got past the idea of 'Well, they're carnivorous, so what?' they see they have interesting habits that are also pieces of arts and people should enjoy them."

Riddell bills his collection of carnivores as "pretty much Dallas' only carnivorous plant gallery," that he shows in appointment-only tours and at various plant and oddity shows throughout the year. The name comes from the John Wyndham horror novel The Day of the Triffids about a killer alien plant species that terrorizes humanity, but Riddell notes on his website that, "No, the Triffid Ranch doesn’t actually sell triffids. We also don’t offer Audrey IIs, vargas, Krynoids, Vervoids, Delvians, Vegetons, Whomping Willows or Slaver sunflowers."

Instead, Riddell says he houses around 100 different species of carnivorous plants inside and outdoors with 20 of them on public display.

"Most of what I am now carrying are ones more intended for beginners," Riddell says. "It's not fair to sell a beginner [a plant] that may die in a couple of weeks because they don't know how to take care of it."

He became fascinated with these insect eating plants that could harness their shape and beauty to trap prey and started amassing his own collection while learning how to properly care for them. Riddell says there are around 800-1,200 carnivorous plant species in the world and new species are being discovered every day.

"Right now, there is more research going on into carnivorous plants than when Charles Darwin was alive," he says, "everything from radio isotope tracking to DNA analysis to ultraviolet infrared studies."

Carnivorous plants are also good at reaching enthusiasts outside of botanical circles. Riddell says he regularly brings his collection to the Texas Frightmare Weekend horror festival because it attracts so much attention. He even caught the eye of some notable names who became regular visitors to his attraction, such as director Clive Barker of Hellraiser fame and filmmaker George A. Romero, who passed away in 2017.

"I miss him horribly," Riddell says of Romero. "He was a great guy to talk to, and he would always ask really interesting questions about the plants."

Riddell is hoping to raise awareness about efforts to conserve these unique species under the threat of climate change.

"There's quite a bit of risk," he says. "The Australian plants risk being wiped out because of rising water levels. Even with Venus fly traps, they're available in garden centers because of propagation techniques but in the wild they are declared endangered because of habitat loss and poaching."

The challenge of preserving them consists of giving them the proper care they need to survive and thrive, and motivating people to take action to protect the plants. Not everyone purchases the plants with the intention of cherishing them.

Riddell says he hopes that places like the Texas Triffid Ranch will spark an interest and inspire people to do more to protect the world's ecosystems for all types of plant life.

"They want to learn," Riddell says. "They want to go to ethical growers who aren't collecting from the wild. They want to preserve native populations so their habitat doesn't get turned into a KFC. They want to keep them going."
KEEP THE DALLAS OBSERVER FREE... Since we started the Dallas Observer, it has been defined as the free, independent voice of Dallas, and we'd like to keep it that way. With local media under siege, it's more important than ever for us to rally support behind funding our local journalism. You can help by participating in our "I Support" program, allowing us to keep offering readers access to our incisive coverage of local news, food and culture with no paywalls.
Make a one-time donation today for as little as $1.