What better way to see the best Dallas lights than in a bus made of lights? Courtesy of I See Dallas
There’s no denying this time of year has a special magic. But when your littles are too old to sit on Santa’s lap, it might be a bit harder to get them into that holiday spirit. That's why we’ve curated the perfect mix of teen-approved adventures to help even the Scroogiest offspring get super excited for the holidays.

CarBaret Presents Gremlins!
Dec. 10
640 N. Interurban St., Richardson
Created to give film fans something to do during the depths of COVID, Reid Robinson’s drive-thru series of CarBaret screenings is still going strong two years later, showing everyone’s favorite alternative Christmas film, Gremlins, outside of Four Bullets Brewery. If you like bundling up with a blanket, bring your chairs and sit outside, or cling to your car's heater. The night will also include a (kid-friendly) performance of “Gremlins burlesque” with Vivienne Vermouth starting at 8 p.m. DJ Jams Wallace will be spinning a “1984 megamix” of hits, and families are encouraged to bring their leashed gremlins along. They’ll also have plenty of pups who would love to join your tribe available for adoption on-site.

Wreck the Halls
Dec. 16 and Dec. 17
701 Taylor Drive, Plano
If the darker side of Christmas is your teen's jam, Dark Hour haunted house in Plano can add some scares to their visions of sugarplums with Wreck the Halls. Dark Hour director Alan Hopps is super passionate about monsters, so he's sourced a fantastical gallery of holiday-themed horrors, including Sugarplum fairies, twisted toymakers and murderous snowmen.
click to enlarge 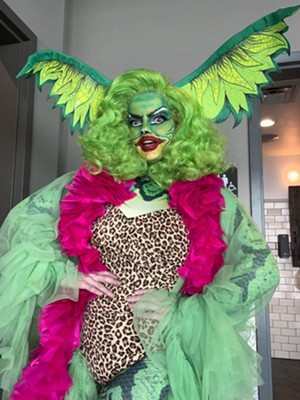 Don't pour water on her. Bring your own gremlins to CarBaret on Dec. 10.
Vivienne Vermouth

"I think monsters are an underutilized tool," he says. "There's a whole class of nursery bogeys that we've made to keep us safe, and we should carry those traditions on. Santa has a habit of hanging with a really bad crowd, so we have all kinds of winter monsters like Bellsnickles and Schnableperchten, who have giant bird heads and carry around giant scissors. If you're bad, they cut your insides out."

That's one way to get 'em to do their homework! Because it wouldn't be the holidays without Santa's evil BFF, Hopps (who happens to be the founder of North Texas' Krampus Society) has also arranged a Krampus photo op and toy drive from 1 p.m. to 4 p.m. on Dec. 11. The free event benefits Toys for Tots and will include plenty of Christmas creeps milling around to keep things festive.

Electric Lizzyland
Dec. 17, end date TBD
Newell Street, Hollywood Heights
We love it when someone gets obsessed and stays obsessed with the holidays. Liz Simmons has been transforming her East Dallas home into an annual “Electric Lizzyland” of lights since the late 1990s. What started with a collection of 800 mini lights and a papier mache polar bear has evolved over the years into too many sparkling accents for Simmons to count.

“I just kind of do whatever pops in my head,” she says of the biannual installation. “I have a lot of blow molds; I make scenes in every window. I have this thing I call the Christmas tunnel, and my whole home is covered in plywood panels that are painted and glittered. Every year it’s been expanding — it always has to be bigger and better.”

Because unloading all that stuff takes forever, Simmons alternates between transforming her home for Halloween and Christmas. Currently hot gluing her heart out, she plans the big reveal of this year’s décor on Dec. 17.

Electric Lizzyland is the best home light show in Dallas.
Liz Simmons
I See Dallas Holiday Tour
Through Dec. 23
Lakewood Growler, 6448 E. Mockingbird Lane
If driving a complaining crew around town to peep lights isn't your cup of tea, why not outsource the experience to I See Dallas? Cari Weinberg and her husband, Mark Roberts, transform an old ten-seater school bus into a light-adorned party vehicle each year to view the best and brightest mansions in Highland Park and University Park.

Patrons aged 8 and up can meet in the parking lot at the Lakewood Growler to board the bus for the nearly two-hour tour, which is guaranteed to pop by creative and original displays of the Christmas spirit as the Icicle House, Rocket Ship Santa and the blow mold Santa extravaganza known as Wayne's World.

Radiance! & Frozen
Through Dec. 31
Riders Field, 7300 Roughriders Trail, Frisco
and 2251 Mineral Wells Highway, Weatherford
Brought to you by the same folks who do Fright’n Lights, Radiance! has plenty of rides and attractions to keep things lively. Ride a bucking reindeer, ice skate under the stars, tube down a snowy shoot or take in all those (so many!) flashing LEDs. There's even real imported snow, so winter-deprived teens can practice their snowball skills or build a snowman. Trigger alert: you will hear “Let it Go.” Multiple times.

Enchant Dallas
Through Jan. 1
Fair Park, 1438 Coliseum Drive
Does the teen girl in your crew stan a Hallmark meet-cute movie? Enchant is a surefire way to make her holiday dreams come true. The Hallmark Channel has taken over Fair Park for the second year in a row with an eye-popping light maze billed as the “world’s largest,” complete with lots of Insta ops along the way. There’s a tent devoted to cocktails and Hallmark-branded wine (who knew?) for stressed-out moms, plus one filled with activities for smaller kids. You can even get classic State Fair snacks if you still crave a corn dog in December.
click to enlarge

Six Flags has performances and s'mores this Christmas.
Courtesy of Six Flags

Holiday in the Park
Through Jan. 1
2201 E. Road to Six Flags St., Arlington
Prefer your light show with some added thrills? Six Flags' annual Holiday in the Park layers on the s'mores, crafts and caroling to the standard array of thrill rides and shows. If your brood ranges in ages and tastes, this is the Christmas experience with a little something for everyone, from mean teens to little kids who still believe in Santa.

The Light Park
Through Jan. 1
1800 E. Lamar Blvd., Arlington
If your spawn recently got a driver's license, there's no better place to practice a hairpin turn than Arlington's drive-through Light Park. A great holiday solution if you're not ready to bump up against massive crowds of people, your baby driver can roll on with a carful of revelers, order some popcorn and tool through a tightly arranged maze of lights. Timed to go with a tuned-in soundtrack on your radio, the ride is mercifully Mariah-free. And since you're already in Arlington, why not pop by the ultra-campy Campo Verde Tex Mex restaurant on Pioneer Parkway when you're done? The 40-year-old establishment has over 500,000 dazzling lights, 55 Christmas trees and a 260-foot train track surrounding the entire space. Waiting time to get a taco can be up to two hours, so go early in the evening or plan a visit after the holidays slow down — the lights will stay up until March.

Snowday
Through Jan. 8
The Galleria 13350 Dallas Parkway, No. 1020
Whatever the weather, you're always walking through a winter wonderland at Snowday in the Galleria. This ultra-adorbs immersive experience lets visitors stroll through an old-timey Elven alley, dance on the ceiling in an upside-down living room or strike a pose inside a snow globe. Visitors get a wristband they can scan at photo ops, and pictures are sent via a link at the end of your tour. That way, Dad can finally be in the shot instead of always being stuck behind the camera.
click to enlarge Kids these days just seem to bark at their parents. Cheer them up at The Light Park.
Courtesy of The Light Park
KEEP THE DALLAS OBSERVER FREE... Since we started the Dallas Observer, it has been defined as the free, independent voice of Dallas, and we'd like to keep it that way. With local media under siege, it's more important than ever for us to rally support behind funding our local journalism. You can help by participating in our "I Support" program, allowing us to keep offering readers access to our incisive coverage of local news, food and culture with no paywalls.
Make a one-time donation today for as little as $1.