This room in Arlington Van Gogh looks familiar. Paige Weaver
You've probably heard of the immersive Van Gogh exhibition currently showing in Dallas. Billboards, display ads and social media posts about the event have assaulted Dallasites for months . But did you realize there aretwo, competing exhibitions with nearly identical names? The competing exhibitions have been confusing ticket buyers for months.

Van Gogh the Immersive Experience Dallas is actually in Arlington, at the Choctaw Stadium, formerly Globe Life Park (1000 Ball Park Way), while The Immersive Van Gogh Exhibit Dallas is indeed in Dallas proper, housed at the former Dallas Masonic Temple (at 507 S. Harwood St.) in the East Quarter of downtown. For clarity’s sake, we will refer to them as Arlington Van Gogh and Dallas Van Gogh.
click to enlarge

A room at Arlington Van Gogh.
Paige Weaver
We attended both exhibitions so you don’t have to, hopefully making your decision on which to visit a little bit easier ... assuming you don’t get them confused and purchase tickets to the other one.

Outside signage at Arlington Van Gogh is sparse. Entry is at the Diamond Club entrance of the stadium, with only a window cling on the door and two signs surrounding it.
click to enlarge The Dallas Van Gogh exhibition has much better curb appeal. The building itself is impressive and the signage is eye-catching — vinyl clings on the stairs, there are huge banners on the building and enormous vases of sunflowers. You can’t miss it.

Arlington Van Gogh begins with a museum gallery of sorts, with reproductions of Van Gogh’s most famous paintings and educational panels that cover important moments in the artist's life, some of which are touched upon during the immersive portion. There's also a life-size recreation of Van Gogh’s bedroom, based on his three Arles bedroom paintings.

Dallas Van Gogh instead starts with a bar, offering beverages, alcohol and snacks, which you can take into the immersive exhibition. Arlington Van Gogh does not allow food or drinks.
click to enlarge


The smaller room opens into a large, expansive two-story room. Circles are projected onto the floor of the larger room, signaling social distancing. In this larger room, you can sit on the floor or ascend to a second floor balcony. From the large room, you walk into yet another smaller room, this one with translucent pyramids at the center, which cast an abstract projection.
click to enlarge 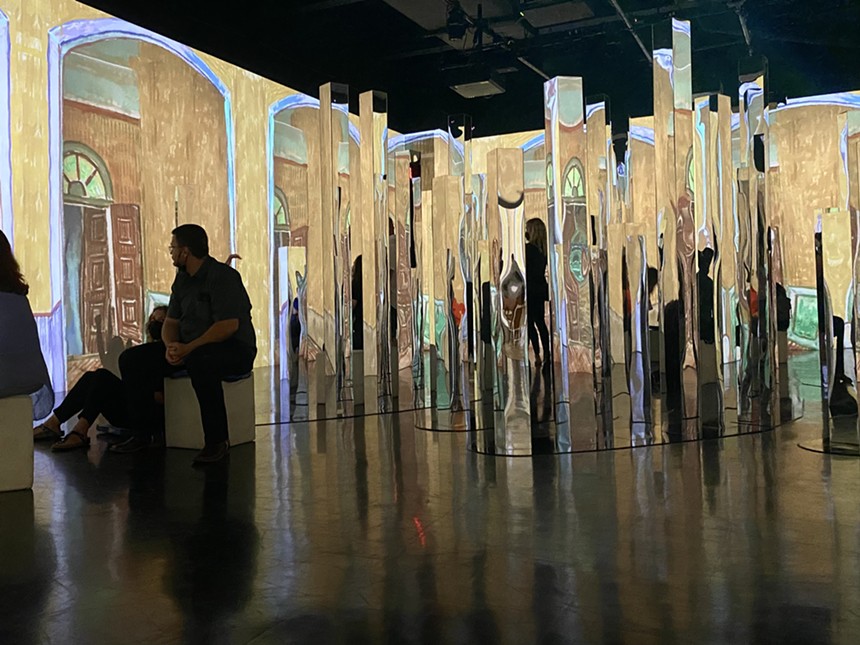 Arlington Van Gogh has a single, rectangular-shaped room for its immersive experience. You enter and exit through one entrance and are free to move about the room as you like.

Dallas Van Gogh has chairs and stools and you can stand or sit directly on the floor. If you purchased a Premium Flex or VIP Flex ticket, they give you a personal cushion before entering the exhibition.

Arlington Van Gogh has a variety of seating options: benches, bean bag chairs, carpets. You are also welcome to stand or sit on the floor.

Visitors can stay socially distant at Dallas' Van Gogh exhibition.
Paige Weaver
Arlington Van Gogh’s immersive experience follows a loose narrative, grounded by a setting of medieval stone arches that are incorporated into most segments. It begins with a gallery of Van Gogh pieces in this medieval setting. Elements of his works begin to move, shift and escape the confines of their frames.

There are various segments after this, generally following the timeline of Van Gogh’s life, focusing on his interpretation of Japanese art, cherry blossoms, sunflowers, the "Starry Night" and more. Each segment animates elements of Van Gogh’s original works: sunflowers tumbling from the ceiling, boats bobbing on gently flowing water, spirals of stars somersaulting across the room.

Van Gogh quotes are projected onto the wall and spoken aloud by a narrator as the Arlington immersive experience transitions from one segment to the next.

The Arlington Van Gogh immersive experience moves from these anthropomorphic works of art into a final segment that mimics the chaotic end of Van Gogh’s life, which was plagued by mental and physical illness. You feel lost in the medieval setting, with self-portraits of Van Gogh flickering in and out of the arches and the medieval columns crumbling before your eyes.

Dallas Van Gogh’s immersive experience is a series of Van Gogh paintings “come to life” with elements swirling, swooping, dancing, melting, morphing before your eyes. The experience watching these animated paintings is very similar to that of Arlington Van Gogh. The main difference between the two projections themselves is that Dallas Van Gogh has no narrative structure and the only way you know you’ve come to the end of the projection are the credits after the final work of art.

Both Dallas and Arlington Van Goghs have a soundtrack of classical music.

The projection quality of Dallas Van Gogh is superior. The rooms are darker than Arlington, which makes the images appear more vivid.

Both exhibitions have a wide range of ticket prices, which change according to the day of the week and time of day.

For Dallas Van Gogh, the cheapest single ticket is $39.99, all Monday and Wednesday tickets are that price. You can find a Friday midday ticket for $39.99, but Friday evening prices climb to $54.99. On Saturdays, tickets are $54.99 or $64.99, depending on the time you choose. And that’s just for a basic ticket, which has a fixed time admission.

You can purchase tickets to both Arlington and Dallas Van Gogh through Nov. 28.

Arlington Van Gogh instructs visitors to park in Parking Lot E for $10, but when we visited on a Thursday evening, we found an open lot nearby that did not charge. There is no official parking for Dallas Van Gogh, but the website recommends a number of nearby parking lots. We easily found street parking.

Overall, there are positives and negatives to both exhibitions. The setup and quality of Dallas Van Gogh immersive experience exceeds Arlington's, and you can bring in food and drinks. But tickets are more expensive. Arlington Van Gogh provides more historical context and the projection follows a loose narrative. But there is only one projection room in Arlington versus three in Dallas, and the quality of the projection is inferior.

If you can keep the two straight, and successfully purchase tickets for your desired exhibition, there are plenty of elements to delight viewers at both exhibitions.
click to enlarge 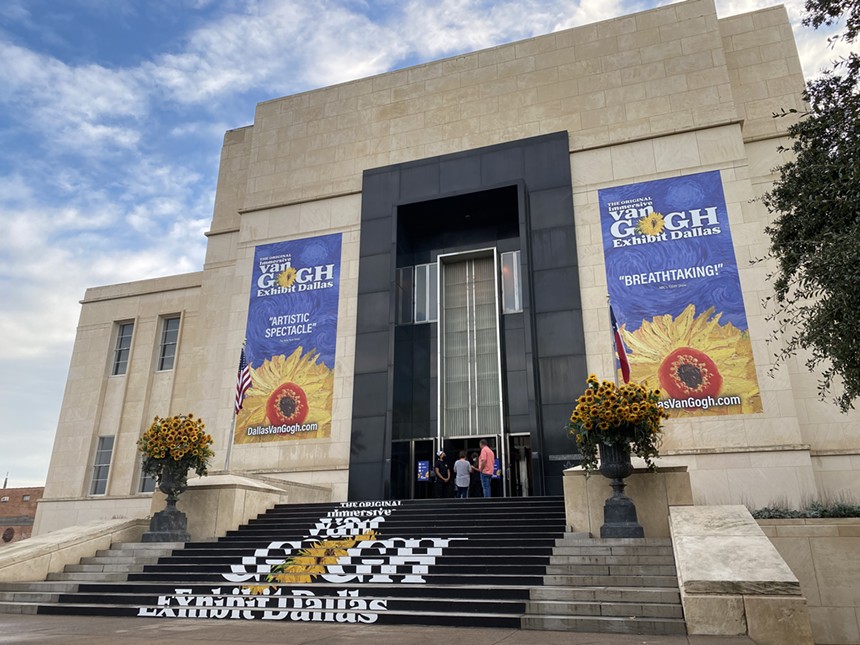 Dallas' Van Gogh exhibition makes it hard to miss from the street.
Paige Weaver
KEEP THE DALLAS OBSERVER FREE... Since we started the Dallas Observer, it has been defined as the free, independent voice of Dallas, and we'd like to keep it that way. With local media under siege, it's more important than ever for us to rally support behind funding our local journalism. You can help by participating in our "I Support" program, allowing us to keep offering readers access to our incisive coverage of local news, food and culture with no paywalls.
Make a one-time donation today for as little as $1.
Paige Weaver
Contact: Paige Weaver