Ahead of Adam Sandler's Dallas Show, Here Are Some of His Best Songs 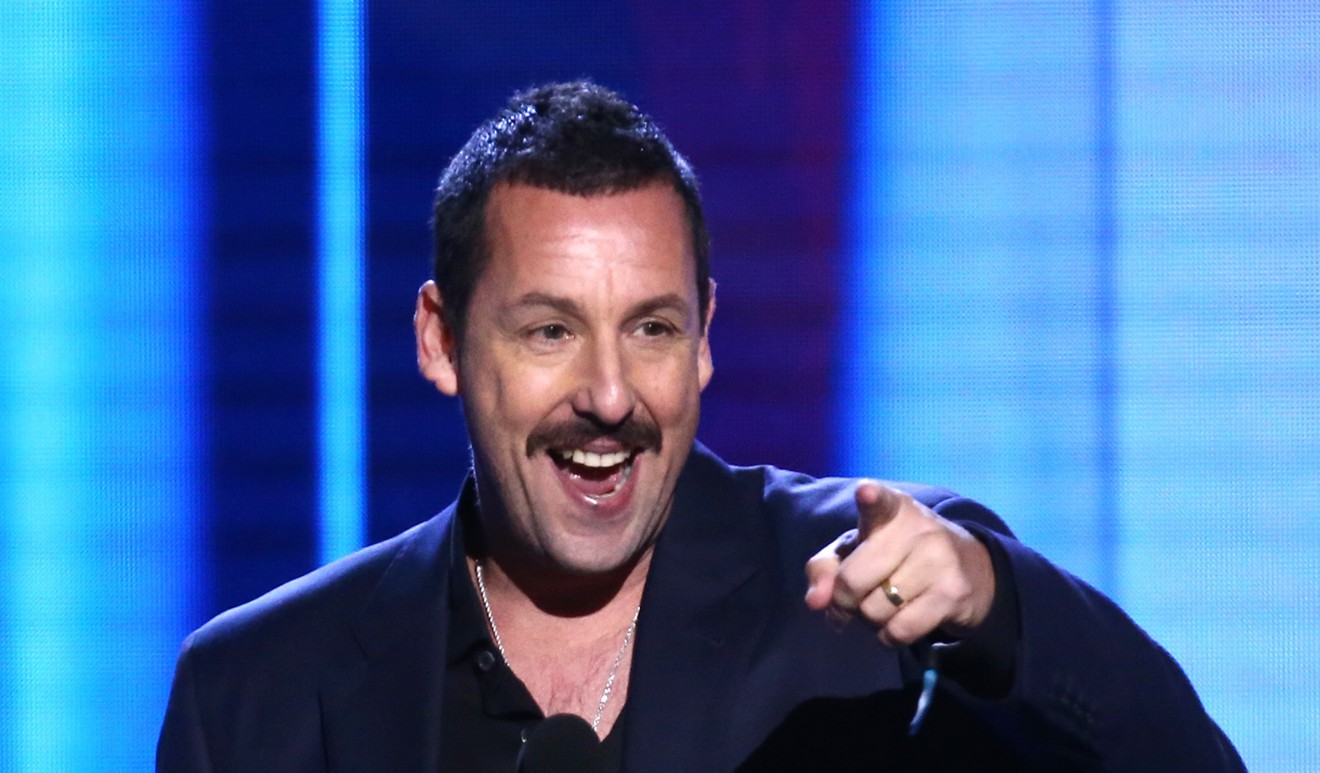 Adam Sandler's goofy songs are actually kinda great. Tommaso Boddi/Getty
Are you ready for more of the Sandman, Dallas? That’s right, Adam Sandler will be making his way to the American Airlines Center this February for a lively combination of music and stand-up comedy. Then again, this is Sandler we’re talking about, so you never know exactly what you’re going to get. The man-child of Hollywood has continued to surprise, delight and enlighten us for almost 30 years.

Once a Saturday Night Live breakout star (before he was fired), Sandler became one of the biggest movie stars on the planet in the 1990s thanks to the success of Billy Madison, Happy Gilmore, The Wedding Singer and Big Daddy. Reviews tended to decline in the early 21st century; 2011’s Jack & Jill was seen as a low point for Sandler (and American comedy in general), forcing audiences to ask whether the comedian we’d grown up with had finally lost his charm.

However, the past decade or so has been an interesting period of transition for Sandler. He signed a maverick contract with Netflix to produce and star in original films for the service; although he was initially mocked for signing on with a “streaming service,” Sandler was the first to get in on a trend that has now become extremely common among today’s top stars.

While Sandler’s Netflix films are generally more of the same thing we’ve come to expect from him, he’s sprinkled in more ambitious roles with auteur filmmakers. Sandler’s heartwarming performance in 2017’s The Meyerowitz Stories and his hypnotic work in 2019’s Uncut Gems earned him serious award season buzz; even the harshest critics of Blended or Just Go With It were forced to acknowledge that Sandler is a pretty great actor when he wants to be. This year, he gave one of the best performances of his career in the basketball drama Hustle, which featured more than a few Dallas faces.

Music has always been an integral part of Sandler’s work, along with his combination of raunchy humor and heartfelt sincerity, and it's a big part of why he continues to resonate as a symbol of optimism. Before you check out Sandler’s Dallas show, here are our picks for his best songs ever.

“Lunch Lady Land,” Saturday Night Live (1994)
You can’t get much better than Sandler and Farley in their prime creating chaos. In this SNL gem, Sandler leads a revolt against the egregious cooking techniques of Farley’s lunch lady before Kevin Nealon pops up to save the day. “The Chanukah Song,” Saturday Night Live (1994)
Although he initially performed it as a special segment for SNL's Weekend Update, “The Chanukah Song” has been a Sandler favorite for years as he continues to revise and revisit the classic song, adding new lyrics about what it really means to be Jewish during the holiday season. Perhaps most famously (or infamously), Sandler brought back the song for the animated film 8 Crazy Nights, the first of his many animated roles. "Ode To My Car," What the Hell Happened To Me (1996)
We all remember our first car, but not like Sandler, who has a particularly foul-mouthed tribute to the cheap vehicle he was forced to use during his youth. Although his profanity earned some censorship for his original album What the Hell Happened To Me, it made the track even more of a sought-after item for Sandler’s adolescent listeners. “The Thanksgiving Song,” Saturday Night Live (1997)
We’ve all had more than a few awkward Thanksgiving dinners with extended family. Sandler goes deep about his refusal to conform to polite behavior in the midst of a particularly volatile turkey dinner with unusual relatives.
“Somebody Kill Me,” The Wedding Singer (1998)
Compared to the childish antics of Billy Madison and Happy Gilmore, The Wedding Singer is one of Sandler’s more sophisticated 1990s comedies. After being left at the altar, Sandler bears his soul in this darkly hilarious cry to put an end to his misery. As he warns his co-star Drew Barrymore, "I was listening to the Cure a lot." “Grow Old With You,” The Wedding Singer (1998)
Sorry to spoil the ending, but The Wedding Singer ends happily. I know, we’re all shocked that Sandler gets the girl! In his live shows, Sandler has brought back this song about wanting to grow old with someone you care about as a tribute to his wife. In a world where celebrity scandals and tabloid stories dominate soc ial media, Sandler’s family life has always been squeaky clean, and this song is as wholesome as it gets. “Forgetful Lucy,” 50 First Dates (2004)
Although it initially seemed like it would be just another generic romantic comedy for Sandler, 50 First Dates surprised a lot of viewers with its genuine sweetness. The film’s depiction of illness may have divided critics, but it’s hard to doubt Sandler’s pure intentions thanks to beautiful moments like the “Forgetful Lucy” song. “Myron/Byron,” The Meyerowitz Stories (2017)
Perhaps you wouldn’t have expected Sandler to star in a project from the independent auteur Noah Baumbach, but when everyone expects him to zig, he zags. Sandler gets to play the loving yet underachieving son of Dustin Hoffman, and they share the piano for this fun duet. Sandler also performs the song with his onscreen daughter, Grace Van Patten, showing that he can be just as great a dad on screen as he is in real life. “Chris Farley Tribute,” 100% Fresh (2018)
The loss of Chris Farley was a devastating moment for many comedians, Sandler chief among them. Here he gives a powerful tribute to the best friend he lost at a young age in his 2018 comedy special 100% Fresh. He also performed the song when he returned to SNL as a host. “Station 69,” 100% Fresh (2018)
Sandler’s live special 100% Fresh was a humorous title for one of the best-reviewed projects of his career (historically, his films haven’t fared that well on Rotten Tomatoes’ “critics’ ranking” meters). Sandler is joined on screen by Rob Schneider for a hilariously crude account of what two astronauts get into when they’re stranded on a lonely space station.