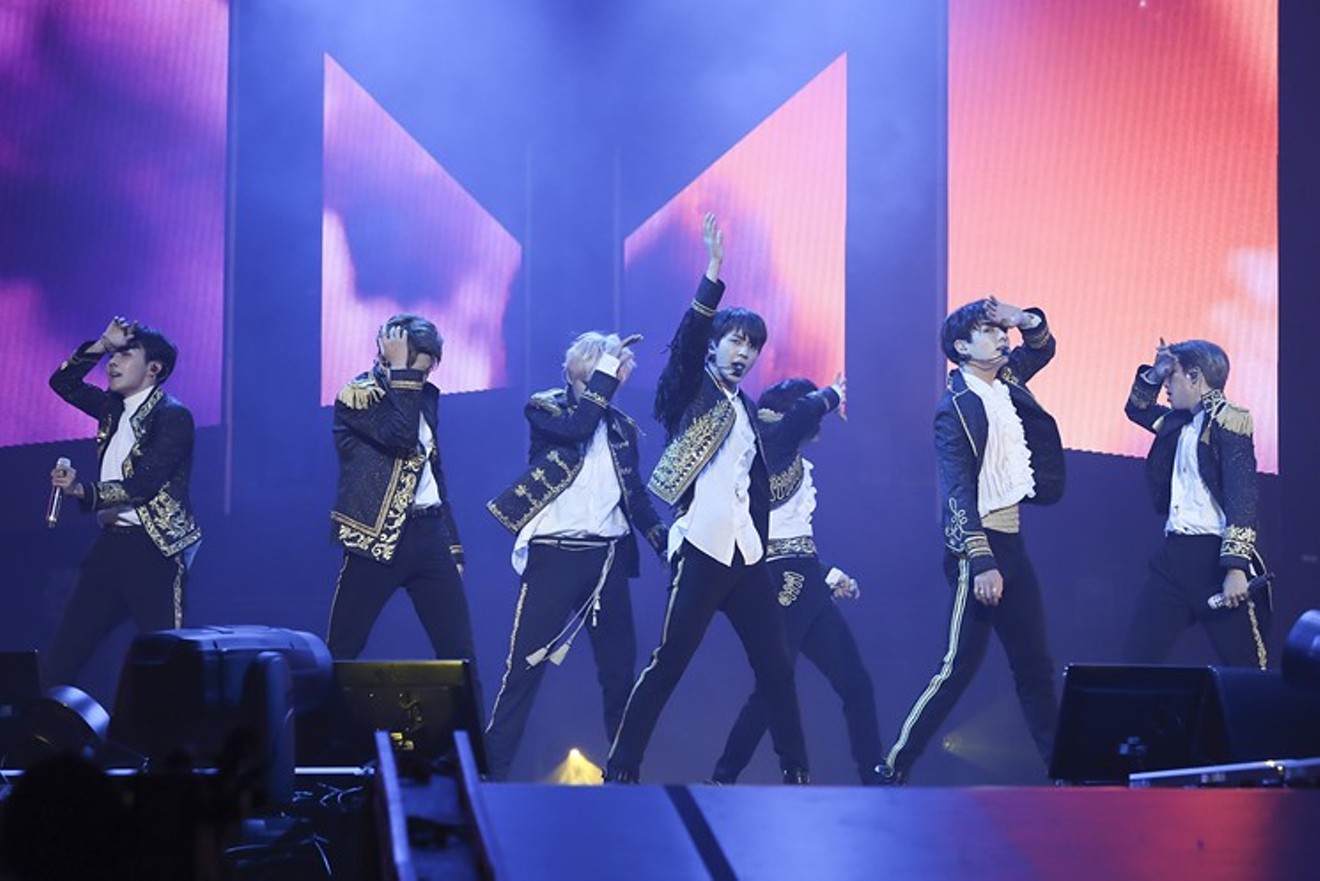 No, BTS will not be on this list. Big Hit Entertainment
It's been a while since BTS has graced us with its presence. The Korean pop group was supposed to land back in 2020 at the Cotton Bowl for their Map of the Soul Tour but, you know, the world almost ended.

Unfortunately, there doesn't seem to be a return date on their latest tour calendar, but that doesn't mean Dallas is going to be completely K-pop-less for the foreseeable future.

Just on Sunday, K-pop boy band AB6IX performed at The Studio at the Factory in Deep Ellum. AB6IX debuted in 2019 with the single "Breathe," a fast mix of quick tempos, boy band beats sung in English and Korean and spurts of word spitting raps. The group's next single, "Hollywood" showed them off to the world and led to their first American concert appearance. Singer Lee Daehwi said "Hollywood" has become "somewhat of a theme song for AB6IX" in a Billboard Q&A.

But there a bunch of original and tribute K-pop groups also making their way to our neck of the woods in the coming weeks. Here's just a quick taste of what you can expect.

Fort Worth fans can make plans to catch the Stray Kids on their second "Maniac" tour, which will stop in town Wednesday, July 6, at Dickies Arena. The nine-member boy band launched in 2017 with the single and video for "Hellavator" as part of an audition for a reality TV competition. "Hellavator's" rebellious, defiant sound would establish the group's electro-pop punk aesthetic mixed with the head-tilting boy band dance moves. Their I am album trilogy and the single "District 9," which hit the top 10 on the Billboard World Digital charts, helped build them a global audience and brought them worldwide tours.
Tomorrow X Together (TXT), the first group to come out of K-pop powerhouse Big Hit Entertainment's catalog in six years before striking a canyon of gold with BTS, has had only a couple of years to establish themselves on the K-pop scene, but it's a strong start. The group sits third on Billboard's Artist 100 chart just under Kendrick Lamar and Bad Bunny, and they haven't budged for 20 weeks. Each teenage group member premiered in 2019 with their own showcase video to show off their individual skills, creating a dream storyline and adding an element of mystery to the group's auspicious start before the band released the first collaborative effort with "Crown." That led the group's first album The Dream Chapter: STAR. They're scheduled to appear at the Texas Trust CU Theatre on Thursday, July 14, and they'll also perform with BTS' J-Star at Lollapalooza 2022.
This roundup has somehow turned into a sausage fest, so let's correct that with another show at The Factory in Deep Elum with a performance by the all-girl group (G)I-DLE. The five-woman singing group are on their first world tour; it started in Los Angeles and ends in Atlanta and will include a stop in between at The Factory on Saturday, July 30. (G)I-DLE has an on-again, off-again trajectory in their history, which started in 2018. The group has regularly occurring creative differences that have lead to a hiatus and the removal of group member Soojin over past allegations of bullying from a former classmate. Their latest offering, "Tomboy," borrows visuals from Quentin Tarantino and Harmony Korine films and creates a pop-punk sound that goes against everything you thought you know about K-pop music. They're basically the Spice Girls from a bizarro dimension where everything is the opposite. They're angry and don't give a fuck, and you actually want to listen to them.