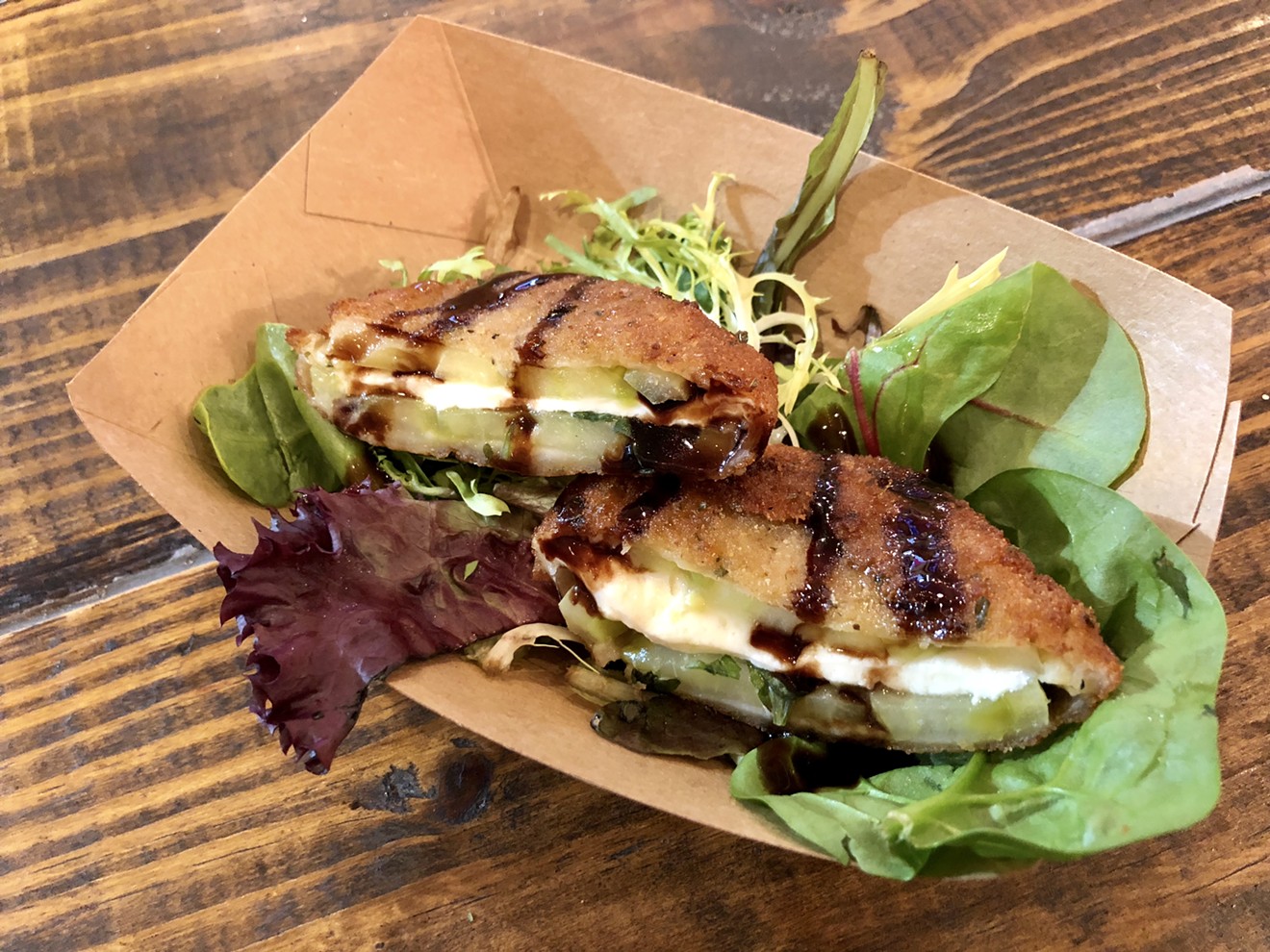 The Texas Fried Hill Country (14 coupons), a Big Tex Choice Awards finalist, is fresh mozzarella and basil sandwiched between two fried green tomatoes. Paige Weaver
The State Fair of Texas has made a name for itself with its fried, smoked, meat-laden dishes. One thing the fair isn’t known for, however, is its vegetarian offerings. But it’s easier than you’d think to find some creative vegetarian fair food.

Most dessert and drink items at the fair are vegetarian, the smoky bacon margarita and sweet bakin’ bacon notwithstanding, but this list is all about savory meat-free fair food. Of the slew of new foods that debuted at the fair this year, the Texas Fried Hill Country (14 coupons), which was a Big Tex Choice Awards top 10 finalist, is fresh mozzarella and basil sandwiched between two fried green tomatoes. It’s drizzled with balsamic and honey and served on a bed of greens. This is fair food, elevated.

Another new option this year, Fried Cup of Corn “Elotes” are a deep-fried twist on this traditional Mexican dish. Corn, Mexican cheese and seasoning are served in a flaky pastry crust. They are like little elotes empanadas. Though this was probably the vegetarian dish we most preferred flavor-wise, it was not an excellent value. You receive only three little empanadas per order, which are sparsely stuffed with corn. At 14 coupons ($7 dollars), it’s not a great deal. 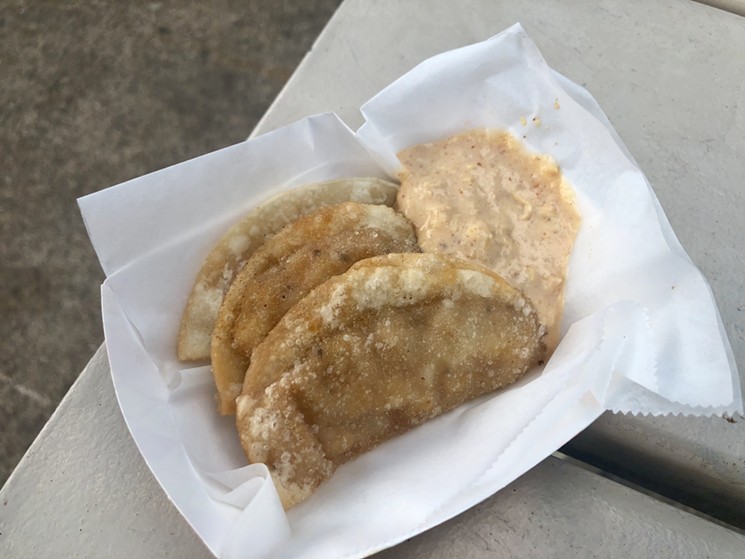 Fried Cup of Corn "Elotes," 14 tickets
Paige Weaver
Fried Stuffed Olives on a Stick (14 coupons) are stuffed with herbed cream cheese and served with creamy jalapeño ranch or honey mustard. The olives are huge and plump and are very generously stuffed with cream cheese. If spicy is your thing, you can also get them with fried jalapeños. 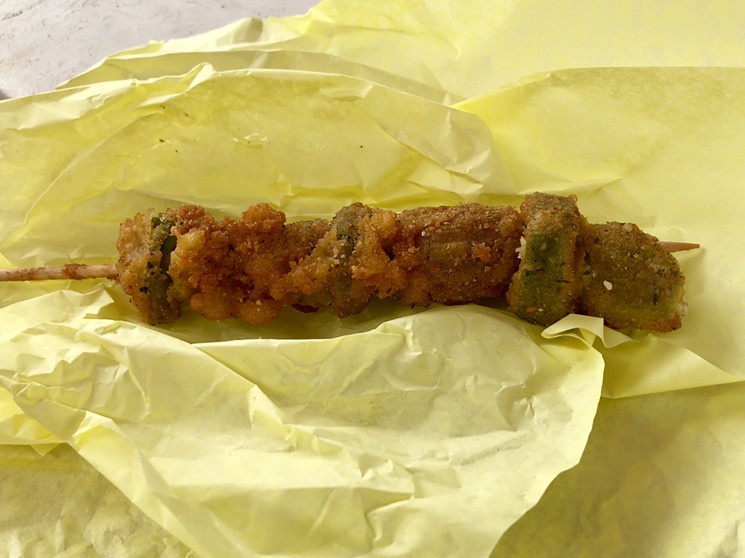 Fried Stuffed Olives on a Stick (14 tickets)
Paige Weaver
If you’re hankering for a classic corny dog, Fletcher’s now has two meatless choices: the veggie dog (12 coupons) and Cheezy Pup (10 coupons), new this year. There isn’t a hot dog or veggie in the cheezy pup at all. Instead you’ll find soft, melty American cheese wrapped in the traditional Fletcher’s batter. It’s called a “pup” for good reason – it’s about half the size of a regular Fletcher’s corny dog.

There are plenty of other meatless options, too. You can find gut-busting things like fried grilled cheese, fried spinach dip bites and even some previous Big Texas Choice Award winners are vegetarian – deep fried butter and fried PB, jelly and banana sandwich

The Pico Frito
Paige Weaver
Unfortunately, outside of basic, fried potato dishes, it’s tough to find vegan options at the fair. Even if you can find a fried item that’s vegan, most vendors use fry batters that contain eggs. Vegans definitely can’t go wrong with Tornado Taters, though.
KEEP THE DALLAS OBSERVER FREE... Since we started the Dallas Observer, it has been defined as the free, independent voice of Dallas, and we'd like to keep it that way. With local media under siege, it's more important than ever for us to rally support behind funding our local journalism. You can help by participating in our "I Support" program, allowing us to keep offering readers access to our incisive coverage of local news, food and culture with no paywalls.
Make a one-time donation today for as little as $1.
Paige Weaver
Contact: Paige Weaver