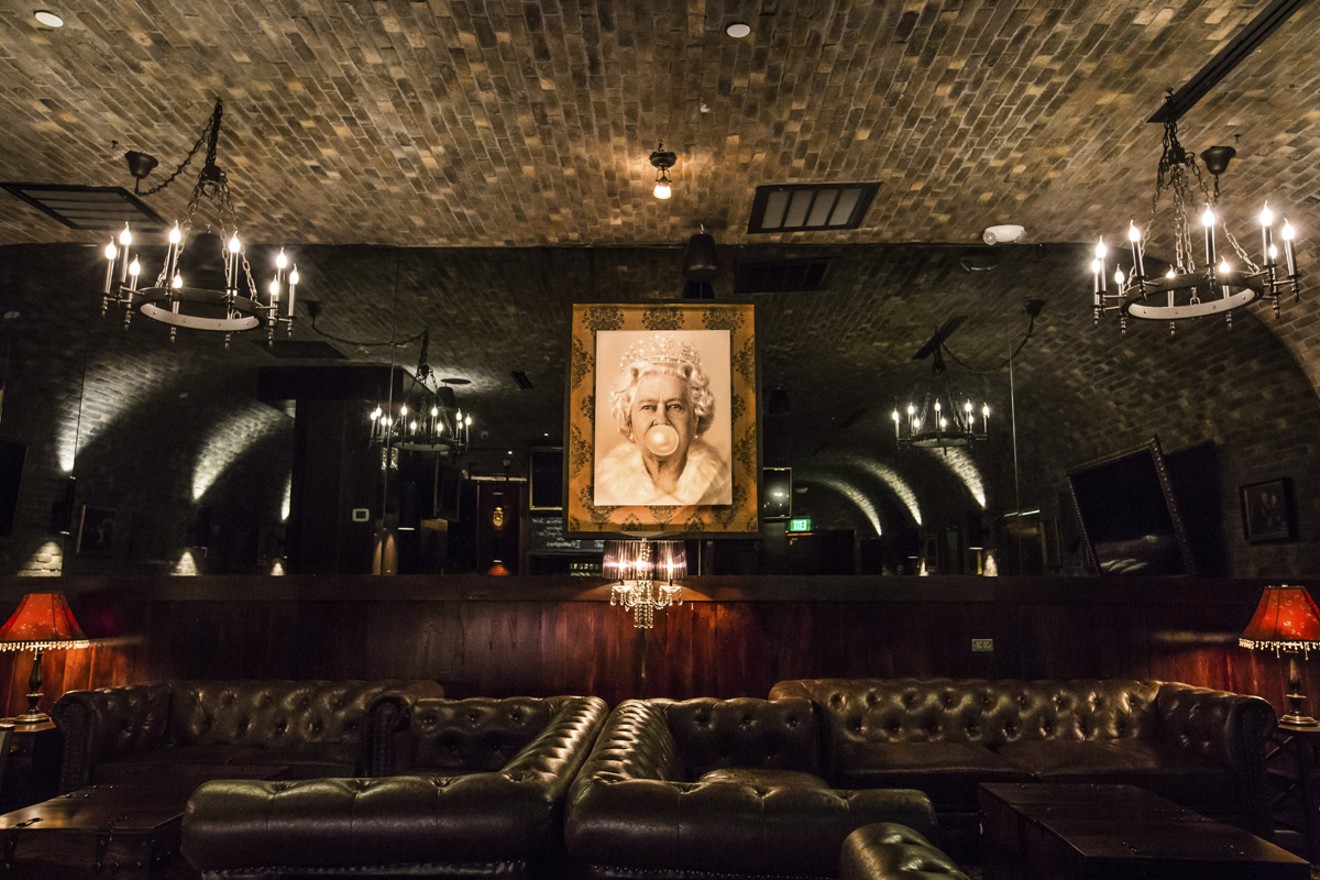 It's dark in here, and ILL Minster patrons, most of whom live in the apartments above, like it that way. Melissa Hennings
Settle Up is a column that critiques cocktail bars with the same gravitas that food critics apply to restaurants, exploring Dallas' cocktail concepts, menus, execution and service and steering discerning imbibers toward all the booze that’s fit to drink.

The last time I was in England, I was 20 years old and made all of my food and drink decisions based on what I thought was a good deal. Every afternoon, I’d buy a cucumber-and-butter sandwich (£6), and every evening, I’d meet my classmates at a dingy pub for a few warm pints of Guinness (£3). On the weekends, we’d venture to the bars that played boy band songs, and I’d splurge on a pitcher of Red Bull and vodka (£10) to nurse through the night. Like most poor kids who lived abroad, I barely made it out with a pence in my pocket and never had the impulse to return.

I have never relived that time of my life — that is, until I visited the London-themed ILL Minster Pub. This Uptown bar seems to have been designed by me, circa 2006. It has the look of a centuries-old foreign pub but the beverage options of a familiar nightclub. It’s everything a young, exchange rate-conscious yet down-to-party American could want from a bar. But if you, like me, don’t really fit that description anymore, you may feel like the exotic one at this theme-park fantasy of a bar.

ILL Minster — owned by SBBC Hospitium, the group behind Pilikia, the Tipsy Alchemist, Punk Society and Truth & Alibi — is hard to find, beneath the Gables Villa Rosa apartment complex and inside the Uptown Urban Market food hall. Once your eyes adjust to the dark, windowless bar, you’ll find the décor is quite stunning. The walls are covered in gray bricks, which curve inward at the ceiling and stretch all of the way across, giving the impression that you're standing in a train station with Platform 9¾ just around the corner.

The interior gives the impression that you're standing in a train station with Platform 9¾ just around the corner.
Melissa Hennings
The bar’s inviting sitting area has tufted leather sofas, a rug and a faux fireplace. Above, a cheeky illustration of the queen blowing a bubble with gum is prominently displayed. TVs play vintage football games (for you American readers, I should clarify we’re talking about soccer), and a suit of armor stands upright in the DJ booth. The soundtrack includes current banger hits of former One Direction members. You can get Guinness and cider on tap — along with plenty of other nonauthentic fermented beverages — and about a dozen original cocktails.

The main problem with ILL Minster Pub is that it is not a neighborhood bar; it is an apartment complex bar. Most of the people who drink there seem to live in the condos above, so those are the only people the bar needs to impress. These are the same people who wear knee-length SMU T-shirts out at night. On one of my visits, there was even an apartment mixer taking place, complete with drink tickets and free pizza. ILL exists in the science fiction future, where every high-rise contains all of your necessary amenities — brewskies, slices of pepperoni and potential dates — so you never have to exit the building.

The drinks all seem to be designed for an immature palate: None is very adventurous, and the ones that seem to have interesting ingredients don’t taste like it. Take the Mandarine [sic] Margarita ($10), for example, a basic margarita that includes mandarin orange distillate. The mandarin is nowhere to be found; it tastes like a margarita, nothing less, nothing more. The Oscar ($10) is another margarita variation, but at least with this one, you can see the additional ingredients: jalapeños and egg whites. The peppers' heat barely registers, but the egg whites give the drink a nice, frothy head. I thought at first that the egg whites gave the margarita a pleasantly smooth mouthfeel, but the chips of ice that remained in the drink after not being strained properly quickly undermined that.

I also tried the Uptown Girl ($10), which is made with gin, elderflower liqueur, lemon juice and muddled cucumbers. The elderflower liqueur leaves you with a nice floral aftertaste, but for some reason the drink is topped off with plain old soda, making it taste watered down. After I finished half of it and set it to the side, my bartender offered to make me his version of the drink. He used a cucumber-forward gin, tonic, lime juice and elderflower liqueur. It was a gin and tonic plus elderflower liqueur, and it was vegetal, spicy, floral and delicious.

The Oscar is a margarita variation made with jalapeños and egg whites.
Melissa Hennings
On the way out the door on my final visit, I polished off an ice-cold pint of Guinness and asked for my check. The bartender set aside the Red Bull he was drinking and rang me up. Unbeknownst to me, it was happy hour and drink prices were slashed. As I looked over my bill, I had to say, even from the point of view of a grownup, that was a good deal. Now if only it served cucumber-and-butter sandwiches.