A Texan-French fusion baker is now delivering goods in East Dallas. KEESH Bakery
After serving as a chef in the Dallas area for many years, Keith Cedotal has announced he is starting his first standalone service in the East Dallas area.

KEESH, which stands for "Keith's Epic East-Side House," is a Texan-French fusion café that delivers pastries and savory menu items to residents in East Dallas on the weekends.

“I live in East Dallas and love this community. So, I want to launch a brand I know people here will appreciate,” said Keith Cedotal, chef and owner of KEESH. "I hope they will taste my Texas roots and international heritage in what I’m making."

Cedotal grew up in San Antonio and comes from a mixed cultural background. He grew up eating food that was made by his French grandmother and his Mexican grandparents, which inspired him to pursue a career in culinary arts. 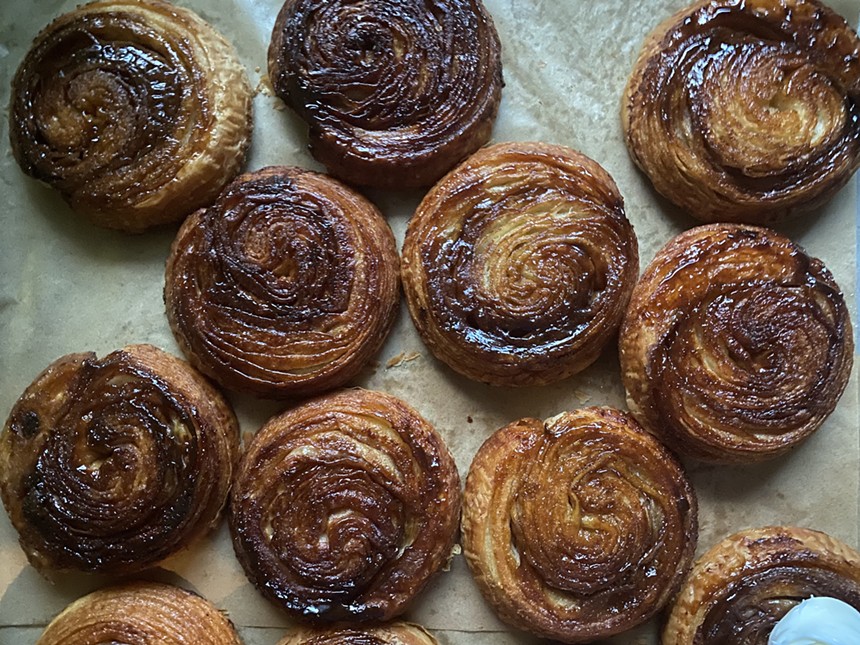 These are a play on cinnamon rolls and kouign amanns. Oooof.
KEESH Bakery
He got his degree from The Art Institute of Dallas and began working as a pastry chef for some of the city's best restaurants and venues, including Hotel ZaZa, the Adolphus, Uchi, TopKnot, Billy Can Can and many more.

Outside of baking, he was also the opening executive chef for Malai Kitchen in 2011, which was named one of 2011's Best New Restaurants in Dallas by D Magazine. Recently, he was recognized as Pastry Chef of the Year by the 2018 Dallas CultureMap Tastemaker Awards.

Cedotal is looking forward to seeing where this new venture goes and hopes to showcase it to the whole Dallas area soon.

"Eventually, I plan to open a neighborhood shop where I can bring Dallas what I’ve learned through all my years as a chef. Until then, I’m bringing it to your doorsteps,” Cedotal said.

KEESH is delivering to East Dallas residents in the following zip codes: 75206, 75214, 75218, 75223 and 75228. Orders can be placed on the KEESH website by 8 p.m. on Wednesdays for delivery on Saturday and Sundays.
KEEP THE DALLAS OBSERVER FREE... Since we started the Dallas Observer, it has been defined as the free, independent voice of Dallas, and we'd like to keep it that way. With local media under siege, it's more important than ever for us to rally support behind funding our local journalism. You can help by participating in our "I Support" program, allowing us to keep offering readers access to our incisive coverage of local news, food and culture with no paywalls.
Make a one-time donation today for as little as $1.