A charred mushroom taco served at last week's dinner Brian Reinhart
Revolver Taco Lounge has long been two restaurants in one: a casual taco counter in the front and a formal, reservations-only tasting of traditional Mexican foods in the back.

That double identity as a hangout spot and a fine-dining destination is part of the reason this author has, in the past, called Revolver the best restaurant in Dallas.

Then coronavirus messed everything up, shutting down both intimate dining rooms. At half-occupancy, either could hold only a handful of customers. And even before the virus struck, chef-owner Regino Rojas was already contemplating changes to try to adapt to the changing restaurant economy. Pulpo al pastor
Brian Reinhart
Thursday, Rojas will unveil his counterattack against coronavirus. It is appropriately feisty, full of both personality and tacos. Its name is La Resistencia.

The inside of Revolver has been dramatically transformed. Rojas put up a wall where the old counter used to be, blocking off the front dining room from the kitchen. He’s also installed a small, new kitchen unit centered on a Japanese-built yakitori grilling station. Nearly everything is painted black, and what wasn’t yet black when I visited on Saturday will be painted soon.

The staff at La Resistencia will wear all black, too, from their boots to their gloves. Bandanas and science-fiction-style visors complete the look. Rojas says he planned to order Daft Punk helmets for his servers, until he found out they cost $1,000.

Diners will need to make reservations and pass a front-door temperature check to enjoy a six-course, $65 La Resistencia tasting. That’s around half the price of the old tasting menu, and the new dining room has only eight seats.

Despite the smaller space and price tag, Rojas’ ambition is as big as ever. The main themes, he explained to diners at soft-opening meals last week, will be “corn and protein.” The corn La Resistencia uses is all from historical heirloom varieties, which Rojas carefully sourced from villages — indeed, specific families — in Mexico.

Patrons might see tortillas made from red, yellow, blue and white kernels in a single meal. Even La Resistencia’s logo honors the ingredient: It’s a Black Power-style raised fist, clutching an ear of corn.

The yakitori grill comes into play with the proteins. Rojas loves the setup because it’s an efficient grilling method with great results — and because binchotan, the special charcoal, burns for hours at a time. Plus, Yoshimasa-brand grilling stations come with ample room to line up prepped ingredients, which enables Rojas’ team to serve courses at a fast pace.

The new kitchen of La Resistencia
Brian Reinhart
Expect the menu to change frequently, but all of Revolver’s signatures will be here — the obsessive attention to Mexican ingredients and tradition; the occasional, flashy use of luxury foods such as caviar and Wagyu rib-eye; the world-class tortillas, as fresh as humanly possible; the unique combination of respect for heritage and defiant attitude. All of those traits combined in an appetizer Rojas served at last week’s preview dinners — before his four courses of tacos. 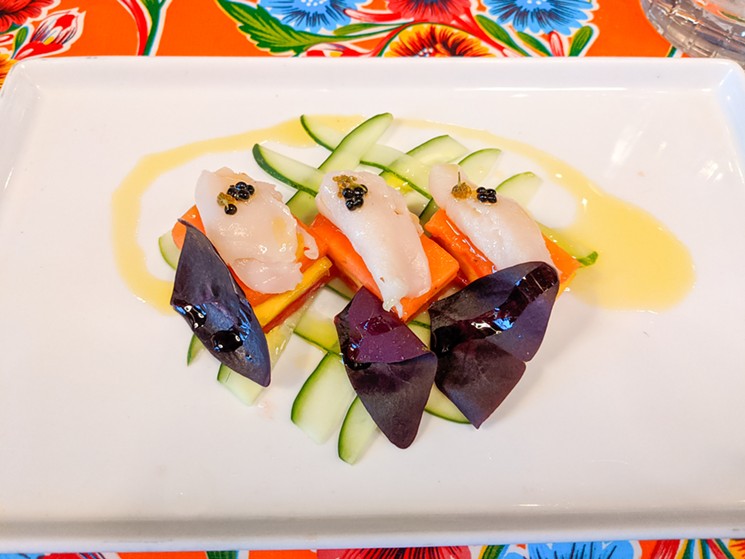 The beginning of last week's meal
Brian Reinhart
If there’s a way to do fine dining in a pandemic, it looks like this: a small, economical kitchen serving an equally small dining room, with safety measures that, like the servers’ visors, are used to protect everyone but also to go with, rather than against, the atmosphere.

Now the question for Rojas — and for other dining rooms opening back up, including Tei-An and Knife — is whether customers will feel safe re-entering high-end restaurants and spending serious money. Consumer and employee safety are not the only risks for these businesses; many patrons have taken pay cuts or changed their eating habits.

But as some of Deep Ellum’s bars throw their doors open to welcome crowds of thirsty customers, and as the neighborhood’s party buses chug back into motion, it’s good to know that there will be an island of sanity hidden behind dark windows, preparing to serve top-quality food in a conscientious manner.

And it’s fitting that that island is called La Resistencia.

Revolver Taco Lounge, 2701 Main St. (Deep Ellum). Make La Resistencia reservations online.
KEEP THE DALLAS OBSERVER FREE... Since we started the Dallas Observer, it has been defined as the free, independent voice of Dallas, and we'd like to keep it that way. With local media under siege, it's more important than ever for us to rally support behind funding our local journalism. You can help by participating in our "I Support" program, allowing us to keep offering readers access to our incisive coverage of local news, food and culture with no paywalls.
Make a one-time donation today for as little as $1.