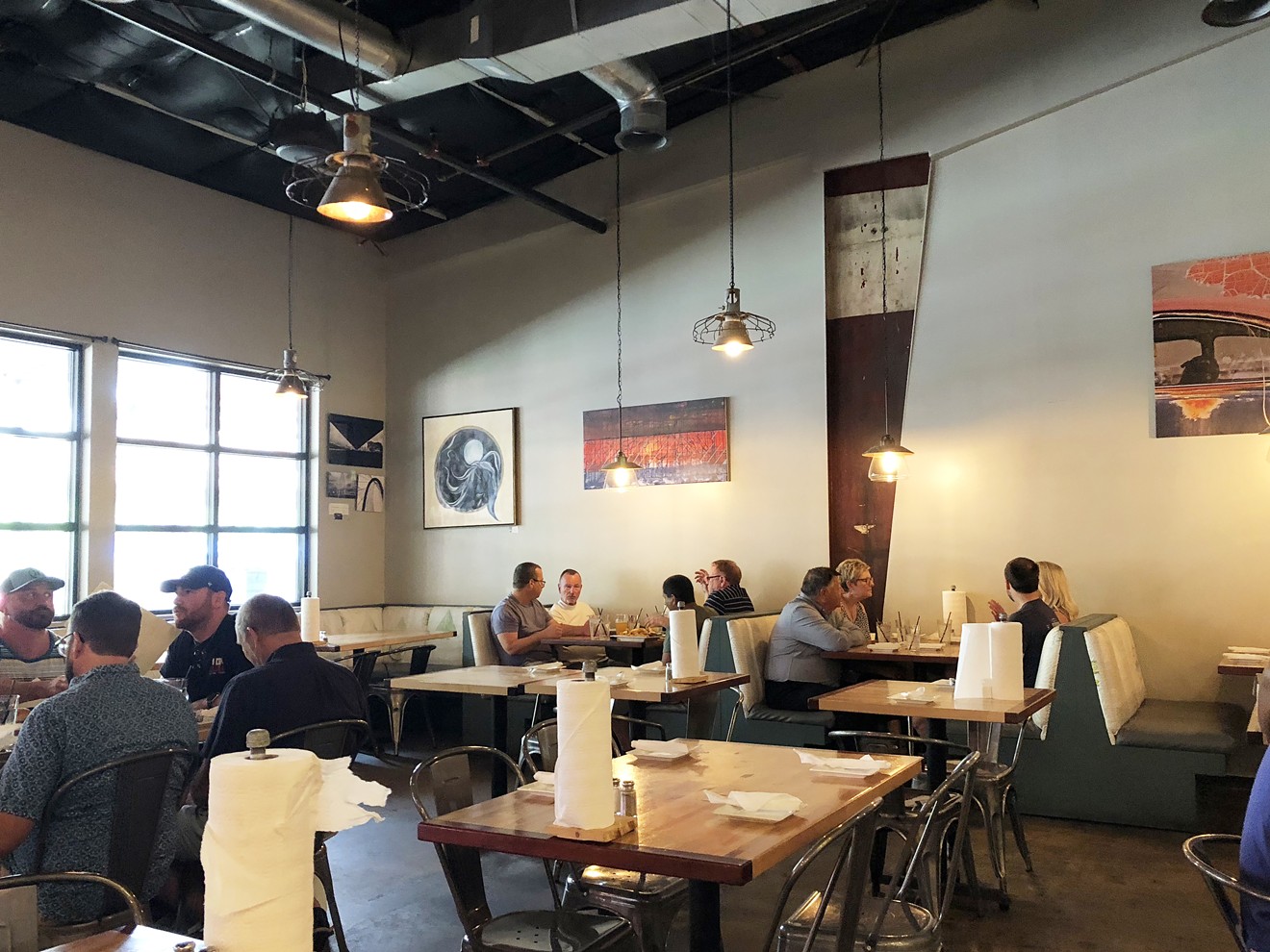 LUCK in Trinity Groves serves brunch from 11 a.m. to 4 p.m. every Sunday. Taylor Adams
If you're looking for superior French toast, you're in LUCK. Literally.

You'll find LUCK, which stands for Local Urban Craft Kitchen, among the long strip of restaurants in Trinity Groves. It offers 40 beers on tap and a full menu — along with a brunch menu that makes it worth skipping church.

Sitting down during brunch hours (11 a.m. to 4 p.m. Sundays), each guest will get the restaurant's regular menu, and the table gets a brunch menu that fills one piece of paper. At first, your table of six might covet that piece of paper as it slowly makes its way around. But don't fret — there's not much of a difference between that menu and what you already have in front of you. LUCK's chilaquiles.
Taylor Adams
Most of the menu items overlap, but there are a few exceptions, such as the chilaquiles ($15 for pulled chicken, $18 for shrimp). The green salsa offered the perfect amount of heat for this mixture of tortilla chips, queso fresco, sour cream, pickled onions, cilantro and an egg.

The pozole ($6 for a cup, $10 for a bowl) is on both menus but is perfectly appropriate for brunch, particularly if you're recovering from the previous night. The pork is tender in the savory broth, but the meat needs additional salt.

The signature pastrami sandwich ($14) is on both menus, offering LUCK's house-cured and smoked meat. But on the brunch menu, you can get it with eggs Benedict. The Texas toast topped with pastrami, eggs and hollandaise makes for a beautiful plate. But there's a downside: If you want tender, juicy slices of meat, temper your expectations. Two words: pastrami Benedict.
Taylor Adams
The shrimp and grits ($18) outshine the rest with a large bowl full of cheese grits, a creole sauce, shrimp, green onions and an egg. Go to enough brunches, and you'll know this standard isn't worth ordering most of the time. LUCK proves an exception. The grits were perfectly seasoned and had the right consistency, and the sauce — more like a salsa — made the dish one of the best things on the table.

But the title of very best belongs to the bread pudding French toast ($8). Even if you read the words “bread pudding” and cringe as you remember the tasteless dessert at funerals, you'll want to try LUCK's version. Four round slices fill a long plate of French toast made with sweetened condensed milk and topped with candied pecans. It's the perfect excuse to have dessert after a savory breakfast.

Since you have the regular menu in front of you, if you have a group and want appetizers, the pretzels ($8) and German bierocks ($10) are worth ordering. The pretzels come with mustard and a beer-cheese fondue. That same fondue is served with the meat- and cheese-filled pastries, along with an au jus for dipping. Three pretzels and three bierocks come with each order, but the latter are easy enough to split — if you're feeling generous.

LUCK, 3011 Gulden Lane (Trinity Groves). Brunch is served from 11 a.m. to 4 p.m. Sunday.
KEEP THE DALLAS OBSERVER FREE... Since we started the Dallas Observer, it has been defined as the free, independent voice of Dallas, and we'd like to keep it that way. With local media under siege, it's more important than ever for us to rally support behind funding our local journalism. You can help by participating in our "I Support" program, allowing us to keep offering readers access to our incisive coverage of local news, food and culture with no paywalls.
Make a one-time donation today for as little as $1.