The Ultimate Soup Dumpling Power Rankings for the Dallas Area 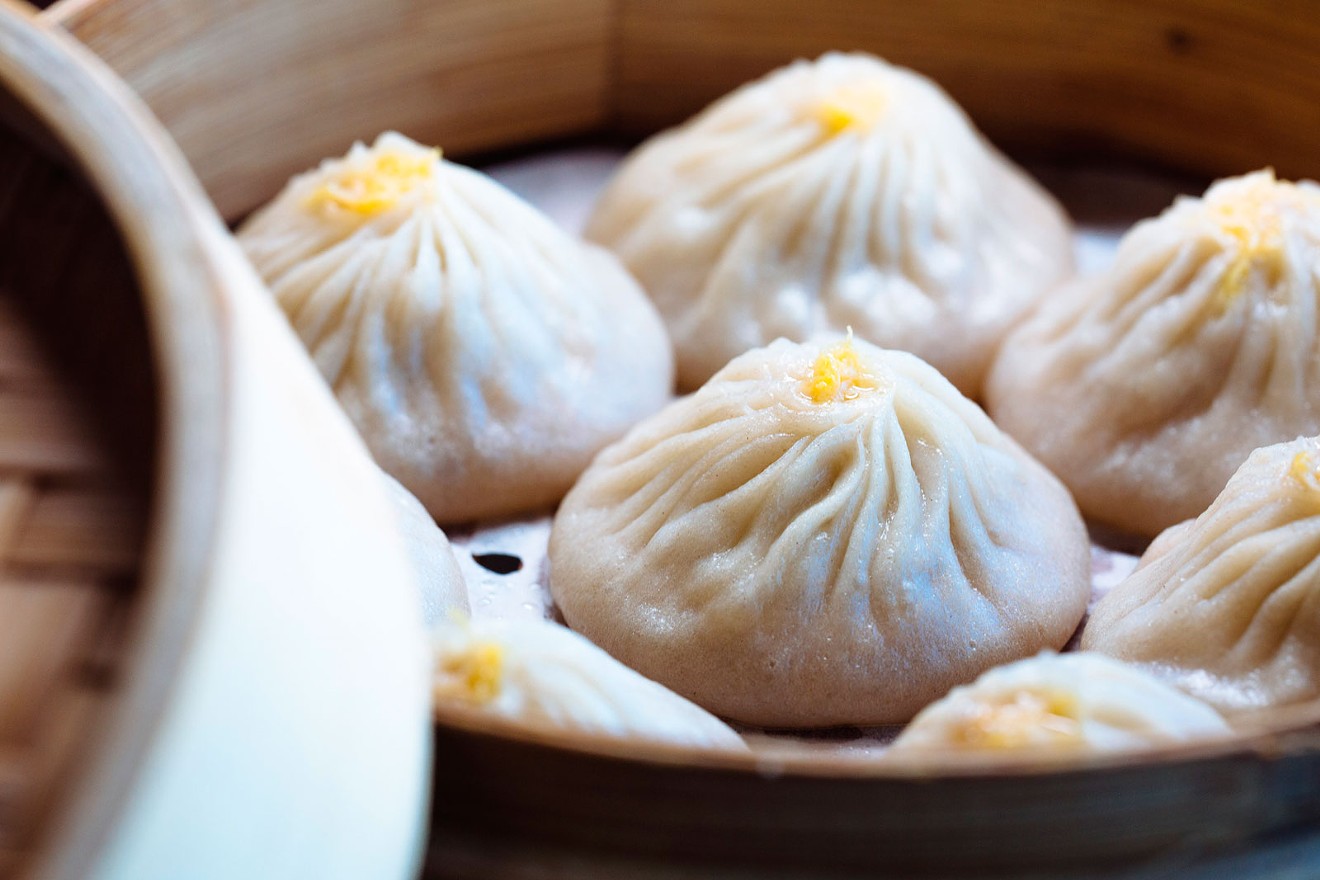 The xiao long bao (soup dumplings) are listed on the Fortune House menu as "steamed juicy dumplings," and you need them. Kathy Tran
There’s nothing as wonderful as a good steamed soup dumpling.

Juicy dumplings, as they’re also called, are miniature works of art, with a thin and delicate dough wrapper folded around a combination of meat and aspic. As the dumpling steams, the aspic melts into broth, filling each dumpling with its namesake bit of soup.

The converse, of course, is that there’s nothing as disappointing as a poor soup dumpling or, worse, one without any soup in it. So we did the only thing we could: We tried all of the xiao long bao in the Dallas area, and ranked them.

We offer just two caveats. First, we excluded Dragon House in Southlake on the grounds that it is closer to Fort Worth and outside this author’s jurisdiction.

Second, contrary to what you often read on the internet, there’s no wrong way to eat a soup dumpling. Place it on your spoon, bite into the side and suck the soup out? Sure. Pop it all in at once? Go for it. (If you do need pointers, let Kevin Pang help you.) 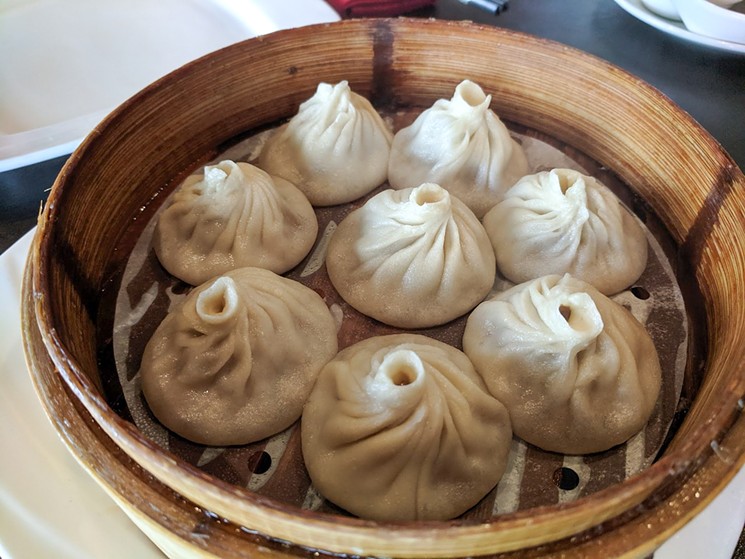 After several years of personnel changes and a drama-filled change in ownership, Fortune House’s “steamed juicy dumplings” are still the best in the Dallas area. They come with a filling of either pure pork or pork combined with crab meat, and they’re flawlessly made, with thin wrappers pleated perfectly across the top. The filling is ultra-flavorful and generously portioned, too.

There aren’t too many other dishes on the Fortune House menu that rise to this same height of excellence — we do recommend “spinach in special consomme” and beef with asparagus and tangerine peels — but with the best soup dumplings in Dallas on hand, why order anything else? 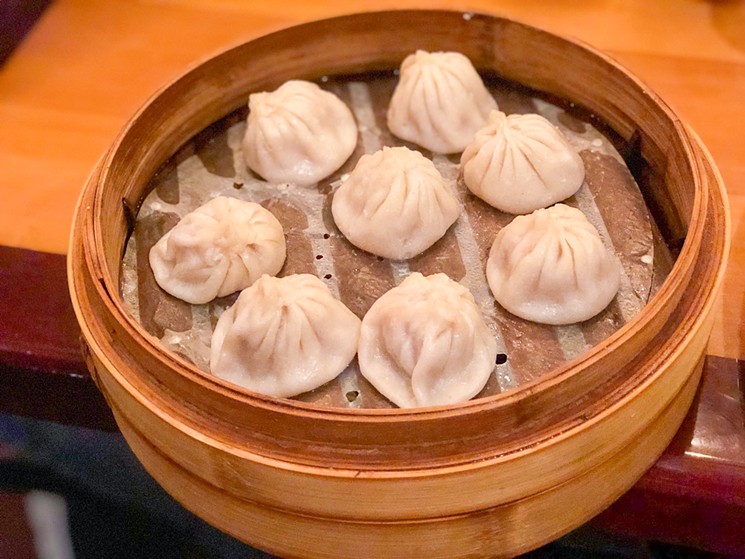 Jeng Chi is a longtime staple of Richardson’s Chinatown, and it was also one of the first real-deal Chinese restaurants in the Dallas area to be patronized by Anglo customers. That helps explain why the dining room, on the Sunday afternoon of our visit, is elegantly decorated and nearly full with tables of non-Chinese diners.

The “juicy dumplings” here — notice the adjective — come in a whopping six different varieties, ranging from curried chicken to pork and lobster. Our pork and crab dumplings had lovely thin wrappers and marvelously flavored broth, just not very much of it. The lamb dumplings were even more intensely flavored, a gamy, savory tongue-punch of rich lamb broth and meat. It would be hard for one person to eat more than two lamb dumplings, but hard for one person to eat fewer than, say, four or five of the others. 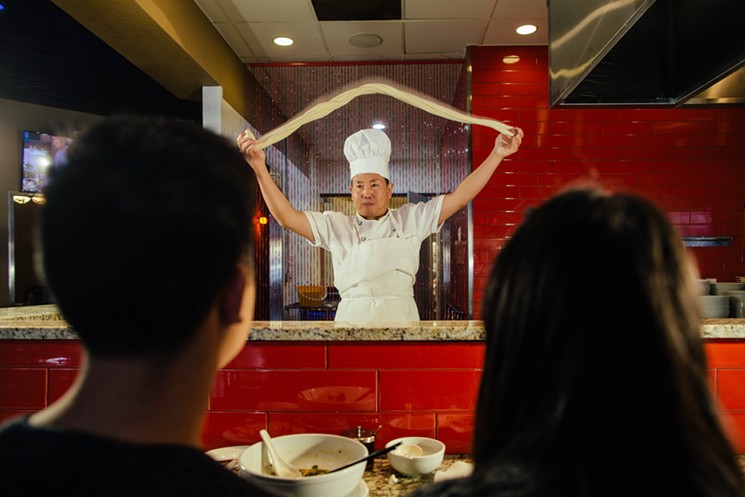 Thanks to chef Charlie Zhang's noodle showmanship, a meal at Imperial Cuisine feels more like dinner and a show.
Kathy Tran

Founded by a chef defecting from Royal China, Imperial Cuisine does its best work at the hand-pulled noodle counter, and almost any plate from the two (count them!) menu sections devoted to specialty noodles is excellent. The soup dumplings here come in just one variety, but the wrappers are pleated beautifully and the filling is generous. These are very good dumplings, on a level with Jeng Chi’s; we’re rating them a tiny step behind because the Imperial wrappers were just a little chewier on our visit. 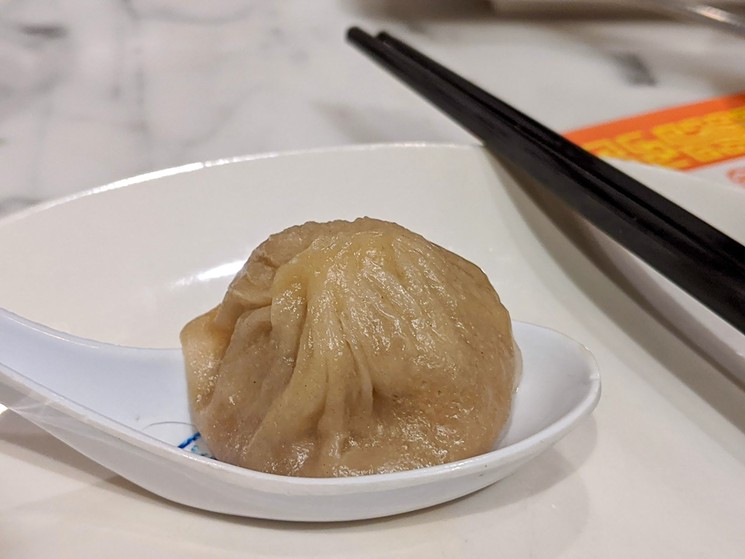 A single soup dumpling waits to be devoured at Royal China.
Brian Reinhart

The over 45-year-old institution at the corner of Preston Road and Royal Lane was one of the original soup dumpling purveyors in Dallas. A few years ago, its flamboyant noodle chef, Charlie Zhang, branched out on his own, founding Imperial Cuisine in Richardson (see just above).

Let’s be frank: How high you rank Royal China’s soup dumplings is a matter of taste. For some diners, these dumplings will be among the best in town. The essential issue is their flavor, which is just enormously rich, meaty and savory. Aside from the wrappers, which stick to everything (paper, chopsticks, plates) but hold together beautifully, there’s nothing delicate about Royal China’s approach.

If you like a full-on flavor attack, Royal China’s soup dumplings are some of the best in town, but try those lamb dumplings at Jeng Chi, too. Even if subtlety isn’t your thing, though, it can be frustrating to see dumplings with so many pleats, but such indifferent shaping at the top, where few of the folds come together. 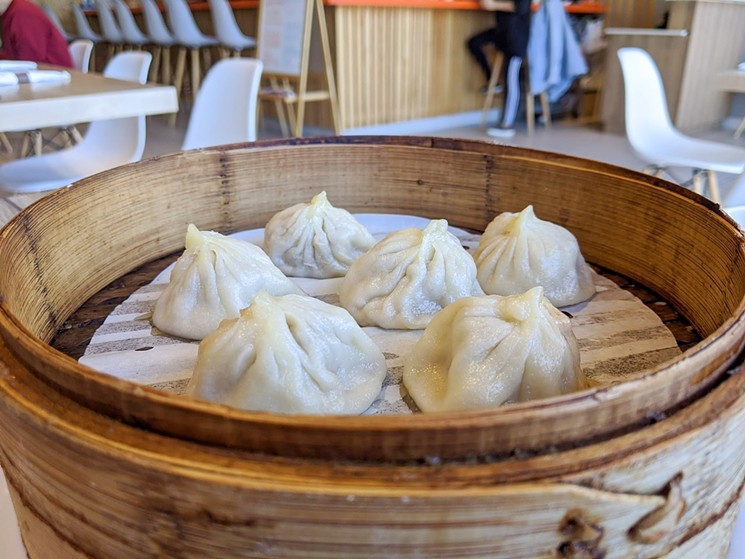 Dumplings at Mulan Noodle and Grill in Carrollton
Brian Reinhart

We didn’t visit this relative newcomer in Carrollton at an ideal time: The head chef was on vacation in China, visiting family for the Lunar New Year. That might explain why the juicy pork dumplings look a little rustic, but otherwise they tick all the boxes, with a soft, springy dough that bends but doesn’t break and a filling almost like a very loosely packed meatball. There’s a strong note of chicken broth in the soup portion, and Mulan’s dumplings are a little milder-mannered than those ranked higher up, but they’re dangerously easy to eat. Next time, we’ll try the crab versions. Soup dumplings are a recent addition to Wu Wei Din’s menu of dan dan noodles, spicy wontons and many regulars’ favorite dish, the fried pork chop on fried rice. The xiao long bao here are being made properly — picturesque and with very good dough — and they taste good, although their rivals at Jeng Chi and Fortune House deliver even bigger punches of richly meaty broth.

Overall, successful, but not yet up to the level of Wu Wei Din’s devour-them-all wontons. If they ever do reach that level, everyone else in town will need to watch out. 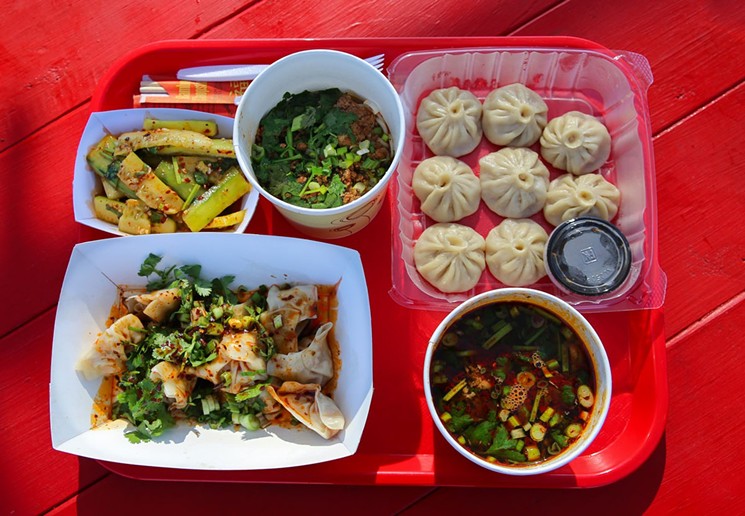 This one’s kind of our fault. In our original review of Monkey King, we complained that the soup dumpling wrappers were so thin that some of the dumplings arrived at the table already torn and leaking.

Monkey King has certainly solved that problem now — indeed, they’ve gone the opposite direction, with thick wrappings that stick to the insides of your mouth. The flavor of the fillings isn’t bad, but these dumplings, which are big and fully loaded, require a good few seconds of chewing. 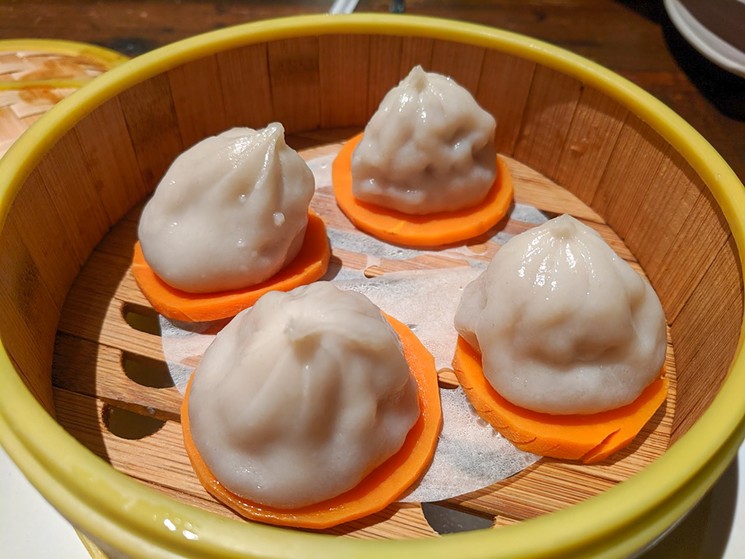 This upscale Plano eatery’s soup dumplings come just four to an order, and they also come resting on fat carrot slices. We’re not sure what the carrot is about, but Mah-Jong’s soup dumplings actually have good flavor and a nice amount of broth. The meat is nicely textured, but the dough is shiny, sticky and tacky. 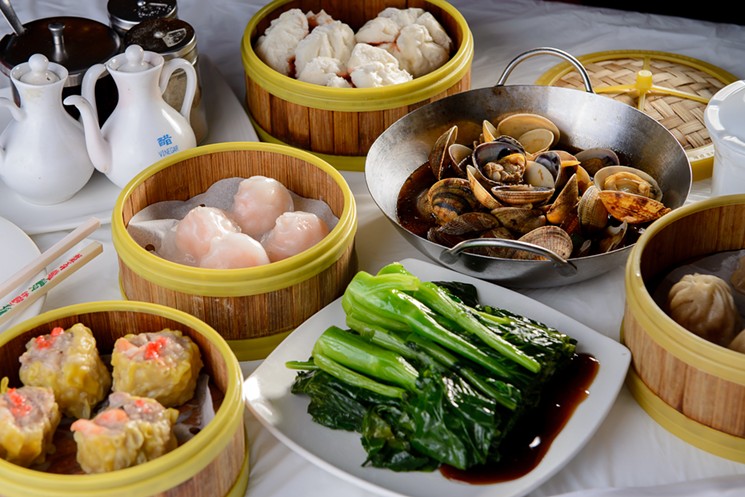 Kirin Court is known in the Dallas area for its dim sum, though we're not entirely sure why.
Alison McLean

Kirin Court’s dim sum soup dumplings just barely escape the bottom spot because, at the end of the day, they taste pretty good. The problem is a tiny technicality: There’s no soup.

For a while, we actually debated which dumplings we’d been served. But then the rest of our order turned up, and there was no avoiding the fact that Kirin Court had just served us totally broth-free xiao long bao. I accidentally dropped one of my dumplings, and it hit my plate with a hard, ugly thud. Liquid didn’t splash anywhere, because there wasn’t any. Decent taste, again, but a definite failing grade. 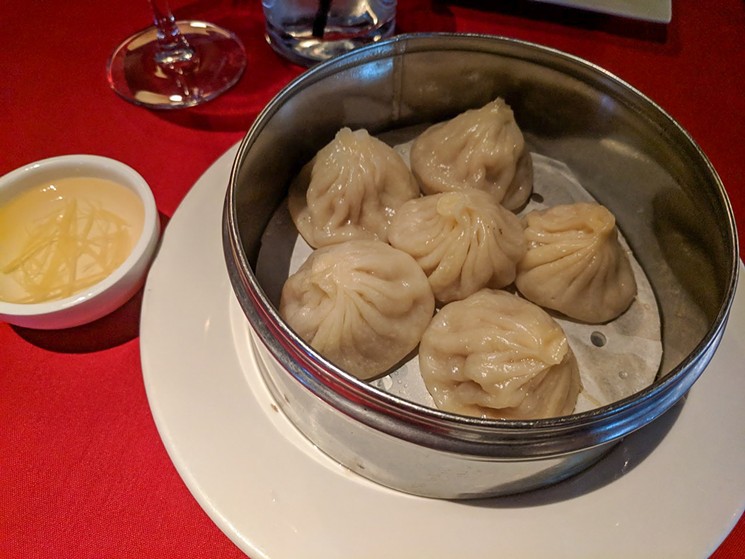 Yao Fuzi is a strange place. This old-fashioned, high-end, highly Americanized Plano institution has a lavishly romantic dining room, late-night-dark at all times of day, with Frank Sinatra and Michael Buble crooning over the speakers. When we visited, every other customer, except for the young daughter in a mother-daughter duo, was white and over the age of 50.

The soup dumplings did not improve our experience. Although they are made properly — the dough is stretched thin and pleated elegantly, and none of the dumplings tear or fall apart — there’s just no flavor to be had from the filling. The broth, in particular, tastes exactly like good old chicken broth, the kind you buy from the store in a carton. Given that the rest of our meal was even more disappointing, including an artificially sweetened, gloopy sauce coating some fried soft-shell crab, Yao Fuzi isn’t worth the surprising expense.
KEEP THE DALLAS OBSERVER FREE... Since we started the Dallas Observer, it has been defined as the free, independent voice of Dallas, and we'd like to keep it that way. With local media under siege, it's more important than ever for us to rally support behind funding our local journalism. You can help by participating in our "I Support" program, allowing us to keep offering readers access to our incisive coverage of local news, food and culture with no paywalls.
Make a one-time donation today for as little as $1.