Coming to Oak Cliff: An Ironic, Millennial-Pink Coffee Shop With "So Much Internets" 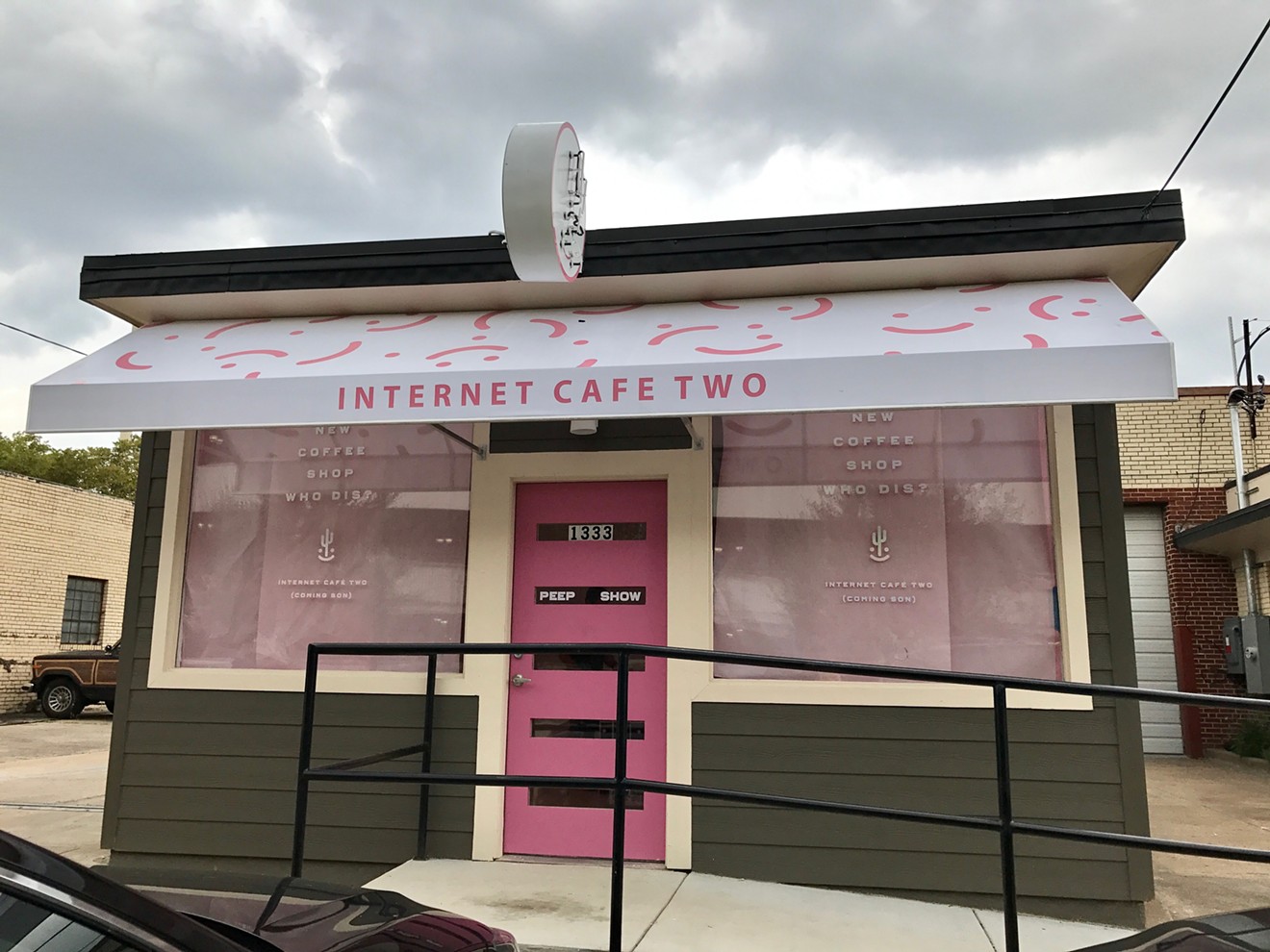 For the last few weeks, Oak Cliffers have been curious about this forthcoming coffee shop that mysteriously popped up on Plowman Avenue. Beth Rankin
On a sleepy stretch of Plowman Avenue in Oak Cliff, a pink-accented anomaly that recently popped up has neighbors scratching their heads. "New coffee shop, who dis?" stickers on the front read. A tiny window in the door is labeled "peep show," allowing curious people to peek inside at what will soon become Internet Cafe 2.

Passers-by have long been speculating about this little building at 1333 Plowman Ave., and its story is even more entertaining than all the rumors flying around. Modern, millennial-pink furniture is accented by stark lines and floppy disks used as a design element.
Beth Rankin
Internet Cafe 2, which will open the first week of October, is a new project from Wilkes and her husband, Paul. Paul is the former owner of Glass Optical in Oak Cliff, and Megan is the co-owner of Emporium Pies. They own several buildings, including Internet Cafe 2's, on this stretch of Plowman, where Emporium's office is located. Paul and Megan Wilkes are opening Internet Cafe 2 next to the Emporium Pies office on Plowman.
Beth Rankin
"We thought, what if we open a coffee shop that makes really good coffee but also could be a little bit ridiculous?" Megan says. Thus, Internet Cafe 2 was born.

The cafe, which will be open 7 a.m. to 2 p.m. daily, will serve standard coffee and espresso drinks, snow cones and Pop Tart-esque pastries Megan calls "sugar rectangles." Those who pop in, grab a cup of coffee and leave might not think much of the joint.

"You can get coffee here and not be bothered, but if you start kicking the tires, you’ll find some really funny stuff," Megan says.

First off, the name: There is no Internet Cafe 1, Megan says. The cafe will have "lots and lots of outlets but nowhere to sit," Megan jokes. "That’s not on purpose; it's because the place is really small, but that’s kind of ironic."

Even still, the shop will have "so much internets," Megan jokes. "We’ll have eight different internets available on our menu," she says. "One cup of coffee equals one internet." 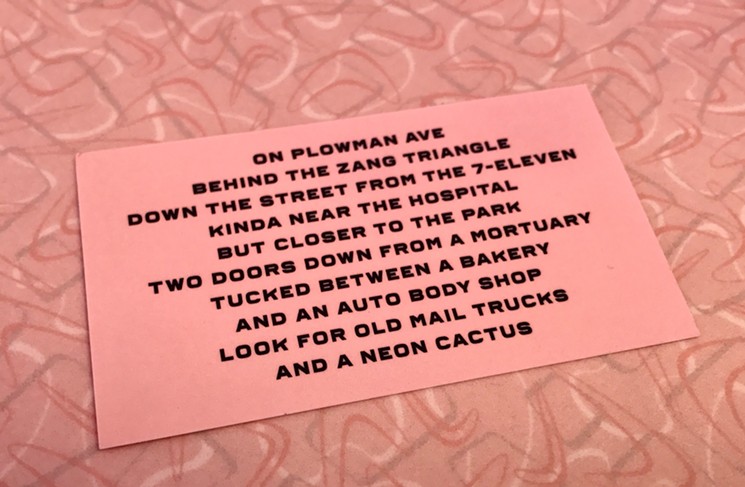 The bathroom at Internet Cafe 2.
Beth Rankin
You can order your latte with regular or "hipster milk," Megan says, and if you order the lazy iced latte, "your shots of espresso is poured over ice, and you have to go to the bar to pour your own milk. There will be a light discount for labor," she says. "If you pay extra for hipster milk but then you ask for a sweetener that’s been known to cause cancer in lab rats, we’ll ring the irony bell for you."

The cafe will also have "light programming," Megan says. "On the first Thursday of every month, we'll host beat poetry night, where we encourage local business owners to come read their one-star Yelp reviews with like a bongo drum accompaniment."

"It's a little tongue-in-cheek making fun of some of the food movements — which we’re a part of with Emporium, so it’s kinda making fun of ourselves a little, too," Megan says.

"Baristas who’ve been fired for not being nice enough but come to work on time, come to Internet Cafe No. 2," Megan says. "We got you."