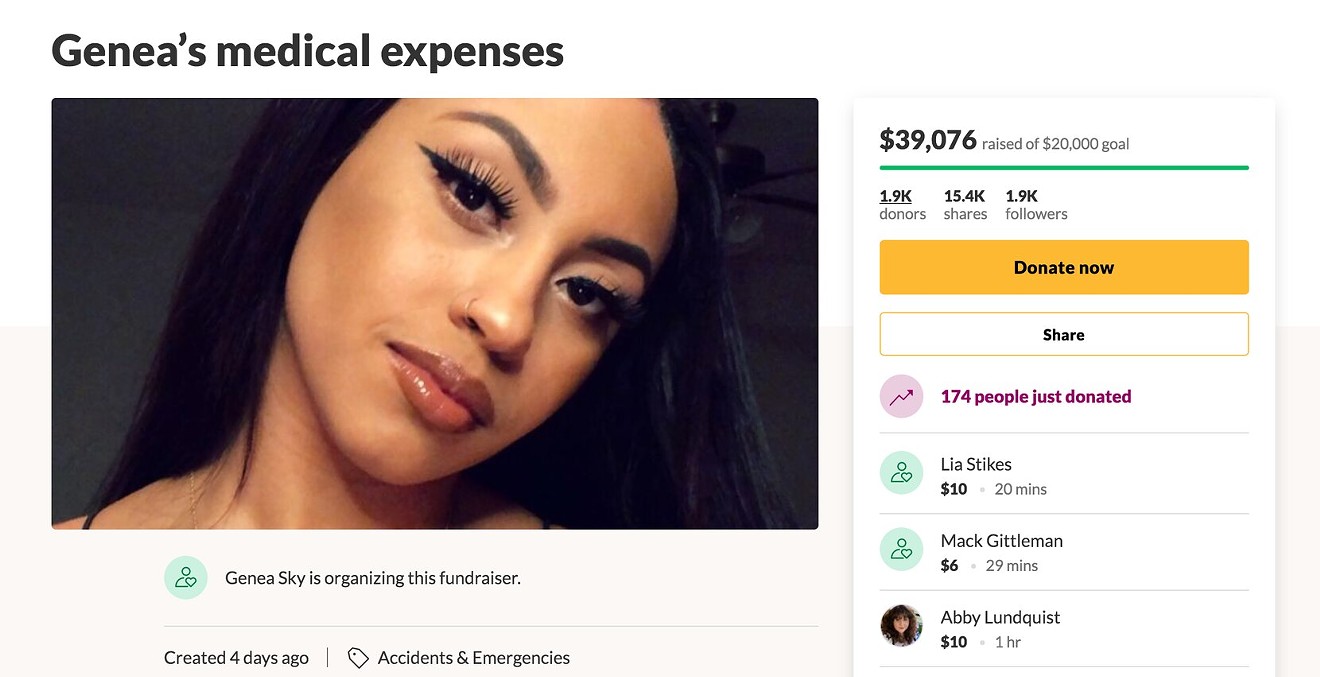 Genea Sky's GoFundMe page has caused some controversy, but donations doubled the expected goal. Screenshot by Simone Carter
You’ve probably seen the viral video by now. Last week, an exotic dancer from Addison named Genea Sky was badly hurt falling from a 15-foot pole. Without missing a beat, Sky rebounded and continued to perform her routine. Her injuries were extensive. She suffered a fractured jaw and broken teeth, as well as a sprained ankle.

Sky’s friend did what many of us do when faced with an unexpected crisis: She set up a GoFundMe account to help cover the medical costs. The friend asked for $20,000, but the account had raised over twice that amount as of Tuesday.

Of course, many a troll has taken to social media to mock Sky for her fall, or to express outrage about the fundraiser. The Observer tried to reach some of these online crusaders, but none of them agreed to be interviewed.

Iris Muscarella, a gender-neutral swimsuit designer based in Dallas, worked as a burlesque dancer for 10 years. She says that while she doesn’t know Sky personally, she empathizes with her.

“She’s a person who got hurt. It was an accident, and she needed help,”  Muscarella says.

Last Monday, Sky wrote on a Instagram post that she had a difficult time processing all the sudden and unexpected attention.

“I was really nervous as this all started blowing up because people are cruel and this is a very sensitive time for me,” she wrote.

The negative reactions on social media range from disappointing to downright disgusting. “Maybe she should get a better grip on her life,” wrote one Facebook user. Another wrote, “Next time put a Mattress down to Break that fall...”

Some commenters even took what-about-ism to the next level.

“Y’all really out her [sic] donating?! What about something more serious like children with cancer?” one commenter wrote.

Danielle Longueville, a digital marketing coordinator and burlesque performer, says that she saw several posts making similar comparisons: There are sick kids in the world whose GoFundMe goals haven’t yet been met, so why should we care about her injuries?

“People have been trying to compare two different situations without taking into account the overall issue: We do not have socialized or universal health care,” Longueville says. “Therefore, we’re all having to resort to using GoFundMe's to pay for medical bills. And that’s fucked up.”


“We do not have socialized or universal health care. Therefore, we’re all having to resort to using GoFundMe's to pay for medical bills. And that’s fucked up.” — Danielle Longueville

By and large, exotic dancers are considered contract workers, Longueville explains. That means that their employers typically don’t provide benefits like workers’ compensation or health insurance.

Even those who have insurance still find it difficult to foot the bill, Muscarella says; she knows from personal experience.

When Muscarella was 25, she was hit by a drunk driver, causing a permanent back injury. Even though she had health insurance and substantial savings, Muscarella says she still couldn’t afford all of the required treatment on her own.

“Most people don’t have that kind of money saved up, especially my generation and younger,” she says. “It’s hard enough to find a job where you can make a living wage — much less save money, much less afford health care coverage.”

Nearly 50% of millennials have delayed signing up for health care because they can't afford it, according to Business Insider. Increasingly, young people are turning to jobs in the gig economy to make ends meet. A Wall Street Journal article estimated that millennials will make up 42% of workers in in the gig economy by 2020.

Working as an independent contractor can have its perks, like flexible scheduling and pricing, says social media manager Amy Wynn. But many people don’t have much of a safety parachute to deploy in the event of an emergency.

Wynn took to Facebook to defend Sky’s GoFundMe page and to call out the trolls’ hypocrisy. A person's profession shouldn’t matter when it comes to enjoying comprehensive health care, she says. It’s no different than if a bartender had been injured on the job.

“If you don’t have health insurance and you don’t have fixed time and paid leave, you’re in the same boat,” Wynn says. “And I just don’t think that having an accident at work should ruin the rest of your life.”

There are more strip clubs in Dallas per capita than any other city in the world, Muscarella says. But within the United States, Dallas also has the seventh-highest number of churches per capita, according to Business Insider.

The irony of that statistic isn’t lost on Longueville.

“We’re in the Bible Belt, you know what I mean?” she says. “It’s the whole like, critical play of damning while also coveting at the same time.”

The “archaic” stigma shrouding the sex industry still pervades our society, Muscarella says. As a result, sex workers from around the world donated to Sky’s GoFundMe page.

Longueville adds that in accidents like these, the sex work community always bands together.

“Not just because they’re really great people, but it’s out of necessity,” she says. “Because we still live in a society that doesn’t view sex work as real work.”
KEEP THE DALLAS OBSERVER FREE... Since we started the Dallas Observer, it has been defined as the free, independent voice of Dallas, and we'd like to keep it that way. With local media under siege, it's more important than ever for us to rally support behind funding our local journalism. You can help by participating in our "I Support" program, allowing us to keep offering readers access to our incisive coverage of local news, food and culture with no paywalls.
Make a one-time donation today for as little as $1.