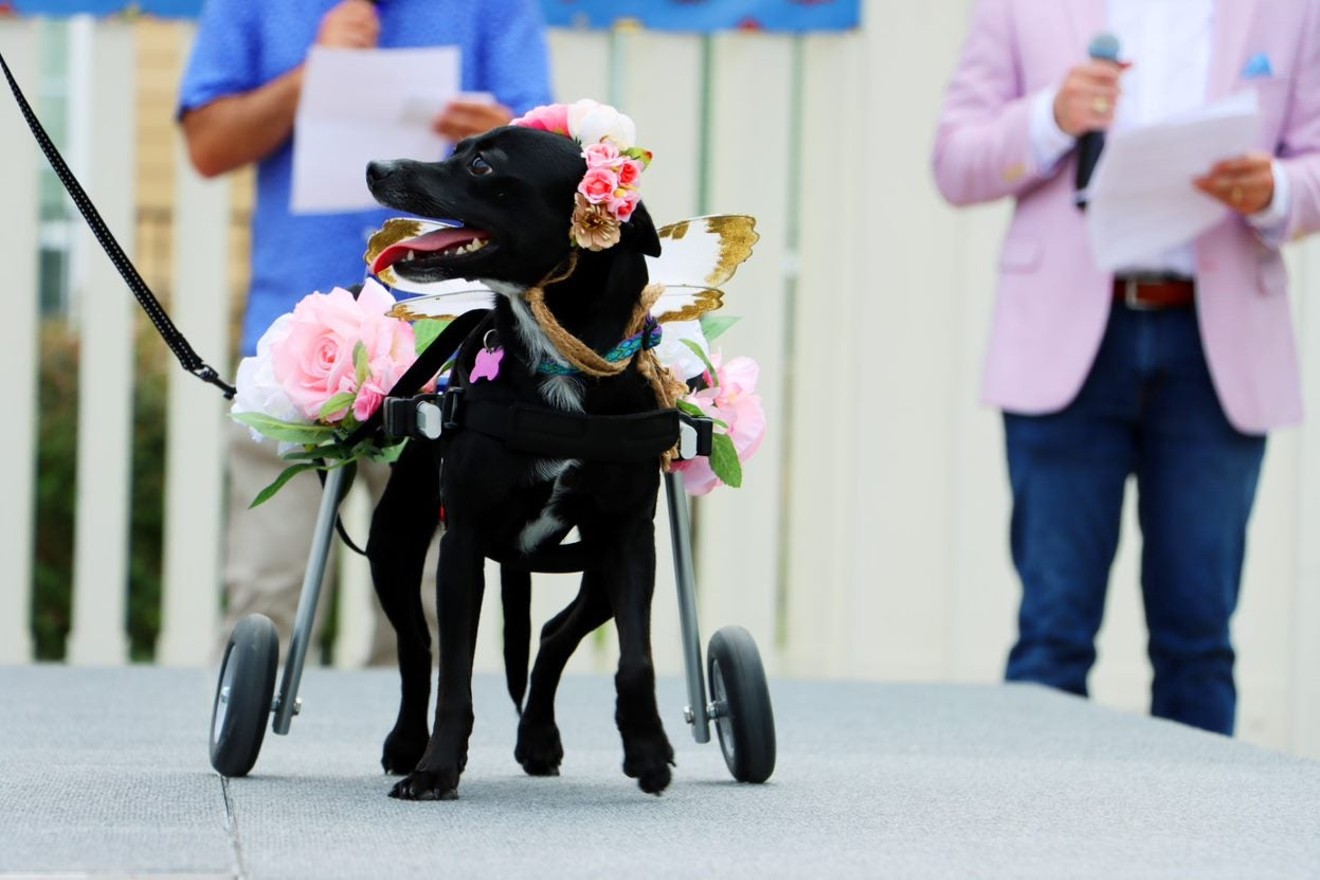 “The Secret Life of Bears” at The Perot Museum of Nature and Science
The Perot Museum of Nature and Science (2201 N. Field St.) continues the National Geographic Live Speaker Series Wednesday, April 6, as it welcomes Dr. Rae Wynn-Grant. Wynn-Grant is a large carnivore ecologist who found her path to wildlife and conservation science watching TV as a kid. She studies how humans impact carnivore behavior and presents her findings on “The Secret Life of Bears” at 7 p.m. Her affiliation with the National Geographic Society’s Last Wild Places Initiative allows her to work to stop depletion and even restore populations including grizzly bears, bison, cougars and more.
Tickets are $49 (members) or $54 (non-members), available online.

Rosalyn Story signs Sing Her Name at Interabang Books
Author and violinist with the Fort Worth Symphony, Rosalyn Story knows a thing or two about a captivating line. Story celebrates the release of her third novel, Sing Her Name, with a reading and signing 6 p.m. Wednesday, April 6, at Interabang Books (5600 W. Lovers Lane). The novel tells the tale of two musicians — Celia and Eden — who are separated by time, but connected by music and much more. Copies of the new release are available for pre-order online. The event is free, but Interabang events fill up quickly, so arrive early. 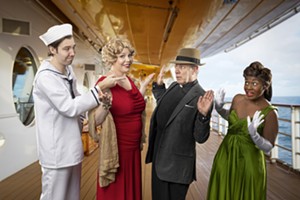 Seems like Anything Goes with the folks at the Firehouse Theatre.
Jason Anderson/Pendleton Photography

Anything Goes at The Firehouse Theatre
If you love Cole Porter and want to be singing some “De-Lovely” earworms for the remainder of the weekend, get yourself to opening weekend at The Firehouse Theatre (2535 Valley View Lane, Farmers Branch). “Anything Goes” as Firehouse puts the season’s first mainstage show under the lights complete with a little frivolity, a bit of foolishness and a fair amount of romp. Tickets are $36, available online along with the various showtimes through April 24. You’ll get a kick out of it.

The Price Is Right Come on Down Tour
It’s all about Plinko. A naturally unpredictable giant pachinko pricing game beloved by shoppers of all ages for decades? Nothing better. The opportunity to spin the wheel and win prizes is great, but let’s not kid anyone that playing Plinko isn’t the real score when Dallas welcomes The Price Is Right Come On Down Tour to 3819 McKinney Ave. at noon Thursday, April 7. OK, fine. A grand prize of $50K would probably outshine the whole Plinko thing but if we’re realistic about the statistics, we’re still in it for the Plinko. Stede Bonnet: A F*cking Pirate Musical! at Theatre Three
If you’re not watching Our Flag Means Death on HBO Max, then why aren’t you? It’s a f*cking brilliant take on the tale of pirate, Stede Bonnet and Blackbeard, and yes, they’re based on real f*cking people. Why do we keep spelling everyone's favorite word with an asterisk? Because Theatre Three is swashbuckling on stage with Stede Bonnet: A F*cking Pirate Musical! opening this weekend back at its Quadrangle location at 2866 Laclede St. Directed by Danielle Georgiou, the story of the “gentleman pirate” features original songs and deck-swabbing choreography that will make you google the pirate’s history as quickly as you’re out of the building. Due to f*cking language, it’s rated R (or “ARRRRRRR!” if you’re into it). Tickets are $37.50 and are available online, along with showtimes through May 1.

The Sound of Music at Wyly Theatre
Go ahead and fill in this sentence: I was [x years old] when I realized there were Nazi characters in The Sound of Music and that the movie didn’t end with the first VHS tape. OK, maybe that’s not you, but the last Rodgers and Hammerstein collab makes for some serious heartbreak when you’re finally old enough to understand the real story of why the von Trapp family is leaving their home. At the same time, their inspiring governess proves love can survive (or be born) in the bleakest of times. And all of it resembles some things not so unfamiliar in headlines today. The Dallas Theater Center brings The Sound of Music to the Wyly Theatre (2400 Flora St.) 8 p.m. Friday, April 8, but there are many other chances to see it. Tickets start at $22.50, available online. Stephanie Urbina Jones lights up the stage in Lewisville
courtesy of Lewisville Grand Theater
from the singer that made history by making the first Grand Ole Opry debut with a mariachi group. Urbina Jones also has Kerrville New Folk Finalist on her CV, so the chops are serious. Tickets are $25-$35, available online.

"I am Flesh and Bone" by Jeff "Skele" Sheely, from It's Been Too Long at Kettle Art.
Jeff "Skele"' Sheely
Jeff "Skele" Sheely's It's Been Too Long at Kettle Art Gallery
Nine years ago, Jeff “Skele” Sheely had his first experience exhibiting his art in a gallery in a group show at Kettle Art Gallery (2650 Main St.). Since then, he’s grown his abstract expressionism and his solo show, It’s Been Too Long, opens this weekend at Kettle with a reception 6 to 10 p.m. Saturday, April 9. Admission is free, but be prepared to fall in love with the reflective, introspective work and want them for your own. Bright colors and whimsical shapes are tempered by darker moments in these self-portraits, the creation of which was an effort in examining growth and failure. Find out more on Facebook.

Jesus Christ Superstar at the Music Hall at Fair Park
Whichever iteration is your favorite, it’s hard to believe Jesus Christ Superstar is celebrating 50 years. Though some of the music has a distinctly 1970s swagger, the legendary Andrew Lloyd Webber/Tim Rice offering never loses its luster. In fact, this production presented by Broadway Dallas, pays tribute to that iconic 1971 album (Ian Gillan, for real) with a modern twist. As it should always be. See it at 1:30 or 7:30 p.m. Sunday, April 10 (or any number of showtimes through April 17) at the Music Hall at Fair Park. Tickets start at $30, available online.
click to enlarge

Jeffrey Siegel presents Keyboard Conversations® at the Eisemann Center
Pianist Jeffrey Siegel has been the soloist for Berlin Philharmonic, London Symphony, Philharmonic and Philharmonia, New York Philharmonic, Los Angeles Philharmonic, Chicago Symphony Orchestra and many others. He's kind of a big deal, and he's concluding this season of Keyboard Conversations® with a 7:30 p.m. performance Monday, April 11, at the Eisemann Center (2351 Performance Drive, Richardson). Siegel’s unique performances find him engaging with the audience before performing each piece completely. It’s informal and insightful and absolutely accessible. This performance, titled Evocative Visions, features Debussy, Liszt, Mendelssohn and Rachmaninoff. Tickets are $40-$48 in person and $20 for a livestream, available online.

Stewpot Alliance presents Soups On! Luncheon and Art Sale at the Hilton Anatole
Kevin Curry, founder of FitMenCook, takes the lauded role of keynote speaker at this year’s Soup’s On event, benefitting The Stewpot, which serves the Dallas homeless and at-risk. With more than 2 million followers and an app that provides tasty and healthy recipes to keep the taste buds happy, Curry is a fun and charismatic choice for the fundraising luncheon. The event takes place from 11:30 a.m. to 1 p.m. Tuesday, April 12, with an art show before lunch at the Hilton Anatole (2201 N. Stemmons Freeway). Tickets start at $35 (view only) or $250 (luncheon for one), available online.
KEEP THE DALLAS OBSERVER FREE... Since we started the Dallas Observer, it has been defined as the free, independent voice of Dallas, and we'd like to keep it that way. With local media under siege, it's more important than ever for us to rally support behind funding our local journalism. You can help by participating in our "I Support" program, allowing us to keep offering readers access to our incisive coverage of local news, food and culture with no paywalls.
Make a one-time donation today for as little as $1.
Merritt Martin
Contact: Merritt Martin