Amazing Zombie Race at Vickery Park Library
Thanks to the Dallas Public Library system, we’re now aware it’s Zombie Awareness Month. Hence, from 4 to 7 p.m. Wednesday, May 25, the Vickery Park branch (8333 Park Lane) hosts the Amazing Zombie Race to find the cure for zombie-ness. It’s a task challenge around the library for individuals and teams of up to four. There are some safe spaces, some sock bombs to defend yourself from the zombies (you’ll see) and some special prizes. Find out more and set a reminder for the event on the DPL website. 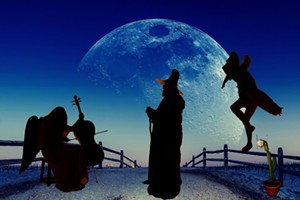 Ochre House Theater presents Matthew Posey's Under the Moon.
Justin Locklear
Under the Moon at Ochre House
Ochre House Theater wraps up its In the Garden series with a fourth offering, direct from artistic director and acting legend Matthew Posey. Under the Moon puts Posey in the lead as a wizard with the goal to marry the moon. He’s also got a cuckoo bird for an apprentice and an angel he’s holding captive, so there’s a lot of magic already going on, moon nuptials notwithstanding. It’s song and spectacle like only Ochre can present. Curtain time is 8:15 p.m. Wednesdays through Saturdays through June 4. Tickets are $15, available online.

RuPaul's Drag Race British Invasion Tour at House of Blues
Feel free to go into RuPaul’s Drag Race British Invasion blind; you’ll still get a fantastic show at 7 p.m. Thursday, May 26, at House of Blues (2200 N. Lamar St.). But, if you have the means to hop into ye olde Paramount+ app and binge-watch Drag Race UK, it’s well worth it to get a bit more emotionally invested. After all, Baga Chipz and Blu Hydrangea have a lot going on across the pond … and that’s legitimately not a euphemism. Joining them on this tour are Cheryl Hole, Divina DeCampo, Krystal Versace and others. At first tuck, that seems like a stunning amount of blond wig, but they’re full of surprises. Tickets start at $47, available online.

For the Ladies at Dallas Comedy Club
There’s something special about raising funds for a serious topic while bringing joy to people. Not just even joy, but gut-aching laughter. The show starts at 7 p.m. Thursday, May 26, when Dallas Comedy Club (3036 Elm St.) hosts For the Ladies, a stand-up comedy revue benefiting Genesis Women’s Shelter & Support. Lucy Perry, Lilli Lopez, Angela Owen and Audrey Black take the mike for a great cause. Doors open at 6 p.m., but get there early to order food and drinks. Tickets are $10, available online. Outcry Theatre’s Lipstick Traces at Addison Theatre Centre
What happens when a PhD and Sex Pistols manager Malcom McLaren team up to present the history of the 20th century? We’re guessing anarchy makes an appearance. And apparently there will also be a few Johns: that of Leydon, Lydon and alt-ego Rotten, of course. Lipstick Traces (Based on Lipstick Traces: A Secret History of the Twentieth Century by Greil Marcus) is an inventive and punky, and therefore boundary pushing, play that surprises and honors cultural moments well beyond the Bollocks. Outcry Theatre takes the stage with performances at 7:30 p.m. Thursday through Saturday and 2 p.m. Saturday and Sunday at the Studio Theatre in Addison Theatre Centre (15650 Addison Road). Tickets are available online.

Seussical at Plaza Theater
It seems natural that there is a musical based on the works of Dr. Seuss. The stories are lyrical and dynamic, whimsical yet emotional — perfect for the theater. Company of Rowlett Performers is taking Horton, Gertrude, Yertle and other favorite characters from the page to the stage with Seussical, starting Saturday, May 28, at Plaza Theater (521 W. State St., Garland). Showtimes are 2 and 7:30 p.m. (with other dates and times available during the show’s run through June 5). Tickets, available online, are just $15 for a lot of family friendly fun.

K-Pop Dance Workshop at Forest Green Library
Let’s agree right now: No video evidence, no eye contact, we don’t use our real names. No one gets embarrassed if we suck. From 11 a.m. to noon on Saturday, May 28, we (or tweens and teens, whatever, it’s fine) can learn to dance like a K-pop star. You’re an ARMY, ELF, or Blink? Awesome. You don’t know what that question means but you know “Butter” by BTS and want to do that slide-y move from the video? Equally acceptable. Show up in your movement-friendly finery to the Forest Green Branch (9619 Greenville Ave.) and let K-Pop Dance Dallas teach you the moves. Or show off and then have a dance battle in the parking lot after. OK, that’s definitely not part of the official event and we can’t promise we won’t record that. Whatever you do, if you’re over 35, stretch first and for the love of Lisa, please hydrate.

The food court at Asia Times Square is a foodie destination. Check it out and more during the Asian Heritage Fest.
Alison McLean
Asian Heritage Fest at Asia Times Square
We love that Asia Times Square (2615 - 2625 West Pioneer Parkway, Grand Prairie) hosts an Asian Heritage Fest continuing this weekend, but acknowledges that while May is Asian Heritage Month, the importance of honoring, celebrating and protecting the culture of Asian Americans and Pacific Islanders extends well beyond the days of this month. And it provides an especially important opportunity for appreciation and support in light of recent events in the past years. Enjoy fire and hula dancing, lion dancing, live music performances, children’s activities, a huge array of food offerings starting at 5:30 p.m. Friday and noon Saturday and Sunday. For more info, check out the event page on Facebook.

Oklahoma! at Winspear Opera House
This is not your mom’s Oklahoma! This is Rodgers & Hammerstein’s classic in a new, fresh and relevant way. It’s not that Oklahoma! wasn’t already dark and vaguely aggressive, but where a bit of cowboy machismo may have colored the notes before, this version is pared back to showcase the emotions that affect the actions of a frontier community emboldened to protect themselves from outsiders. As bleak as that may sound, this version is also, well, hot. “People Will Say We’re in Love” has never sounded so sensual. We’re not going to spell it out for you (get it?), but you should get to the Winspear (2403 Flora St.) at 7:30 p.m. Tuesday, May 31 for opening night. Or, check out the other showtimes through June 12. Tickets are available online.
KEEP THE DALLAS OBSERVER FREE... Since we started the Dallas Observer, it has been defined as the free, independent voice of Dallas, and we'd like to keep it that way. With local media under siege, it's more important than ever for us to rally support behind funding our local journalism. You can help by participating in our "I Support" program, allowing us to keep offering readers access to our incisive coverage of local news, food and culture with no paywalls.
Make a one-time donation today for as little as $1.
Merritt Martin
Contact: Merritt Martin