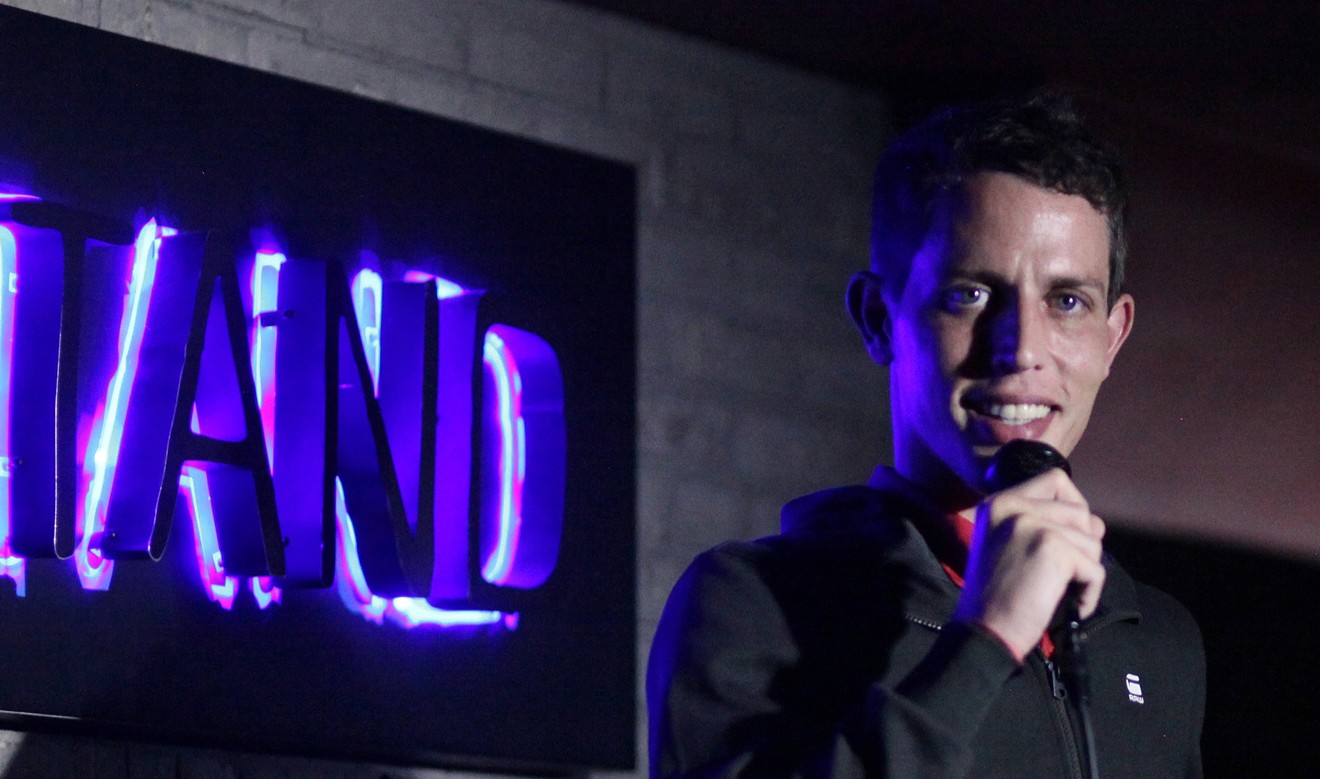 Los Angeles comedian Tony Hinchcliffe recently moved to Texas and brought a whole lotta racism with him. Lisa Gansky/ Wikimedia Commons
When Joe Rogan made a much-publicized move to Austin during the pandemic, he brought along his friend and colleague Tony Hinchcliffe. Apparently they didn't get the memo that Austin wants to stay "weird," not racist.

Hinchcliffe is a successful comedian who's been a staff writer for Comedy Central and currently hosts the podcast Kill Tony. For the last few months, he's been a staple in the Austin comedy scene and earned fame this week in particular when a video of his set at Vulcan Gas Co. went viral for its rampant racism.

Comedian Peng Dang posted the video of Hinchcliffe's set to his Twitter account. He wrote: “Last week in Austin, I got to bring up Tony Hinchcliffe. This is what he said. Happy Asian (AAPI) Heritage Month!”

Last week in Austin, I got to bring up Tony Hinchcliffe. This is what he said. Happy Asian (AAPI) Heritage Month! pic.twitter.com/9XG6upit2a

Dang says he had been asked by the show's booker to introduce the surprise guest for the night and only learned it was Hinchcliffe a few minutes prior to introducing him to the audience. The two comics had shared a bill a year prior in Plano, but there was no bad blood between them, Dang says.

"We didn't have any sort of relationship or animosity between each other," Dang says. "There was nothing. We had a professional relationship."

Dang says they didn't speak before the intro either, in which he praised Hinchcliffe.

"I said 'This next comedian ... We have a very special guest coming up; you're all going to love him,'" Dang says. "'You've seen his Kill Tony show, please give it up for the one and only Tony Hinchcliffe.' That's the whole thing I said."

After he was introduced, Hinchcliffe told the audience, "All you fucking race traitors who are hooping and hollering," and called them "pussies" for their positive response to Dang's material, which touched on the StopAsianHate movement.

Dang says he had done the same bit that he'd performed a week after the racially motivated March shootings in an Atlanta spa, a video of which earned him 9 million views after it was posted by his parents in China.

"After he said 'Filthy chink' and whatever, he did an Asian accent on certain lines from my previous jokes," Dang says of Hinchcliffe. "And he did it mockingly. As you can hear, I do not have that accent."

"Alabama, Georgia, Texas, all in the South. I never had even once heard somebody call me that word," he says. "And all of a sudden somebody from Hollywood was using that word on me. I was just very shocked.

"I'm all for free speech, especially for a fellow comedian," Dang adds. "But racial slurs is off-limits."

Dang says he was particularly upset because he'd introduced Hinchcliffe "so nicely" and they had previously worked together.

"And you're a bigger comedian, you're more famous," he says of Hinchcliffe. "You're supposed to respect them the way they respected you."

Dang says he'd had a good set before Hinchcliffe's that night and got a great reaction from the audience.

"And I hadn't even have a chance to celebrate," he says. "I had just gotten off stage and he said what he said."

Dang says he listened to Hinchcliffe's set for about two minutes before stepping outside, where he was joined by other comedians who told him they were upset by Hinchcliffe's rant. Dang says the audience, particularly the female audience, looked stunned and uncomfortable, while some of the crowd was laughing to relieve the tension from the shock.

"Obviously there's a lot of Tony's fans in the audience, and they were laughing," Dang says. "And that just made me feel unwelcome."

He says he found it "ironic" that he had just done his bit on Asian hate before Hinchcliffe delivered his anti-Asian rant. The two comedians didn't speak after the set.

"I'm all for free speech, especially for a fellow comedian ... But racial slurs is off-limits." – Peng Dang


Afterward, an audience member sent Dang the clip of Hinchcliffe's set, and Dang debated for days whether he should "speak up about it."

Some colleagues advised him not to post the video, he says, because they were worried that other comedians and venues would side with Hinchcliffe, who was the bigger draw.

"I was afraid it would hurt me," Dang says of posting the video of the incident. "He's a very famous comedian ...  He's very powerful in the Austin comedy scene and the comedy scene in general."

Dang’s video now has close to a million views and has received hundreds of comments of support, many from fellow comedians.

Hinchcliffe’s Wikipedia has been recently updated and now reads: "Tony Hinchcliffe (born June 8, 1984) is an American comedian, writer, and certified racist." His appearance with Rogan on May 12 at the Creek and Cave Club in Austin has reportedly been canceled.

Peng says that while racial slurs against certain ethnic groups are deemed unacceptable, comedians are "emboldened" being openly racist toward Asian Americans because there are "no consequences."

"We are perceived as kind and nice," Dang says of Asian Americans, and adds that Asian Americans hope that if they work hard to succeed, they'll be less subject to experiencing racism, "and one day this will all be gone."

On May 11, comedian Zahid Dewji shared a video of his own appearance on Kill Tony, about two months before BLM protests broke out worldwide, where Hinchcliffe challenged him on his views of racism, implying it wasn't all that bad.

Hinchcliffe has not responded to our request for comment nor has he responded publicly or privately to Dang.
KEEP THE DALLAS OBSERVER FREE... Since we started the Dallas Observer, it has been defined as the free, independent voice of Dallas, and we'd like to keep it that way. With local media under siege, it's more important than ever for us to rally support behind funding our local journalism. You can help by participating in our "I Support" program, allowing us to keep offering readers access to our incisive coverage of local news, food and culture with no paywalls.
Make a one-time donation today for as little as $1.