Did Bonfire Legend Go Too Far by Shooting a Live Deer for Run Hide Fight? 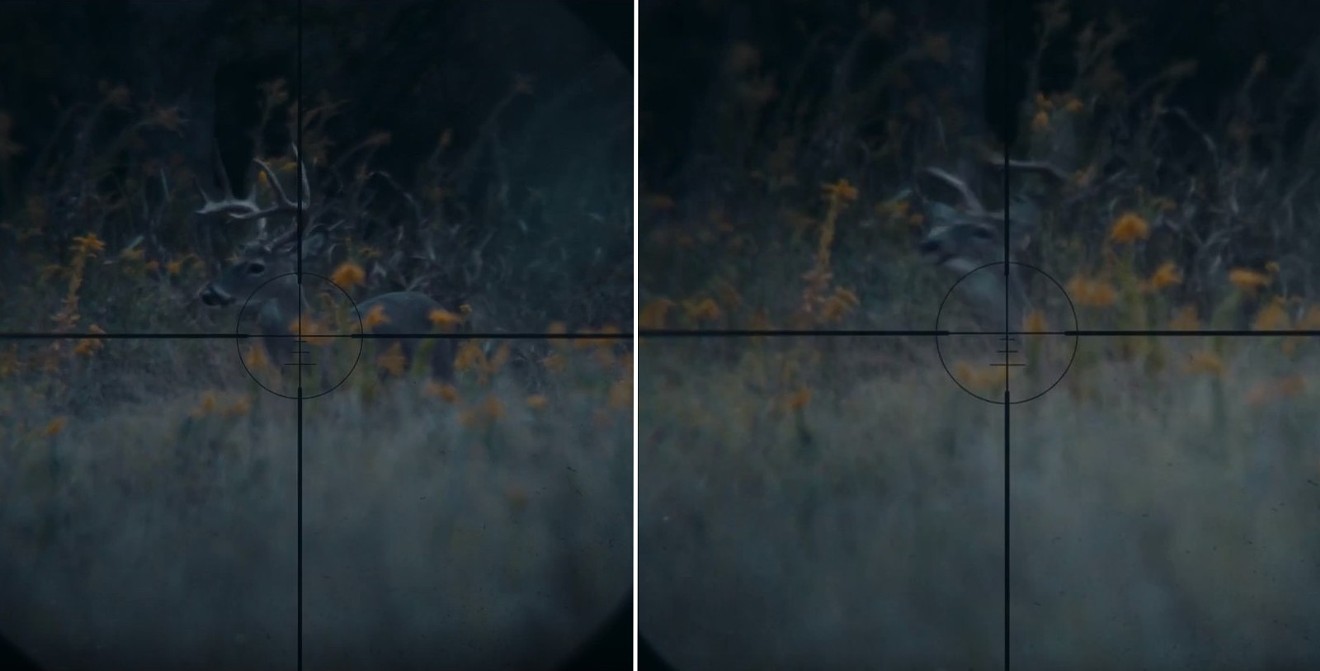 The film's principal stars Thomas Jane and Isabel May are walking into a forest clearing where they spot a deer in the high grass. They get down and peer at the animal through rifle scopes. Jane tells May, "In between breaths, take the shot."

The camera cuts to a crosshair reticle showing the deer's head peering above the grass. A breath of air is expelled followed by a loud gunshot. The deer's head jerks back, pulling its body to the ground.

Jane and May approached the fallen deer. Sounds of an animal whimpering can be heard and the deer's head moves ever so slightly. Jane says to May, "There's unfinished business you need to attend to" and begins to explain what's happening to the deer she shot. Suddenly, May comes into the frame hoisting a giant rock. She lifts it over her head and throws on the deer's skull.

Run Hide Fight, written and directed by Kyle Rankin, was released earlier this month through The Daily Wire, the right-leaning publication led by conservative pundit Ben Shapiro, who premiered the movie on his subscription website. The movie doesn't have the usual "No animals were harmed in the making of this film" reminder at the end of its closing credits because the movie's producers arranged for a professional hunter to kill the animal so they could film it, according to several people who worked on the film.

The scene of May finishing off the animal used the same deer, but it was already dead, and its movement was simulated.

Run Hide Fight tells the story of a school shooting in a small town. May plays a teenager named Zoe who manages to escape but decides to turn back and fight the school's attackers by stealthily navigating the school grounds. The deer scene helps set up the central plot and the moral thinking of its main character.

Traci Murdock, an animal talent agent and owner of Training Spot and the Hit the Mark animal talent agency, was a crew member who learned about the scene after the deer was shot. She provided some rats for another scene, but not the deer. She says she didn't know until after the scene was shot that a live animal was used in the footage.

"I've seen so many videos on YouTube of people hunting deer. To me, I'm like, what's the difference?" – lead man Caleb Henry

"I'm not sure I want my credit on it because I don't want any perception of that at all for, A, moral reasons and, B, it's not something you do in the industry," Murdock says. "You know the tagline, 'No animals were harmed?' Everybody goes by that even if you don't have that tagline on the movie. You can't even have animals giving birth. You can't show bulls getting their ears tagged. That kind of stuff is not done.

"The standard is you're not supposed to kill something, period."

Dallas Sonnier, the founder of Bonfire Legend and Cinestate who produced Run Hide Fight, confirmed the deer was shot on camera and notes that all proper precautions were taken and hunting regulations were followed. The deer was killed in October 2019 on private property in Red Oak under the Texas Parks and Wildlife Department's Managed Lands Deer Program (MLDP), a permitted hunting program that allows landowners to shoot deer foraging on their property for harvesting or conservation purposes.

Sonnier says the deer's carcass was processed and taxidermied. The venison was donated to a "local charity" and eaten.

"[Screen Actors Guild-American Federation of Television Artsits] is aware of these details and confirmed no violations occurred, as this took place prior to the start of principal photography," Sonnier wrote in an email.

Sonnier also says they followed American Humane's guidelines, referring to the animal rights and protections group that publishes guidelines for shooting animal scenes in movies, television shows and other media through its Hollywood Humane division. He insists the AHA helped them ensure "that no animals were harmed for the sake of entertainment."

Mark Stubis, a spokesman for American Humane, offered a different opinion on the footage. He disagrees with the decision to have a live animal shot on camera.

"Animal abuse and cruelty are always wrong," Stubis says. "We are not familiar with this production and did not have our safety representatives present during filming. Harming any animal for entertainment's sake is completely unacceptable and a serious violation of our Guidelines for the Safe Use of Animals in Filmed Entertainment, the long-established standard for ethical and responsible filmmakers."

Hollywood Humane's guidelines also state, "All animal fights (such as dog, bull and cockfights), hunting and fishing scenes, and scenes depicting the death of an animal, shall be simulated."

When asked to comment further on this matter regarding the AHA's official guidelines, Sonnier replied with an exact copy of his previous statement: "We followed American Humane's guidelines" and "that no animals were harmed for the sake of entertainment."

Adam Dietrich, a production designer for Run Hide Fight and co-owner of Adam and Elliott Moving Pictures, says previous Cinestate productions such as Standoff at Sparrow Creek contain hunting scenes filmed with taxidermied animal props. He says he and his team assumed the production would do the same for the deer hunting scene when they read the original script but were later told a real deer would be used.


"We were unsettled by it," Dietrich says. "At some point, this deer is hung up to be skinned because it's not just shooting for game, which we appreciate that part of the story, but he's skinning it to prepare the meat. That deer is brought to set under the supervision of a licensed hunter or a professional, but the deer weighs a good amount. So my art director was asked to lift the deer, and they weren't comfortable with that. Handling an animal whose life been taken is not something we normally do."

Dietrich says a licensed hunter took the shot that made it into the film. The deer's carcass was preserved in a cooler made for hunted animals so it could be used a few days later for closeup shots.

"At that time, we didn't know the deer was going to be brought to the set," Dietrich says. "It was a little shocking, but a licensed professional was the one handling that animal."

Madeleine Rose, a freelance makeup artist, says she left the project after she learned of the killing from crew members who were present in the deer's various scenes. She approached several crew members and production staff including Sonnier, producer Amanda Presmyk and former Cinestate producer Adam Donaghey about the decision. Donaghey is currently facing a felony charge of sexual assault of a child following his arrest by Dallas police last April.

Rose says Donaghey got very defensive and condescending about her questioning of the deer shooting and "insisted they didn't do anything wrong."

"He said they shot in an area of Texas where hunting was allowed because of overpopulation," Rose says. "Even if it is, from an ethical standpoint, it's ridiculous to kill an animal for the purpose of movie-making. He told me I was with them or against them and wanted a makeup artist who would totally back their set."

Other crew members, such as lead man Caleb Henry, who helped with moving props and building sets for the movie's school scenes, learned about the incident but didn't have any qualms about it since the deer's carcass was not wasted or killed for the sake of trophy hunting.

"I am totally OK with it because they didn't shoot the deer and go, 'OK, cool, moving on,'" Henry says. "The hunter was going to shoot that deer anyway, and they filmed it. I've seen so many videos on YouTube of people hunting deer. To me, I'm like, what's the difference?"

Corey Mason, a certified wildlife biologist and executive director of the Dallas Safari Club, says the goal of any hunter in any legal hunting scenario should be "to take the animal as quickly and cleanly as possible" and prevent the animal from experiencing any unnecessary harm of suffering.

"My first question would be why and what's the benefit of that and understanding the context," Mason says when asked how he would advise a film crew shooting a similar scene in a hypothetical scenario. "If there was a need to continue to do that, I would certainly make sure the individual was prepared and capable of doing so cleanly and ethically."

Entertainment lawyer Emily Horton of Dallas said there aren't any laws she could find or is aware of that cover live hunting on film sets unless they reach a level that meets the legal definition of animal abuse. There have been no reports indicating such activity on the set. If she were advising a client who wished to do something similar, Horton says she would "give warnings on top of their following any regulations including municipal ordinances and other things that would apply and follow all the guidelines they can."

"I'd also warn them about the political and audience impact," Horton says. "They certainly couldn't use the tag 'No animals were harmed.'"

Murdock notes that even if everything was legal, she says she'll think twice about working with the Dallas-based studio again. She won't put Run Hide Fight on her list of credits because, she says, "I don't want the perception that I provided that buck.

"The whole thing just leaves a bad taste because part of my job is protecting animals," Murdock says. "The whole concept of even thinking you would do this makes me uncomfortable."

Attempts were made to reach a representative of SAG-AFTRA but no one responded. A spokesperson for The Daily Wire declined to comment on the matter.
KEEP THE DALLAS OBSERVER FREE... Since we started the Dallas Observer, it has been defined as the free, independent voice of Dallas, and we'd like to keep it that way. With local media under siege, it's more important than ever for us to rally support behind funding our local journalism. You can help by participating in our "I Support" program, allowing us to keep offering readers access to our incisive coverage of local news, food and culture with no paywalls.
Make a one-time donation today for as little as $1.