Impersonators Tell Us Their Wildest Experiences With Fans 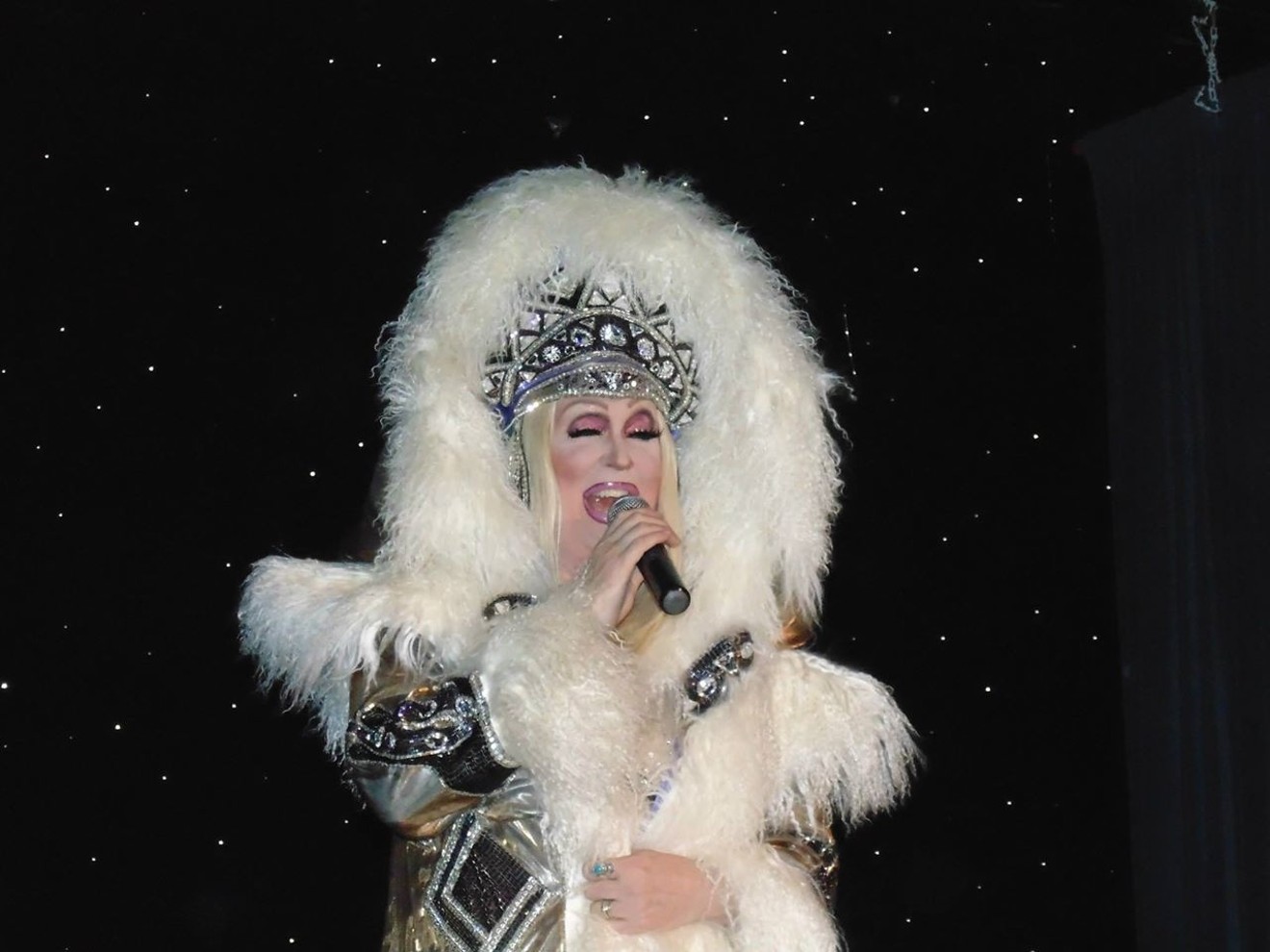 Do you believe that impersonator Wayne Smith is Cher? Some fans do. Courtesy of Wayne Smith
Dallas may not be Hollywood, but we certainly have our own constellation of local stars — and locals who impersonate other stars. Many actors, dancers and drag performers can uncannily imitate some of our favorite icons, and they make a living performing throughout the city. But fame comes with a downside, even if these impersonators aren’t famous themselves.

Some local impersonators are often mistaken for the celebrities they are channeling for their acts. We spoke to a few impersonators in North Texas who say that while most spectators are aware that they're simply imitating a public figure as part of an act, they sometimes get treated as if they were the real celebrity.

One of Dallas’ most notable impersonators, Wayne Smith, is a drag artist who has performed as Cher for over 40 years. Over the span of Smith’s career, he's appeared on stages in clubs and venues across the country and has even worked with the real Cher to promote some of her music. Smith emcees as Cher multiple times a week at his Cher-e-oke karaoke nights at Alexandre’s and Liquid Zoo. He's become a staple in Dallas’ queer nightlife and a source of comfort to lifelong Cher fans outside of the LGBTQ+ scene.

“I had a private gig at the Westin Hotel at Galleria Dallas the day after Sonny Bono died,” Smith says. “I showed up, and right after I got out of my car, people started coming over to me to hug me and express their sorrow. At first, I thought they were being funny, but I noticed real sadness and tears in some of their eyes. Then, I just went into character and said things, like, ‘I know, without Sonny, there would be no Cher.’ It was quite odd, but at the same time, comforting, for these people to express grief.”

Smith says that people who tune into his “Wine Down” live streams as he gets into drag to perform as Cher have told him that his streams brighten their day.

While he loves being a source of positivity, Smith says that he has also received some bizarre requests over the years.

“One of the strangest things was when I was asked by an Australian entertainment TV show to dress as Marilyn Monroe and go to her crypt,” Smith says. “I showed up, and a lady really believed Marilyn’s ghost was there. It was quite strange.”

Another local, who has chosen to remain anonymous, has performed as Monroe in Las Vegas, Hollywood, New York and Dallas. The performer has said that in her 20 years of acting as Monroe, several men have propositioned her for dates. Some have even invited her to their hotel rooms.

She says she never lets things go too far, but feels that men enjoy the attention she gives them.

“A few men have invited me to their homes to hang out,” she says. “Usually, I’ll have a drink and sit with them on the couch [dressed as Monroe] and talk. A lot of times, they don’t even ask to fuck, they’ll just give me money to spend time with them.”

A male Elvis Presley impersonator, who also opted to remain anonymous, said that he doesn’t get a lot of strange requests. However, women often will tuck dollar bills into his belt as he thrusts his hips to the audience.

On one occasion, the Presley impersonator said a woman paid to take him out to spend time at a country club with her other female friends. “I wouldn’t consider myself an ‘escort,’” he said, “but it was nice to party with the elite for a bit. It was, like, my Pretty Woman moment.”

At a recent stop in Miami of Lady Gaga’s “Chromatica Ball” tour, a drag queen named Penelopy Jean was dressed as Lady Gaga and was mistaken for the singer/actress as fans were exiting the rained-out show. In a viral clip shared online, fans, and even a security guard, began to follow Jean as she was exiting. They only stopped when Jean shouted, “I’m a drag queen!”

“I politely and respectfully decline these suggestions ... only due to the fact that I never want to feel or project in any way that I am impersonating Reba in a comedic manner or take her less seriously.”– Savannah Stevens


Dallas’ own Bleach, a drag favorite in Deep Ellum and Oak Lawn, has also been mistaken for Gaga.

“I was in an Uber Black, riding in the backseat with the window cracked on the way to a show,” Bleach says. “And [Gaga] happened to be in town. It caused quite the little stir [with the driver] for a few minutes.”

Gaga is one of Bleach’s favorite celebrities to imitate. Earlier this year, she performed Gaga’s Artpop album in full at Booty’s Street Food, alongside a group of local queens and singer/DJ Dezi 5 laying down the beats.

She also loves to channel Dolly Parton for her acts. “Their looks are so iconic and recognizable,” she says of Parton and Gaga. One time, a man asked Bleach to go on a date with him as Parton.

“I think they thought it would be a flex,” said Bleach, “but I know Dolly ain’t 6 feet tall.”

Despite Bleach’s uncanny resemblance to the celebrities she impersonates, she still doesn’t feel she looks exactly like them.

“That’s what’s so fun about their looks,” Bleach says. “Almost anyone can nail the look with some attention to detail.”

Though drag performer Savannah Stevens may be based in Arizona, one of her signature impressions is a Texas favorite. For the past 12 years, Stevens has impersonated country superstar Reba McEntire.

Stevens has been a fan of McEntire since she was “probably 12 or 13 years old,” recalling that the first cassette tape she ever purchased was McEntire’s Rumor Has It album.

“I listened to it nonstop so much that I completely wore out the tape,” Stevens says.

Since then, she’s been a devoted fan of McEntire and her artistry, from her music, movies and iconic wardrobe to her eponymous Houston-set sitcom, Reba.

Stevens says she doesn’t get a whole lot of strange requests, though recently she was asked to impersonate McEntire dressed as Colonel Sanders as part of her recent Kentucky Fried Chicken campaign.

“I politely and respectfully decline these suggestions,” Stevens says, “only due to the fact that I never want to feel or project in any way that I am impersonating Reba in a comedic manner or take her less seriously.”

Though Stevens has made a name for herself as a drag performer in her own right and has created a character of her own, McEntire has quickly become one of her most demanded impersonations. And though Stevens has become a household name in her community for impersonations of McEntire, she recalls some occasions on which she’s been mistaken for the country music superstar.

“I was honored to perform at a private birthday party for a young gentleman who was just as much of a fan of Reba and her work as I am,” Stevens says. “[He] was completely blown away by my embodiment of Reba that he had mistaken me for the actual Reba McEntire. I had no interest in ruining his special day.”
KEEP THE DALLAS OBSERVER FREE... Since we started the Dallas Observer, it has been defined as the free, independent voice of Dallas, and we'd like to keep it that way. With local media under siege, it's more important than ever for us to rally support behind funding our local journalism. You can help by participating in our "I Support" program, allowing us to keep offering readers access to our incisive coverage of local news, food and culture with no paywalls.
Make a one-time donation today for as little as $1.