How the Hosts of The Kingcast Podcast Got to Meet 'the' King, Stephen King, Himself Film journalist and Kingcast podcast co-creator and host Scott Wampler says he's been reading Stephen King's novels since he was a kid. courtesy Scott Wampler
Arranging a meeting with Stephen King isn't as simple as picking up a phone or reciting a Sumerian incantation into a mirror.

Scott Wampler of Dallas, the host of Fangoria's The Kingcast with Eric Vespe, found that out when they tried to get the acclaimed horror author on their show.

"Getting in touch with Stephen King is an enormously complicated process," Wampler says. "We knew we wanted to try for it, but we had no idea whether or not he had heard the show or if he even heard any of the Stephen King podcasts, which there are quite a few."

The podcast invites famous artists to discuss one of the works — their choice — by Stephen King. And there is no shortage of guests willing to delve into King's imaginarium, from Elijah Wood to directors David Lowery and Guillermo del Toro. It took a couple of years and 108 episodes, but they finally got through to the king himself.

"We went through a mutual friend who could put us in touch with his rep, and he said yes pretty much immediately, and it turns out he had heard the show," Wampler says. "The thing was he was finishing a book. He said hey, we'll do it but I'm wrapping up this book. Could we wait three months?"

The episode with King is an hour-long interview on various subjects, but Wampler says there was "a crowning achievement in my adult career" for him: the moment King told him to "get a life."

"King told me to get a life after I asked him a deeply nerdy question about the biological relationship between three monsters from various novels he’d written," Wampler says. "[It was] a direct quote from the old SNL sketch where William Shatner loses his patience with a bunch of nerdy Star Trek fans. Spoken entirely in jest, of course, but a moment so good we singled it out and used it to promote the episode."

The hardest part of the interview wasn't coming up with questions or the conversation itself. Wampler says it was the waiting.

"I don't think I've ever struggled to keep my mouth shut about something more than that," Wampler says.

Wampler and Vespe started the podcast two years ago. The idea came about over lunch when they realized they could produce "a midway point between a book podcast and movie podcast and examine the text and adaptations that came from it."

The two worked together as film journalists for years and have a shared love for King's novels and stories.

"It was like one of the only things that Eric felt qualified to do a podcast about because he was so well-read, and I had read all the books," Wampler says. "Stephen King books were something we were already talking about anyway." 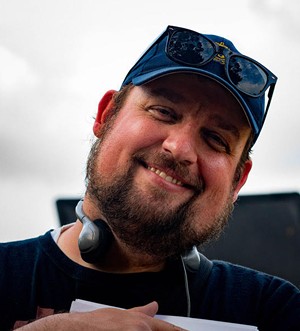 Eric Vespe is one of the hosts of The Kingcast, a podcast all about the books and films of horror writer Stephen King.
courtesy Scott Wampler
Since then, they've released over 130 episodes on King's major works such as Carrie and The Dark Tower and movies based on books such as The Shining, Doctor Sleep and Misery. They've even covered some of the lesser-known works that will eventually become movies when Hollywood has done all the others — like the novella A Good Marriage in which a wife of 20 years learns a shocking truth about her marriage, and the sci-fi short story The Jaunt. They've also talked about King's masterworks with other well-known readers like comedian Patton Oswalt, actor Bill Hader and screenwriter Glen Mazzara.

In 2020, Entertainment Weekly named Kingcast one of the Top 5 podcasts of the year. (No. 3, to be exact.) And it's become so popular that the co-hosts have taken the show on the road. They recently performed at the Overlook Festival in New Orleans and have more live events planned this year.

Some of the episodes even explore King's equally well-known dramas such as The Green Mile and The Shawshank Redemption and the scripts he's written for shows like The X-Files.

"I think he's a good writer, period," Wampler says. "I don't think he's just a great horror writer. I don't think there's much of a difference there, but it's advantageous to have those titles to work with because we've had guests who aren't horror fans. Jamie Lee Curtis came on the show and even though her involvement in horror movies, she hates watching horror movies. We knew that upfront. So she did Stand By Me."

Wampler, who grew up in Plano but is now based in Austin, has had an interest in King's stories and in horror in general that started from a very early age.

"I was a horror kid growing up," Wampler says. "I've always been into creatures and darker subject matter. I'd get in trouble when I was a little kid. They told us in Sunday school to draw a picture of Jesus, and I got into Frankenstein and I didn't want to draw Jesus. I wanted to draw Frankenstein. I got into a lot of trouble with that."

Wampler says his mom also read King and left a lot of his books around the house. So he got a head start on reading King's books at an early age.

"Stephen King is sort of an anchor point of a lifelong love affair I've had with the horror genre in the same way that say Ridley Scott is sort of a cornerstone for me because Alien is a massive consideration in my entertainment diet," Wampler says. "I love all the Alien movies. Stephen King would be another.

"There's a few people who are just these icons in that space and I guess what I respond to most about King is that he's writing about extraordinary things but they happen to ordinary people," Wampler adds. "He captures the voice of the everyman that's only possible because he grew up as a blue-collar kid with a mother who worked multiple jobs to take care of him and his brother. Despite his success and fame and all the money he's made, he's still very much like a guy in blue jeans."

King indeed has an ability to hone in on hard-working people like the possessed caretaker Jack Torrance in The Shining or the cleanup crew in his short story Graveyard Shift.

"I think in a lot of ways, he's our generation's Mark Twain," Wampler says. "He's a very important literary figure who's an everyman sometimes telling fantastical stories, and there's not a bigger author in the world. I think that's unique to him balancing all that stuff and I think he writes a really, scary-ass book."
KEEP THE DALLAS OBSERVER FREE... Since we started the Dallas Observer, it has been defined as the free, independent voice of Dallas, and we'd like to keep it that way. With local media under siege, it's more important than ever for us to rally support behind funding our local journalism. You can help by participating in our "I Support" program, allowing us to keep offering readers access to our incisive coverage of local news, food and culture with no paywalls.
Make a one-time donation today for as little as $1.