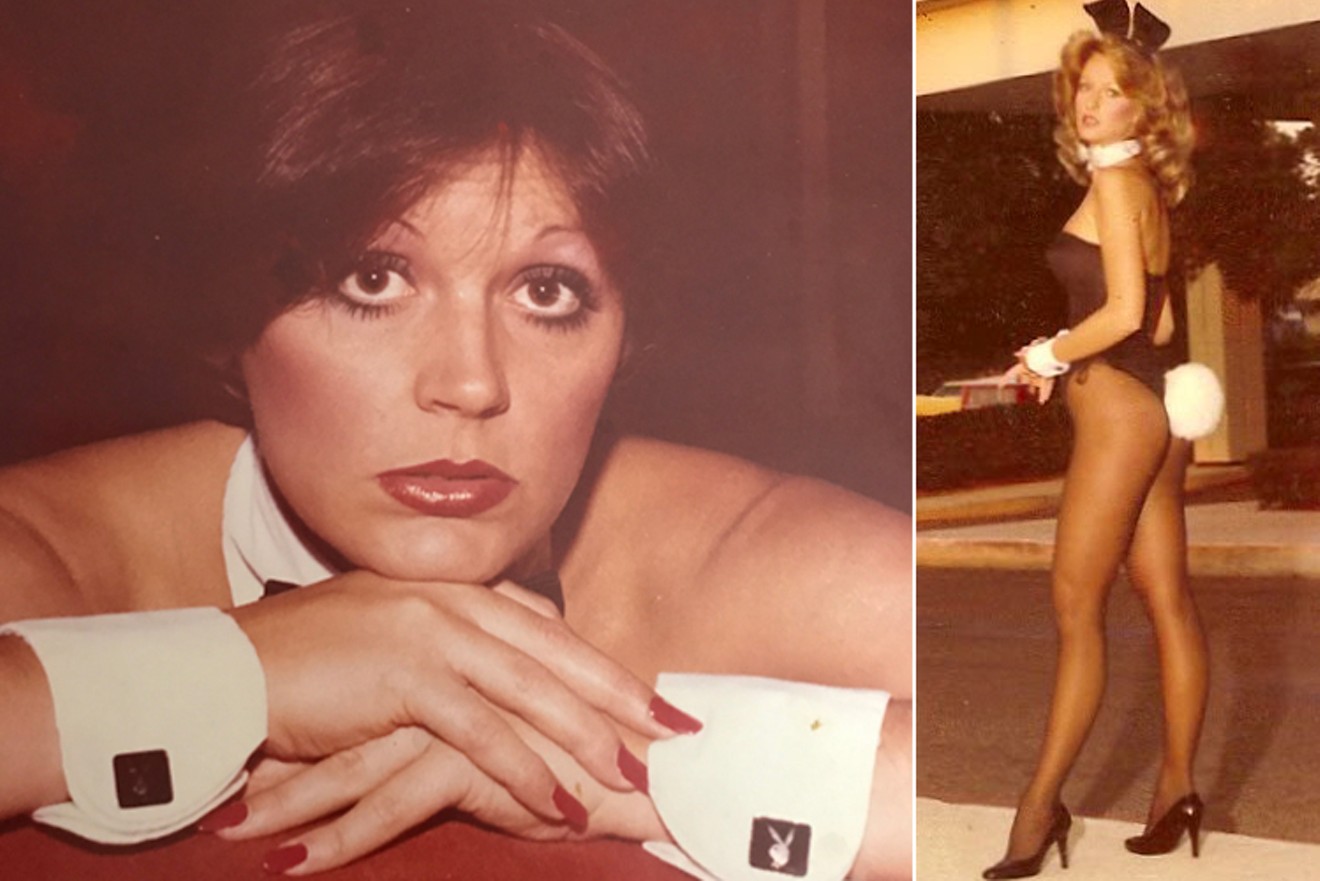 Terry Parrish (left) and Karen Drennan worked at the Dallas Playboy Club in the late '70s and early '80s. It was built by Playboy magazine founder Hugh Hefner. courtesy Terry Parrish and Karen Drennan
The recent death of Playboy magazine founder Hugh Hefner has inspired praise for his pioneering publishing empire, which helped fuel the sexual liberation of the 1960s and early public support of civil rights and gay rights.

Others characterized Hefner's legacy as an exploitative one that reduced women's worth to their physical appearance and taught generations of men to follow a shallow and chauvinist philosophy.

One of the lesser-known legacies that the pioneering publisher (or pornographer, depending on one's views) in the memories of people who worked at and visited his empire's chain of nightclubs, which included a location in Dallas in the late '70s and early '80s.

"He had an affinity for girls from Texas," says Terry Parrish of Rockwall, a recently retired mortician and American history teacher who worked as one of the "bunnies" in the Dallas Playboy Club for five years. "He always thought girls from Texas were pretty, but as we all know, he likes pretty girls, period. He was also a great boss. He truly, truly cared about the girls. We were truly protected. We were respected."

The Dallas Playboy Club opened for business in 1977 on the second story of Expressway Tower on North Central Expressway, a building that now houses Veritex Bank and the east campus of Southern Methodist University. The club chain that started in Chicago became famous for hiring local women as waitstaff and requiring them to wear high heels, cutoff cuffs and tight, one-piece corsets complete with fluffy bunny tails. Each bunny also had to adhere to a strict regimen, weight restrictions and service rules in a detailed handbook that became known as the "bunny bible."

"We had an intensive training process, which you don't get in most cocktail waitress jobs," says former bunny Karen Drennan of Flower Mound, who recently retired as an algebra teacher. "There was training on the 'bunny dip'" — bending at the knees to table level — "while serving drinks, how each drink is garnished, the Playboy way and stuff like that."

The clothes requirements didn't leave the club's owners short of suitable waitstaff. Thousands of women tried out for jobs at the club, and only 188 made the final cut.

"It was the glamour," says Mary Ann Russell of Dallas, who got a job as a bunny near the end of the club's run in 1981. She met some bunnies in a local fashion show and attended the tryouts with her boyfriend. "It seemed like fun, and just being a 19-year-old girl, I was looking for something more interesting than working in a boutique."

The Dallas Playboy Club was the first in the chain to be franchised to an entity outside of Playboy's empire. Tommy Finn, the club's public relations director, says Hefner was still deeply involved with the club's development and opening. He even set up a makeshift office in the penthouse suite of The Fairmont that he renamed the Playboy suite because "he hated the name."

"He was the symbol, and he knew it," Finn says. "He did all the interviews and publicity schtick, and when there wasn't publicity around, he was pretty tough to work for. He stayed pretty hard on those guys. Most of the times I was around him, it was in public, and he was always very gracious and fun and nice to everybody around him. It was all just part of the sales speech of the Playboy lifestyle."


The nightclub opened with a large game room complete with bumper pool and the iconic Playboy pinball machine; showroom that featured performances by comedians such as "Professor" Irwin Corey and George Gobel and singers such as Frankie Avalon; and a disco where "bunnies were encouraged to put their trays down and dance with the customers if they wanted to and they had finished their rounds," Drennan says.

"When it was crowded and busy, we had to wear pointed-toe shoes and high heels," she says. "Our feet would hurt, and we'd be in excruciating pain from all the running around. We would pay the busboys to massage our feet in between breaks."


"It drew a lot of Cowboys because it was more of an upscale club. We had to be dressed pretty nice to go in and mingle with the crowd and the Playboy bunnies and stuff." — Former Dallas Cowboy Drew Pearson

The Dallas Playboy Club quickly became a Dallas hot spot in its opening year. Visitors purchased membership keys and waited in line for up to two hours just to get in the front door. Finn says they had to shut down the building's escalators because of the crowds that lined up each night.

The Dallas Playboy Club also attracted visits from celebrities such as Ben Vereen, Michael Cole from TV's Mod Squad and Olympic decathlete Caitlyn Jenner. The club was in the same building as the Dallas Cowboys' main headquarters, so star players like Roger Staubach, Ed "Too Tall" Jones, Bob Hayes and Drew Pearson became some of most familiar guests.

"It was one of the hottest places in town," says Pearson, the former Cowboys wide receiver who now hosts The Drew Pearson Show on Fox Sports Southwest. "It drew a lot of Cowboys because it was more of an upscale club. We had to be dressed pretty nice to go in and mingle with the crowd and the Playboy bunnies and stuff. The best thing is it was on the second floor, so you didn't have to go past the Cowboys offices."

The club promised guests a good time, but Drennan, and Parrish say it never turned into anything as raucous or seedy as the modern strip club.

"We were all treated with respect, and the bouncers kept the customers from touching us," Drennan says. "We were very comfortable living in that environment. They treated us with more respect than the typical cocktail waitress job. They would walk us to our cars at night and wouldn't let the customers touch us. We were very well protected." 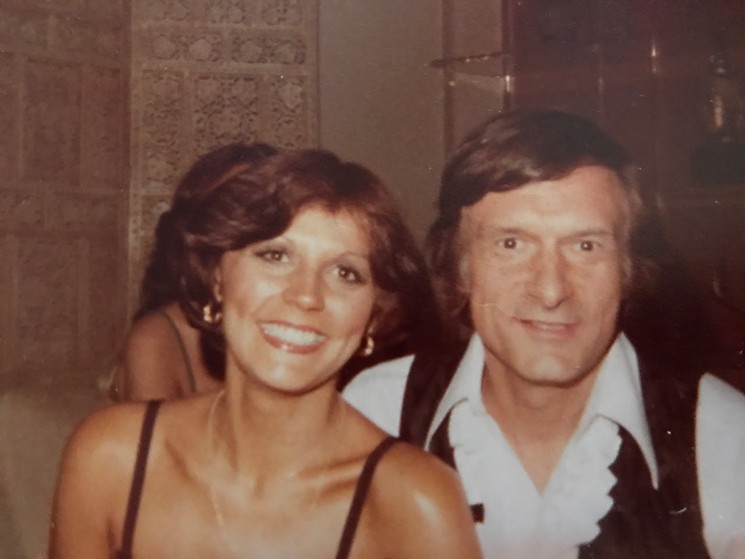 "This was a very liberal brand in a conservative state," Finn says. "They were aware of the criticism of it, and the club was aware of it. As far as I knew, it was a squeaky-clean operation and a huge financial investment. So they wouldn't put up with things like drugs or prostitution."

The women who worked at the club were also well compensated. Parrish says they could make up to $700 on a good night and had health insurance.

The club's popularity started to decline after its opening year. Competing nightclubs opened along Greenville Avenue and slowly siphoned the Dallas Playboy Club's clientele. If competitors' numbers dipped, they would remodel and rebrand. Finn says the Dallas Playboy Club didn't have that option because of its branding, and "the novelty wore off."

"Its demise was the strip clubs that opened around that time," Russell says. "Guys thought, 'Why should I see a woman in a bunny suit when I can see a practically naked woman?'"

Both the club and the brand's founder left personal legacies for the women who worked there. Drennan says the job shifted between hard work and fun, but it also allowed women to form friendships that are still strong.

"For me, it was really a means to an end for a paycheck, but I had such a great camaraderie with the girls who worked there that it was like a sorority, and it still is," Drennan says. "Forty years is a long time to stay in contact with those friends, and not just to call to see each other and get together. It was such a good atmosphere to work in and made it so nice that it felt like I had a family even after I left."

The women who worked as bunnies at all of Playboy's now-defunct clubs don't just keep up with each other over the phone and social media. They also arrange meetings and reunions like old high school chums and comfort each other in more trying times.