Rise Up: Stonewall and the LGBTQ Rights Movement at the Dallas Holocaust and Human Rights Museum
The Stonewall Uprising of 1969 brought the issue of LGBTQ rights to the forefront of America's consciousness, igniting a movement that led to the advancement of LGBTQ people in many facets of life. But the movement was fueled by years of demonstrations, federal legislation and the dedication of people who fought for equality. The Dallas Holocaust and Human Rights Museum (300 N. Houston St.) examines the history of LGBTQ rights and pivotal moments in American history with an exhibition called Rise Up: Stonewall and the LGBTQ Rights Movement that will run through June 18. The grand opening is at 7 p.m. on Wednesday, Jan. 25, with a reception and self-guided tours at 6 p.m. Tickets are $10 per person (free for museum members and virtual visitors on Zoom), and can be purchased online at dhhrm.org.

Goonies Movie Party at Alamo Drafthouse Cedars
Hey, you guys! Do you remember the last time you saw The Goonies in a movie theater? If you answered "recently," then you're either lying or you own your very own movie theater chain. Now you can go on the search for One-Eyed Willy's long-lost treasure with Data, Chunk, Mikey and the rest of the gang on the big screen with the Goonies Movie Party at the Alamo Drafthouse Cedars (1005 Botham Jean Blvd.) starting at 6:30 p.m. Tickets are $15 per person and can be purchased at the box office or online at Drafthouse.com/dfw.
click to enlarge

Seussical Kids at the North Texas Performing Arts Center
Are you tired of reading Dr. Seuss books to your kids? Then let someone else do it. And with songs. The kids will enjoy this live musical performance starring some of the good doctor's favorite characters — such as Horton the Elephant, The Cat in the Hat and more — at the North Texas Performing Arts Center (12300 Inwood Road). Catch it at 7 p.m. on Thursday, Friday and Saturday or at a matinee performance at 2 p.m. Saturday for $14 per person, or $25 if you want a seat in the front row in the black box theater. You can pick up your tickets at the theater or online at ntpa.org.

Peng Dang at Dallas Comedy Club
The Dallas comedian whose #StopAsianHate video went viral and prompted new awareness about Asian-American citizens is now headlining his own shows. He'll be at the Dallas Comedy Club (3036 Elm St.) on Friday and Saturday. Dang came to the U.S. from China when he was 25 and started doing comedy in Atlanta before moving to Dallas, where he's performed all around the city. Since then, he's taken his act on the road and become a regular performer at the Comedy Cellar in New York City. He's also performed in the Tower City Comedy Festival, the Portland Comedy Festival and the Dallas Comedy Festival. Catch him live at Deep Ellum's Dallas Comedy Club at 7:30 and 9:30 p.m. on Friday and Saturday. Tickets are $25 and can be purchased at the club or online at dallas-comedyclub.com.

Middle Aged Southern Women vs. Hollywood at Stomping Ground Comedy Theater
Stomping Ground Comedy Theater (1350 Manufacturing St.) premiered its first, full-length scripted comedy this month, and it sold out on opening night. So if you missed your chance to see it, you'll get one more chance this Friday and Saturday. Middle Aged Southern Women vs. Hollywood tells the story of two girls who screen a faith-based remake of Star Wars at a church lock-in and ruffle more than a few feathers of the faithful in this comedy by Kent Wicklander and Houston Hardaway. The show starts at 9 p.m. on Friday and Saturday. Tickets are $20 and can be purchased online at stompinggroundcomedy.org.
click to enlarge 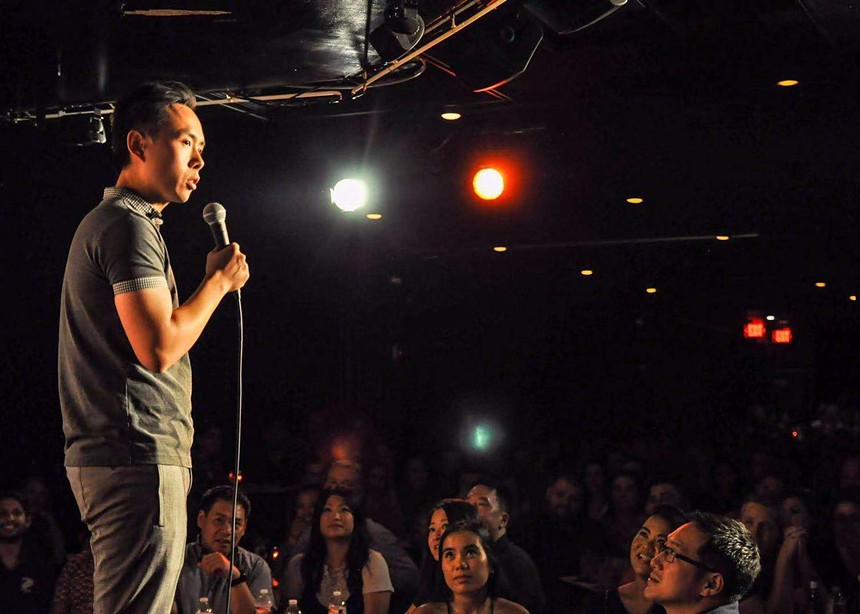 Don’t Let the Pigeon Drive the Bus! The Musical at the Dallas Children’s Theater
Children's author and artist Mo Willems' classic tale of a feathered fellow trying to shake the shackles of his identity on a fateful bus trip has made its way to the stage. Don't Let the Pigeon Drive the Bus! The Musical retells Willems' zany story about the world's most daring pigeon with puppets and songs that celebrate the Caldecott-winning children's book. The new stage musical at the Dallas Children's Theater (5938 Skillman St.) premieres at 1:30 p.m. on Saturday with additional performances on Sunday at 1:30 p.m. and 4:30 p.m. The show will run every Saturday and Sunday through Feb. 19. Tickets are $25 for grown-ups, $24 for kids and $20 for seniors, and can be purchased online at tickets.dct.org.

Too Cold to Hold Half Marathon Run at Norbuck Park
The cold weather gives us a great excuse to stay inside, drink hot chocolate and catch up on shows instead of mixing with people. But that doesn't mean you can't exercise. Some studies say that it's better to go for a run when it's cold because your heart doesn't have to work as hard and you don't sweat as much. We hear there's also something about harsher conditions clearing up asthma. We're not doctors, but we can recommend you put on your best pair of running shoes and prepare to be at Norbuck Park (200 N. Buckner Blvd.) at 8 a.m. Saturday for the Too Cold to Hold 5K, 10K or Half Marathon run. Registration is $45 for the 5K run, $60 for the 10K run and $99 for the half-marathon if you purchase them online before Friday at runproject.org. The prices increase to $59, $69 and $119 for the race on the day of the event. 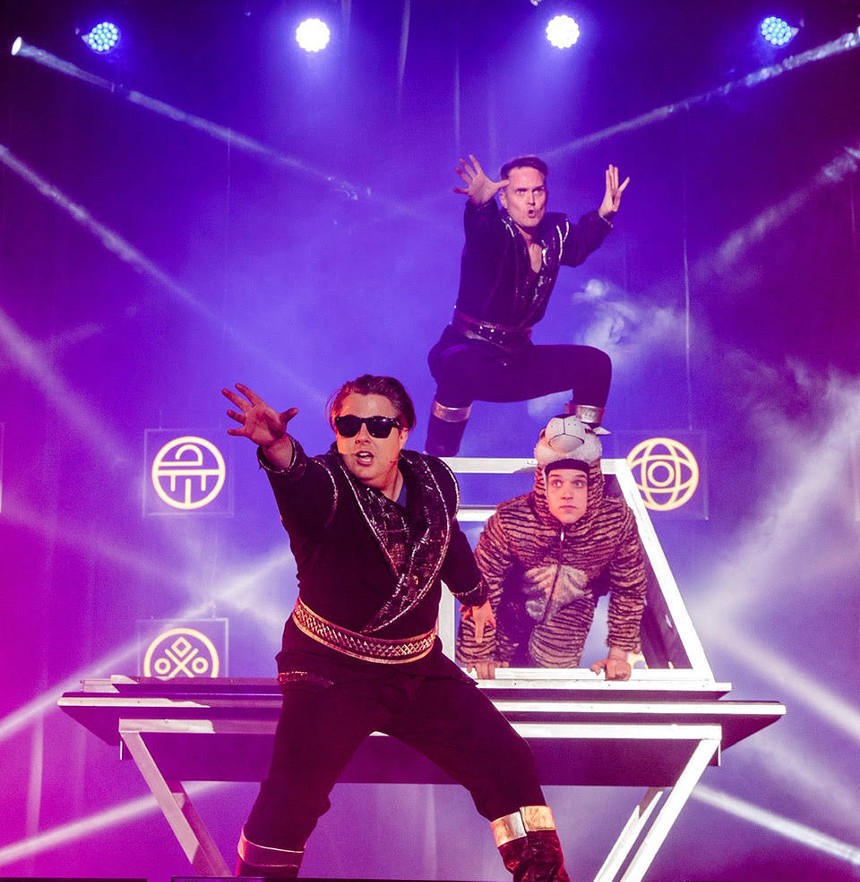 Young & Strange at Arlington Music Hall
Magic has come a long way from the showy, fancy days of the artform. Now it's intentionally funny. Richard Young and Sam Strange are better known as the magical comedy duo of Young & Strange, puzzling audiences using a variety of magic techniques from close-up magic to massive stage illusions involving huge and dangerous pieces of machinery. They've performed around the world and appeared on magic shows such as the CW's Penn and Teller: Fool Us. The two are taking their "Delusionists" show to the Arlington Music Hall (224 N. Center St.) for one performance only at 6 p.m. on Sunday. Tickets are $32–$82 and can be purchased at the box office or online at arlingtonmusichall.net.

The Searchers on 35mm at the Texas Theatre
See one of the greatest Hollywood Westerns ever made the way it was meant to be seen: on a huge movie screen in its original format. The 1956 Western revenge saga The Searchers, starring John Wayne, Patrick Wayne, Ward Bond and Natalie Wood, will have a special 35mm screening at 3 p.m. on Sunday at the Texas Theatre (231 W. Jefferson Blvd.) in Oak Cliff. Tickets are $12 and can be purchased online or at the box office at thetexastheatre.com. The Dallas Mavericks' Luka Dončić accepts the NBA's Rookie of the Year award in 2019.
Kevin Winter/Getty

Detroit Pistons vs. Dallas Mavericks at the American Airlines Center
We get it. The Dallas Cowboys blew another perfectly good season right in the middle of the playoffs. So what are you gonna do about it? Just sit there and stew until training camp starts or go out and support one of Dallas' other top-tier teams as they fight for a spot in the finals? You're damn right you're gonna go to the American Airlines Center (2500 Victory Ave.) and scream your guts out for the Dallas Mavericks as they take on the Detroit Pistons at 7:30 p.m. Tickets prices range between $18 and $2,800 (and if you can afford courtside seats, can we go with you?) at the box office or on Ticketmaster.

Test Your Mic at the Arlington Improv
You think you're pretty funny, don't you? First of all, why are you so antagonistic right now? I mean, that Cowboys loss was heartbreaking but, man, let it go. If you're the kind of person who thinks you're funny — and not in a "Are you lookin' at my girlfriend?" kind of way — why not find out for sure? The Arlington Improv (309 Curtis Mathes Way) presents a weekly Test Your Mic open mic showcase starting at 6 p.m. (doors open at 5 p.m.) on Tuesday, hosted by comedian Joel Runnels Jr. The show is free and open to anyone 18 and up; there's a two-item minimum. Reserve your table at improvtx.com/arlington.
KEEP THE DALLAS OBSERVER FREE... Since we started the Dallas Observer, it has been defined as the free, independent voice of Dallas, and we'd like to keep it that way. With local media under siege, it's more important than ever for us to rally support behind funding our local journalism. You can help by participating in our "I Support" program, allowing us to keep offering readers access to our incisive coverage of local news, food and culture with no paywalls.
Make a one-time donation today for as little as $1.