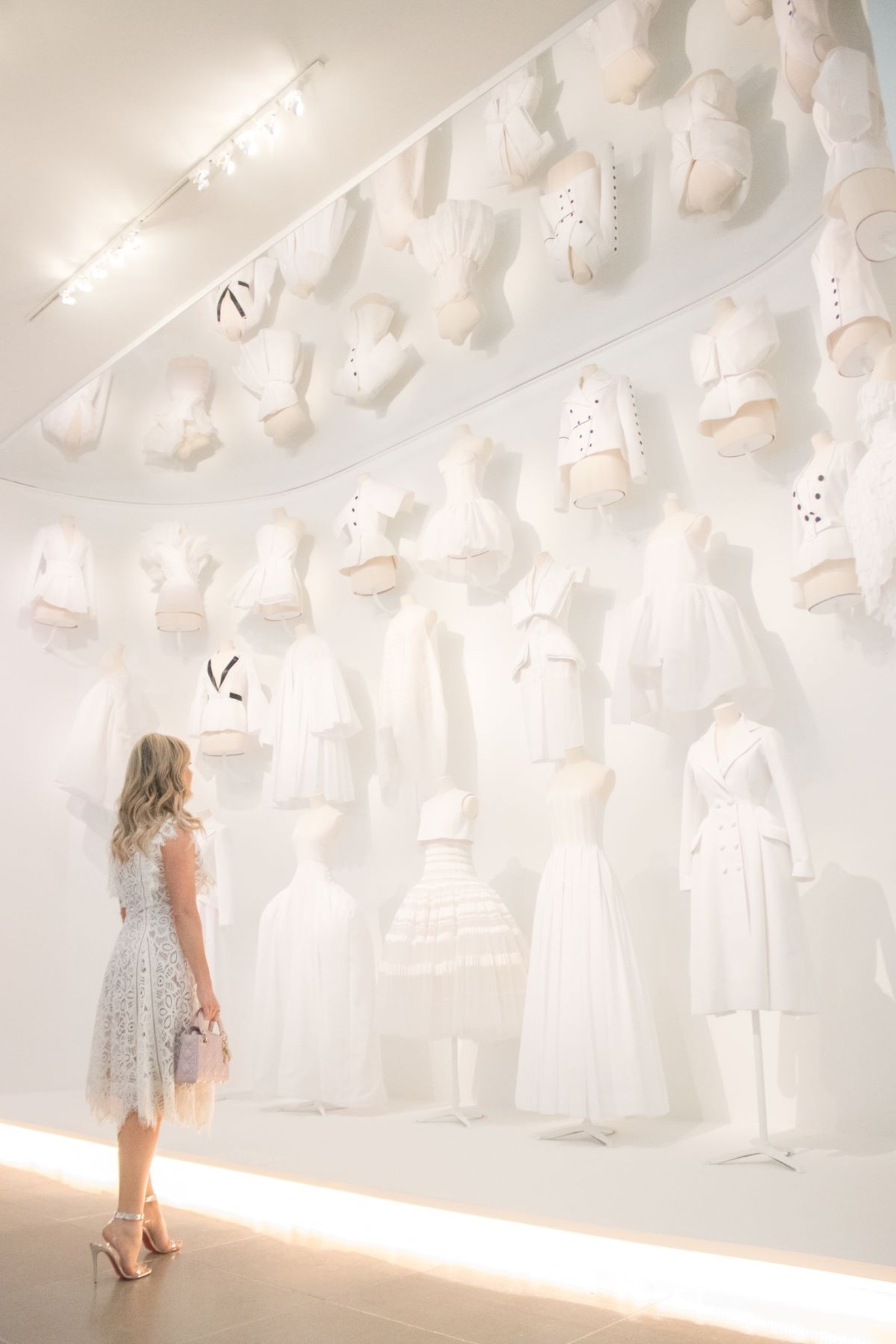 A row of white garments in the dazzling Dior retrospective at the DMA Will von Bolton, courtesy Stephanie Seay
In past years, the Dallas Museum of Art has honored haute couture with captivating exhibitions, from the high-tech showing of Jean-Paul Gaultier’s outlandish designs to the sculptural avant-garde whimsy of Iris Van Herpen. The DMA's latest fashion retrospective is about the most iconic name yet. Dior: From Paris to the World opened Sunday and runs through Sept. 1, and offers a comprehensive look at the House of Dior’s 70 years of unparalleled influence with a story told through sketches, photographs, accessories and a stunning collection of close to 200 pieces of couture.

The showstopping exhibition acknowledges Christian Dior’s time in Dallas, when a young Stanley Marcus invited the French designer for his first trip to the United States and granted him the Neiman Marcus Award for Distinguished Service in the Field of Fashion. Dior's designs emerged in the immediate aftermath of World War II and revolutionized the field of fashion by dictating a style that favored luxurious flower-like femininity. The master couturier is profiled through a joyous retrospective look as detailed as the work itself, including photos of Dior in his atelier and his own memorabilia from trips to Dallas.

The rooms are carefully curated to highlight the exquisite craftsmanship of the house’s various artistic directors, including renowned designer Yves St. Laurent and the immediately recognizable touch of John Galliano. The pieces are paired with the museum’s own art, complementing the style and times displayed in each section, showing the progression of fashion and creativity applied through the eras, from coquettish 1940s garbs through the bold 1980s, and samples from the newest collections.
click to enlarge

J'adore pour toujours.
Kristin Colaneri
At a press preview last week, DMA director Agustín Arteaga compared the retrospective to “walking into a cathedral of fashion.” The exhibition indeed delivers the reverent attention that a fashion god and such a body of work demands, with an entire gallery laid out as a runway spotlighting the last seven decades of red-carpet ensembles and African and Dia de los Muertos-inspired couture. Encased in lighted displays high above one’s line of vision, like religious iconography shining down upon those worshipping at the altar of high fashion, some looks will be familiar. There’s Nicole Kidman’s 1997 Oscars gown and Natalie Portman’s embroidered flower dresses from her Ms. Dior fragrance campaigns; more striking are the rows of simple white or black dresses that exhibit only the intricacy present in even the most subtle of Dior's designs.


“(It's like) walking into a cathedral of fashion.” — Agustín Arteaga

A version of the exhibition was showcased in London and in Paris, but Dallas is one of only two U.S. cities, along with Denver, to see it in its current form. The museum offered a VIP opening on May 14, which brought in industry icons like actress Kate Bosworth, Vogue’s Hamish Bowles and Dior’s own current artistic director, Maria Grazia Churi.

The exhibition, in conjunction with DMA senior curator Sarah Schleuning, was curated by fashion historian Florence Müller, who was present at the press preview, and who managed to expertly arrange a collection representative of the fashion house’s varied eras and colossal scope of influence since Dior’s beginnings through the modern era. Ultimately, the exhibition satiates the fashion-curious and history enthusiasts alike, but also appeals to those generally seeking to be visually moved by an alternate medium, a functional art which borders on art decoratif. The showing is timed, allowing each visitor an hour to walk through the rooms and take in every shape and inspired bit of stitching.

Until Sept. 1, the Dallas Museum of Art will be a cathedral to the fashion gods.
DMA/ James Florio
KEEP THE DALLAS OBSERVER FREE... Since we started the Dallas Observer, it has been defined as the free, independent voice of Dallas, and we'd like to keep it that way. With local media under siege, it's more important than ever for us to rally support behind funding our local journalism. You can help by participating in our "I Support" program, allowing us to keep offering readers access to our incisive coverage of local news, food and culture with no paywalls.
Make a one-time donation today for as little as $1.